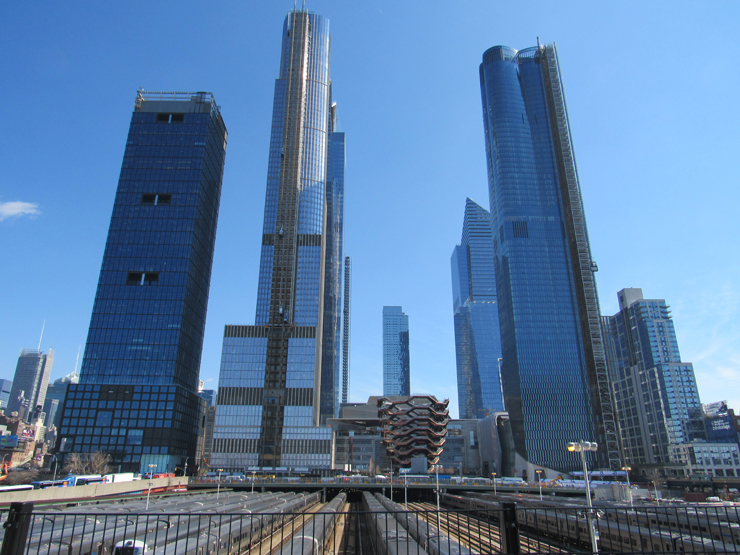 The Hudson Yards project, looking east from the High Line Viaduct. The 30-track Long Island Rail Road Caemmerer Yard in the lower part of the photo will eventually be covered by the second phase of the project.
Ralph Spielman 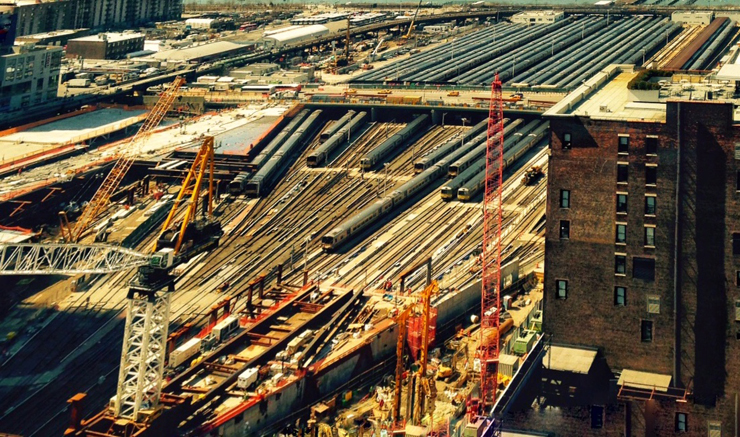 Hudson Yards construction had just started when this picture was taken on April 2, 2015. The first part of the development, in the lower center area show, opened on March 15, 2019. The second phase is projected to be completed in 2035.
Ralph Spielman

NEW YORK — In a Friday ceremony, New York welcomed the opening of the Hudson Yards development, a new West Side project built over the remnants of a former New York Central rail yard.

Friday’s ceremony, for what is now the largest real estate development in the United States in terms of financial ranking, marked the formal opening, although the first office building opened in May 2016. A public square and garden, a viewing platform known as Vessel, an entertainment venue with a retractable roof, and a one-million-square-foot, high-end shopping mall were part of the noon opening. Also open are two office buildings and a residential building; a hotel will open in June, with two more office buildings to come.

The original yard at the site was the New York Central West 30th Street Yard, which became an offloading point for refrigerated meats and produce for truck delivery in the New York metropolitan area. By 1980, freight traffic to the northern end of Manhattan had ceased, and the yard was sold for real estate development. A small piece was kept and became the Long Island Rail Road’s Caemmerer Yard, used to store commuter trains between runs.

The development of what came to be known as The Far West Side, encompassing the former yard and surrounding blocks, was tied into New York’s bid the 2012 Olympics in 2000, which used the land over the yard for an Olympic stadium. The Olympic bid was rejected by local political pressure five years later, but the plan for development above the tracks became a reality with the 2009 sale by the Metropolitan Transportation Authority of the air and decking rights to developers for over $1 billion.

Friday’s ceremony culminates an 11-year process by Related Companies and Oxford Properties Group for this part of the development over the 30 yard tracks.

“It’s a rare opportunity to be able to create a neighborhood of this size and impact, let alone in New York City,” said Related’s Chairman, Stephen M. Ross.

Friday’s opening celebrated only the first half of the project. Another 13 acres of Hudson Yards will be built over the half of Caemmerer Yard. The expansion will include more residential buildings, an open lawn that will be turned into an ice-skating rink in the winter, a school, commercial space with more than 6.2 million square feet, and 4,000 housing units. Ground is expected to be broken next year, with completion by 2035.

Friday’s master of ceremonies, incidentally, was CNN anchor Anderson Cooper — who happens to be the great-great-great grandson of Cornelius Vanderbilt, the rail magnate who assembled the New York Central.