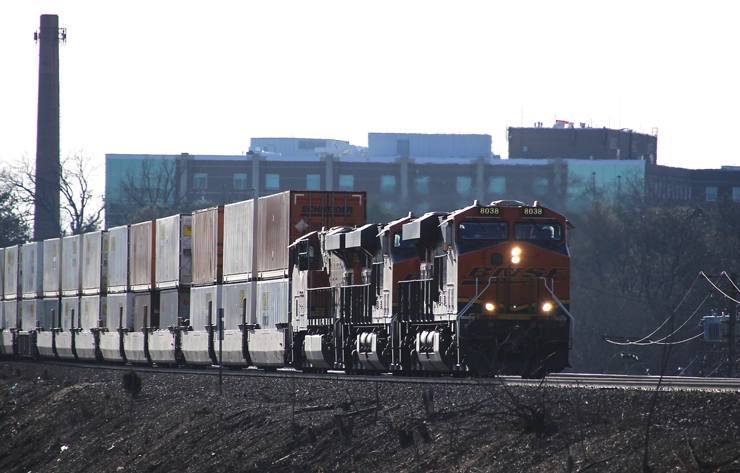 An eastbound BNSF intermodal train rolls through Western Springs, Ill., on March 7, 2020. A lull in international intermodal traffic is expected to last another four to six weeks.
TRAINS: David Lassen

Railroad traffic is expected to take a hit from the economic fallout surrounding the coronavirus pandemic.

International intermodal volumes have declined since China extended its Lunar New Year holiday to slow the spread of the illness. Factories have since been ramping up production, however, so the lull is expected to continue for another four to six weeks while containers make their way to ports and then across the ocean, says Todd Tranausky, a rail and intermodal analyst with FTR Transportation Intelligence.

“The carload side of the business has not yet seen any impacts, but our baseline economic forecast now indicates a short V-shaped recession in the middle of 2020 that carload is unlikely to escape unscathed,” Tranausky says. “The sharp reduction in crude prices we have seen over the last 10 days to two weeks will pressure crude-by-rail volumes and any remaining drilling sand volumes. Lower economic activity related to the coronavirus will limit electricity demand and make it even harder for coal to compete with now even lower-priced natural gas.”

Like other forecasters and some of the Class I railroads, FTR projects a surge in volumes related to pent-up demand once social distancing measures are eased around the globe.

“But the magnitude and timing of that event is fairly uncertain, as the timeline for resumption of normal activities changes day by day, if not hour by hour,” Tranausky says. “Right now, we would expect to see some of that bump occur in the late third or fourth quarters of 2020.”

Bloomberg analyst Lee Klaskow says Class I railroad earnings growth is likely to be reduced to low-single digit percentages, down from mid- to high-single digit growth this year.

Independent analyst Anthony B. Hatch says the pandemic’s economic effects will be unpredictable. Rail traffic was already expected to be relatively weak this year due to lukewarm manufacturing and ongoing trade uncertainty.

“Now there is no guidance,” he says. The most uncertainty, Hatch says, revolves around the demand side of the economy and what and how much consumers will buy.

Railroads are likely to respond by cutting costs as freight traffic slumps. Traditionally this has meant running fewer trains and furloughing train and engine crews in line with the reduction in volume.

At an investor conference on Tuesday, Kansas City Southern executives said they were unaware of any KCS customers who had shut down facilities or scaled back either their operations or production amid the pandemic.

But the United Auto Workers on Tuesday urged the Big Three U.S. automakers to shut down their plants for two weeks as a way to protect workers from the spread of COVID-19. The automakers instead agreed to partial shutdowns of plants to allow for increased disinfecting.

Volkswagen and Fiat Chrysler have shut down some assembly plants in Europe, and Ford has shut down a plant in Chicago that ran out of parts.

Auto-related business represents around 5% of U.S. rail traffic. KCS was bracing for a downturn in automotive traffic because big-ticket purchases are the first thing consumers stop making in an economic downturn, Upchurch says.

Like other railroads, KCS is prioritizing the health and safety of its workforce amid the pandemic, CEO Pat Ottensmeyer told the conference. The railroad is now dispatching its system from multiple locations rather than just the centralized dispatching center in Kansas City and has stepped up cleaning of locomotive cabs, among other steps such as elimination of unnecessary travel.

Thus far there has been no disruption of railroad operations, the executives stressed.

Upchurch says KCS has a strong balance sheet, an untapped line of credit, and plenty of free cash to weather a pandemic-related downturn.

Ottensmeyer noted that KCS is modeling financial scenarios worse than what the railroad saw during the financial crisis that spawned the Great Recession in 2008 and 2009.