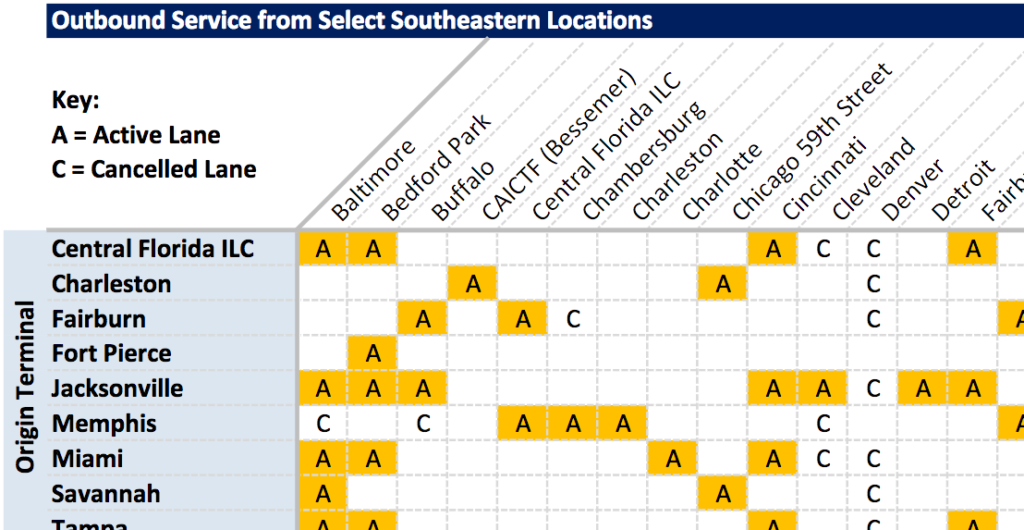 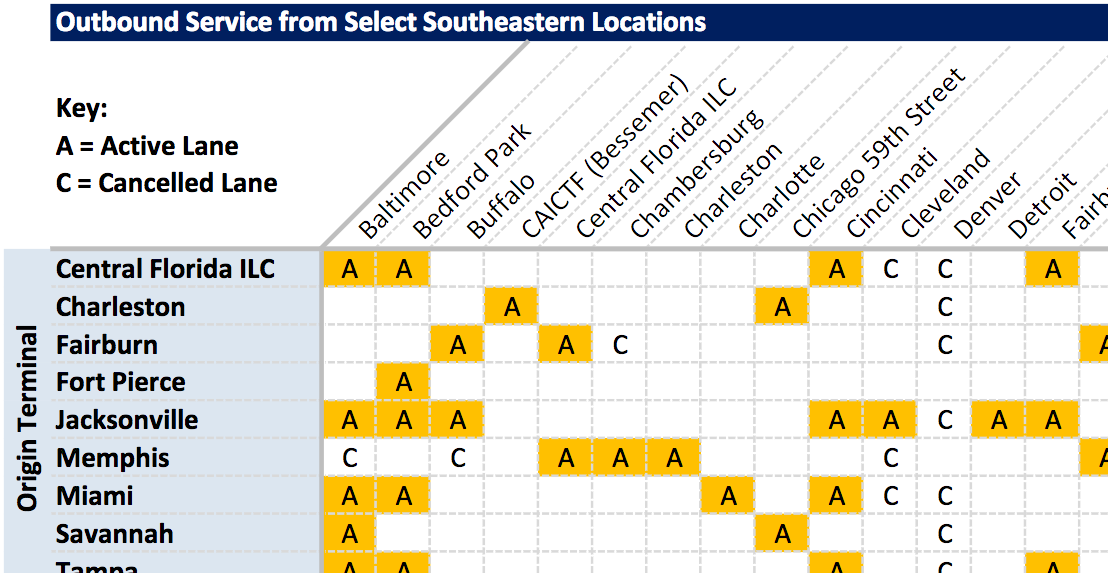 A partial screen image capture of a CSX Transportation grid outlining intermodal service changes throughout its network.
CSX Corp.
JACKSONVILLE, Fla. — CSX Transportation is pruning domestic intermodal service in several low-volume lanes linking the Southeast and Northeast, along with some interline service with Union Pacific, as the railroad makes sweeping changes to its network under CEO E. Hunter Harrison.

The affected terminals in the Southeast include five locations in Florida, plus Atlanta; Charleston, S.C.; Savannah, Ga.; and Memphis, Tenn. Combined, these Southeastern terminals will continue to originate traffic in more than 110 lanes and receive containers from more than 160 lanes.

CSX told customers the changes were being made “to improve service, efficiency, and better align product demand.”

CSX spokesman Rob Doolittle says the changes are part of a review of intermodal operations as the railroad implements Precision Scheduled Railroading.

“We are working to identify opportunities where we can improve service to our intermodal customers by leveraging other parts of our scheduled network to provide faster and more efficient service,” Doolittle says. “In some cases, this may mean using scheduled merchandise trains to support some intermodal customers’ requirements, and reducing the intermediate handling of intermodal traffic when possible, creating more reliable service and faster transit times.”

The railroad will curtail service between the Southeastern terminals and smaller markets in the Northeast, including Cleveland, Buffalo, and Syracuse, N.Y., as well as Montreal.

The changes are related to scaling back container sorting at the Northwest Ohio Intermodal Terminal. The unique terminal in North Baltimore, Ohio, is a key to the hub-and-spoke strategy CSX has used to serve lower-volume intermodal markets. But its days as a sorting hub are numbered, sources have told Trains News Wire.

Harrison declined to answer a question about the fate of North Baltimore — and the hub-and-spoke system — during CSX’s third quarter earnings call with Wall Street analysts on Tuesday. The railroad will provide additional details during its investor day presentations later this month.

The other announced changes from the Southeast terminals affect interline service with UP to and from destinations in the West, ranging from Portland, Ore., and Oakland, Calif., to Denver and Phoenix, as well as points in Mexico.

This is the latest wave of cutbacks related to traffic funneled through the North Baltimore terminal. Earlier this month, CSX announced a reduction of service to and from Louisville, Ky., Detroit, and Columbus, Ohio, to various points on and off the CSX system.

CSX published a full grid of the changes online.