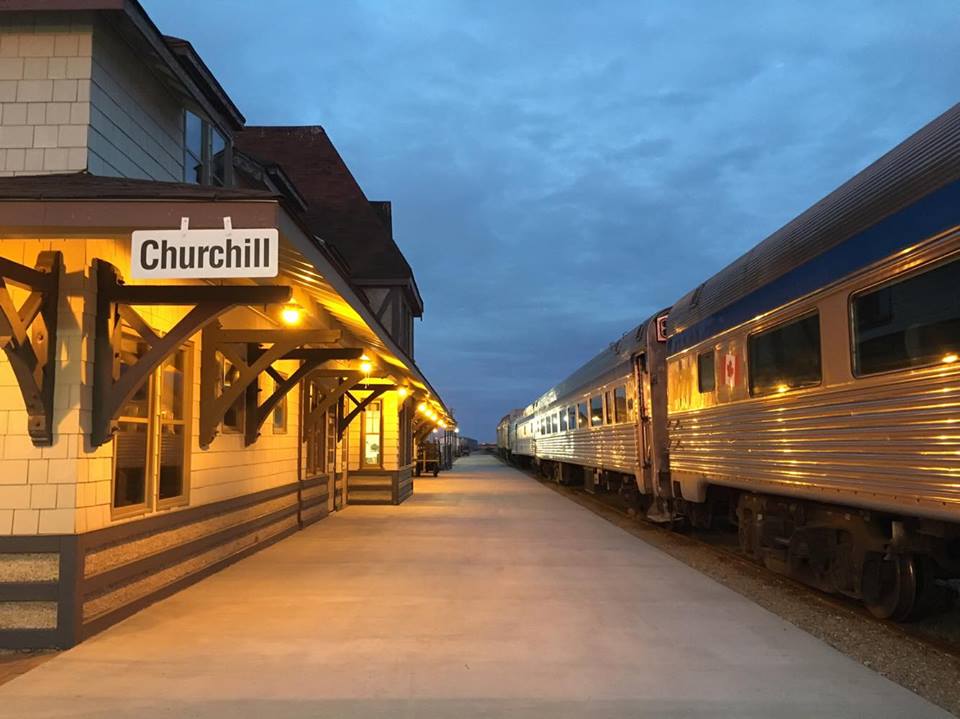 A marooned VIA Rail train at Churchill, Manitoba
Joe Stover
MONTREAL, Quebec — Stormy weather on Hudson Bay means it will be a few more days until VIA Rail Canada can rescue a stranded passenger train by ship.

The MV Nunalik sought shelter in Whale Cove, north of Churchill, Manitoba, for most of a day to escape stormy seas. It was due to Churchill on Oct. 14, but arrived this morning. The tug boat Keewatin has also arrived in port from St John’s, Newfoundland, to assist.

Moving the train by ship is VIA Rail Canada officials’ current plan to remove one entire consist of its Winnipeg to Churchill, Manitoba, train by sea, with the help of the Nunavut Eastern Artic Shipping’s arctic freighter.

MV Nunalik, which regularly calls at eastern Canadian ports between Valleyfield, Quebec, and Churchill set sail from Valleyfield on Oct. 5. After in-bound shipments are unloaded, outbound cargo, including the VIA consist, will be loaded and secured before the MV Nunalik sets sail and begins its return trip east and south for Valleyfield, calling at seven intermediate ports.

Making the journey south are F40PH-3 locomotives 6434 and 6402, baggage car 8601, coaches 8105 and 8118, dining car 8418 York, and 3 section — 8 roomette, 1 drawing room, 3 double-bedroom — sleeping car 8222 Chateau Richelieu. The consist has been marooned in the northern gateway city after the OmniTRAX’s Herchmer Subdivision became impassable north of Avery, Man., at milepost 355 due to 19 washouts and 5 damaged bridges.

Arrival in Valleyfield is expected to be in early November. It’s not yet known whether the VIA locomotives and rolling stock will be unloaded in the Port of Montreal en route to Valleyfield.

Loading is to take place at the extreme north end of the Churchill pier by means of the Nunalik’s own cranes. The VIA equipment will be moved over panel track from the end-of-track mid-pier. Once ship-side, the Nunalik’s crane’s will hoist the locomotives and rolling stock into the ship’s hold for the trip south. The Nunalik is now expected to leave the Port of Churchill on Oct. 18.