Municipally owned Illinois railroad expands on its history of ingenuity 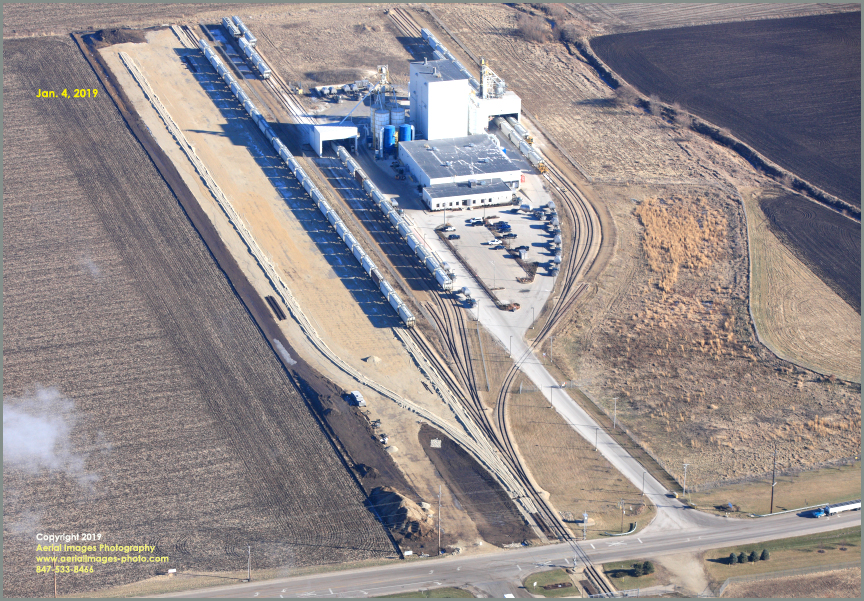 An aerial view of the new transload site, at left, adjacent to U.S. Silica’s Rochelle operation.
City of Rochelle
ROCHELLE, Ill. – The City of Rochelle has opened a new transload center and rail bridge for the city’s railroad and industrial park. The Rochelle Transload Center the new bridge were part of a celebration the city held Sept. 13 marking the opening of both and other non-rail infrastructure projects. The rail projects were funded by the Economic Development Administration, part of the U.S. Department of Commerce ($3.42 million), the Illinois Department of Transportation ($2.58 million), and the City of Rochelle ($1 million).

Rochelle’s city-owned railroad, which is operated under contract by Burlington Junction Railway, got its start in 1986. It began when Ken Wise, then Rochelle’s economic development director, went to Chicago & North Western after Wisconsin Cold Storage indicated it wanted to locate a warehouse in Rochelle to avoid rail congestion in Chicago. The C&NW signed on, but Wise also approached Burlington Northern, figuring two railroads would be better than one. BN and C&NW agreed to construct switches off their mainlines, and donated all the rail material to start the Rochelle Railroad, which served the single 100,000 square foot freezer warehouse. Since then the municipally-owned short line has grown to 12 miles serving 16 industries according to Jason Anderson, Rochelle’s current economic development director.

While the industrial park began with cold storage, other customers came on board including Boise Cascade and Wausau Lumber with wood products. The park was growing and handled about 3,500 rail cars year. Then came US Silica, which began transloading frac sand in Rochelle about four years ago. The sand business strained capacity, with yearly rail car totals shooting up to 12,000 to 13,000 cars.

With the added revenue generated by new business and with grant money, Rochelle was able to finance construction of the new transload facility, an additional three miles of track, and the rail bridge over the creek, which was built this summer. Three tracks are being extended an additional 3,500 feet to the south. “We now have the capacity to add more business and industry,” Anderson says. “The thing we really wanted was for this transload center to be a regional economic asset, because industries no longer have great access to rail since the Class I’s have pulled up the spurs and nobody wants to serve one industry at a time.” The city also owns its own Internet service provider, power company, landfill, and airport in addition to the railroad, all operated at a profit. “Between the rail projects, water and sewer projects, and industrial park road projects, we’re spending $50 million on infrastructure in a town of 9,200 people,” Anderson says.

BNSF has been aggressive in helping Rochelle land customers for the new facility. For the celebration on Sept. 13, BNSF invited potential and existing transload customers from the region, and hosted a luncheon for them after the celebration. Burlington Junction’s marketing people attended the luncheon as well to describe their services. Among the customers for the new transload are Manly Brothers of Indiana, a frac sand transloader, which is moving from a small spur in the park into the bigger center. BNSF and UP are working to place the new transload into their marketing and website systems, Anderson says.

“What we found from talking to BNSF and UP is there is a real demand for good transload access; I’m entertaining phone calls from both BNSF and UP customers,” Anderson said.

Both BNSF and UP used to move unit trains of frac sand into Rochelle, but UP stopped handling the unit trains when it instituted Precision Scheduled Railroading. BNSF continues to move the unit trains in and out of the facility. Business had been so good, according to Anderson, the city had to turn away business due to lack of capacity, but now with the transload open they have more capacity and can take on new business.

Anderson says the city is entering into discussions with BNSF about relocating its interchange. When they were built in 1986, the BN and C&NW interchanges were only 150 feet apart. Now because rail volumes are increasing so much more room is needed, and the city would like to move the interchange 3.5 miles south along city-owned right-of-way.

With Union Pacific idling its Global 3 intermodal facility in Rochelle, the city is exploring the idea of setting up an intermodal service through the City of Rochelle Railroad and BNSF, although nothing final has been worked out.

There is plenty of room for more expansion. “We’ve put roads, water, sewer, and power in to open up another 1,000 acres for rail access, which is adjacent to another 500 acres which we have been developing over the last 30-plus years around our railroad, so hopefully we will attract even more industry that wants rail,” Anderson said.