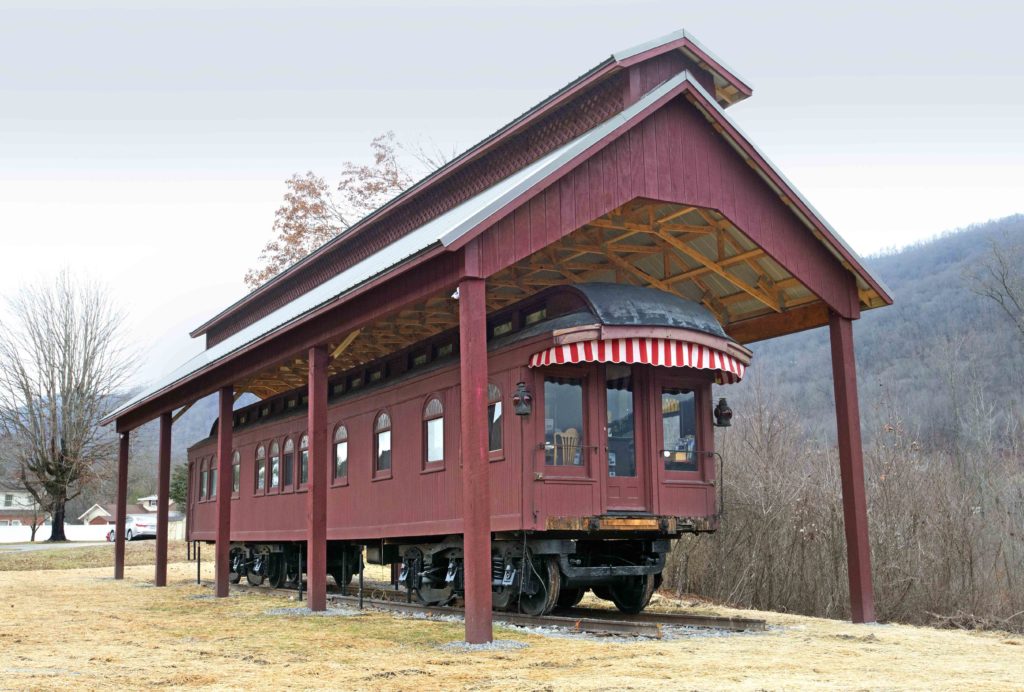 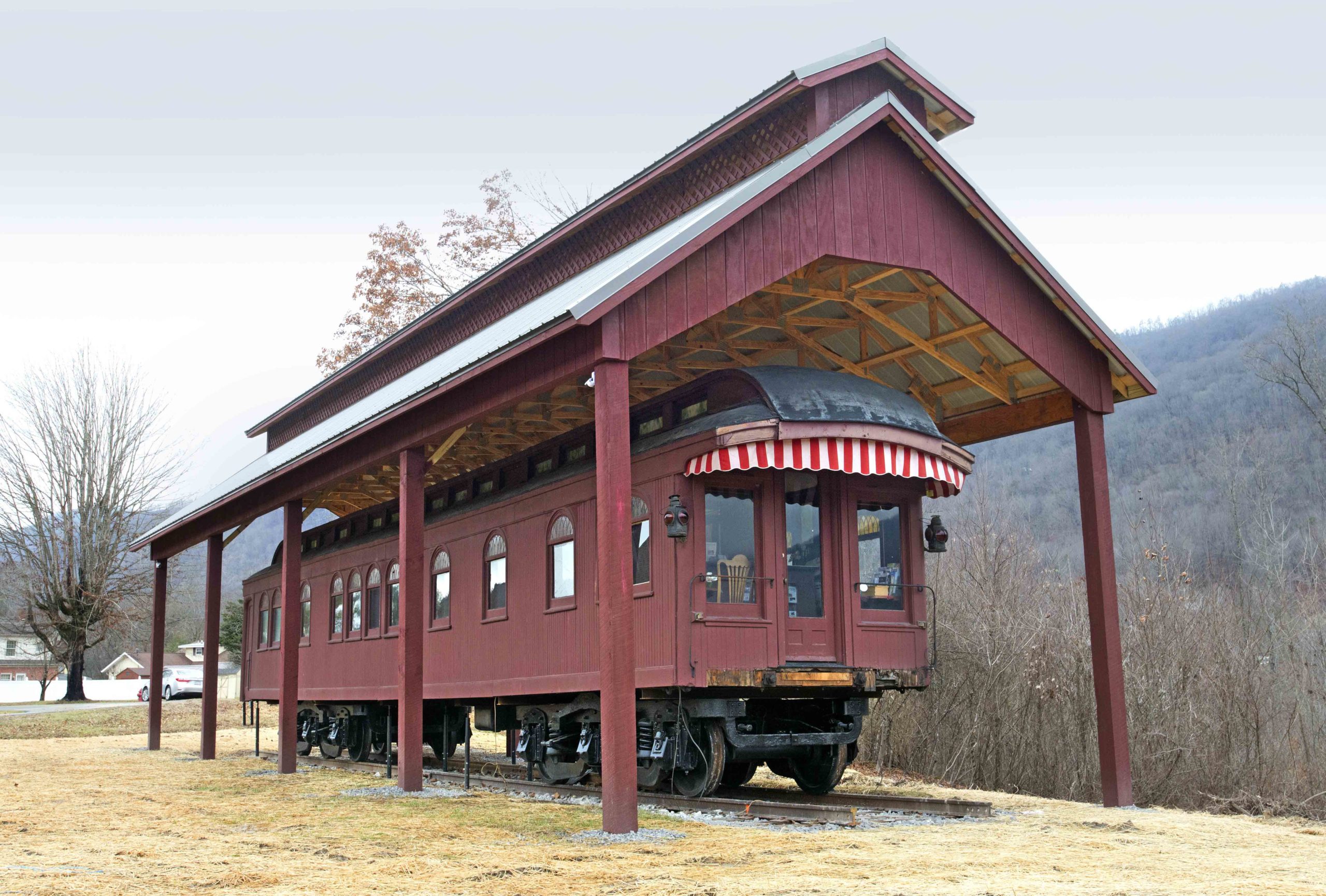 Interstate office car No. 101 has been saved yet again in Big Stone Gap, Va.
Ron Flanary
BIG STONE GAP, Va. — For wooden Interstate Railroad office car No. 101, life is starting anew at age 148. The car, located in Big Stone Gap, Va., and now under restoration for the second time in the last 30 years, is the oldest piece of Southern Railway rolling stock still in existence.
This obscure vehicle was built in the shops of the South Carolina Railroad in 1870. When successor South Carolina & Georgia was acquired by Southern Railway in 1899, the car became Southern office car No. 117. No doubt it was rebuilt at some point thereafter, since many interior drawers and other pieces are marked with that number to this day. In 1916 it was swapped to the Virginia & Southwestern Railway in Bristol, Va. for a newer car, thus briefly becoming V&SW No. 100. The paint had hardly dried on the new lettering when Interstate Railroad president H.L. Miller inquired if the Southern would part with the car. The deal was done, and on March 21, 1916 the already ancient car, which had been thoroughly refurbished and re-lettered for its new owner, left Southern’s Coster Shop in Knoxville, Tenn., for the short line’s headquarters in Andover, Va.
The Interstate would acquire a newer car with steel center sill in 1924, so that car became number No. 100, while old Southern No. 117 was downgraded a peg to car number No. 101. An Interstate employee who was charged with taking care of the road’s passenger equipment recalled the impetus for buying the steel car. “President Miller was goin’ to Cincinnati, and north of Winchester, Ky., on the L&N, they were ‘scattin’’ it. That old car went to poppin’ and crackin’ and screechin’. Mr. Miller got up and looked at the speedometer. That L&N engineer was makin’ about 80 MPH.” When Miller and the wooden office car returned to Andover, a purchase order for the steel underframe car was authorized immediately. The newer car was sold off during the tough times of the Great Depression in 1936, but No. 101 would hang on for what few times an office car would be needed. From that day forward, it was used sparingly, and never ventured off line again.
No. 101 was sold to a local coal company executive in 1959 and carted off into the woods above Dorchester, Va. for use as a hunting lodge. The six-wheel trucks were no longer needed, so the Interstate cut them up for scrap.
That’s where the trail went cold until 1988 when a successor company decided the car was in the way of a planned expansion of surface mining. It was offered for donation to any organization willing to take possession and move it immediately, at no expense to the coal company. A group of local leaders in Big Stone Gap, Va. banded together quickly and raised the necessary money to finance the move to Big Stone Gap, where it would be restored and put back into use as a regional tourist information center. Aided by both cash contributions and in-kind services, plus matching cash grants from the Commonwealth of Virginia, Interstate 101 was wheeled to its new location by a house-moving firm. In preparation for its arrival, the group had appealed to Norfolk Southern for a pair of passenger car trucks. Project volunteer Richard Watkins recalled being contacted by the NS agent in Andover letting him know a gon billed to the “101 Car Committee” had been spotted in the house track at Big Stone Gap for unloading. “We climbed up to look inside and found two four-wheel roller bearing trucks. We later learned they came from a wrecked Southern Pullman-Standard diner. Beggars can’t be choosers, so we called in a crane and went to work. It was better than having to put the car on blocks. It needed ‘feet,’ so that’s why we used those trucks.”
A reproduction of the rear observation platform was built by the local high school shop class, plus other missing parts were located from various sources. The car was restored inside and out and placed into operation within a few months of reaching its new location. A shed designed to mimic the look of a period train shed was later erected to protect the car from the elements. There, it served its intended purpose for the next 29 years, until the town opened a new tourist information center in the central business district. Thankfully car 101’s caretakers had established a savings account toward the day it might have to be moved again. After much planning and negotiation, the car was donated to the Virginia Department of Conservation and Recreation, to be a permanent exhibit at the Southwest Virginia Museum State Park in Big Stone Gap.
When the move was ready, Wasatch Railroad Contractors of Cheyenne, Wyo., was engaged to build a new display track at the museum. Moving the car was also an opportunity to address those too-modern trucks. Trains Editor Jim Wrinn, a long-time volunteer with the North Carolina Transportation Museum in Spence, arranged a truck swap. The museum supplied two unserviceable six-wheel friction-bearing, outside-equalized trucks nearly identical to those under 101 when it was in service. The museum took the roller-bearing four-wheelers in exchange. Again, Wasatch handled movement of the trucks from and to Spencer.
Car 101 is now in its new location, and the museum has already constructed a new shelter. As spring arrives, old Southern 117 will be given its latest overhaul and restoration. It will be repainted into the wine-red livery of its salad days on the Interstate, with imitation gold lettering. Everyone involved knew this was a priceless piece of railroad history, and great care has been taken to ensure it will be around for the long haul.
Interstate 101 will never have to endure structural torture hanging on the rear of an L&N passenger train running 80 mph, but it made it back home from that trip and was miraculously saved. Now, it will teach new generations of the heady days of coal mining and steam railroading in southwestern Virginia.