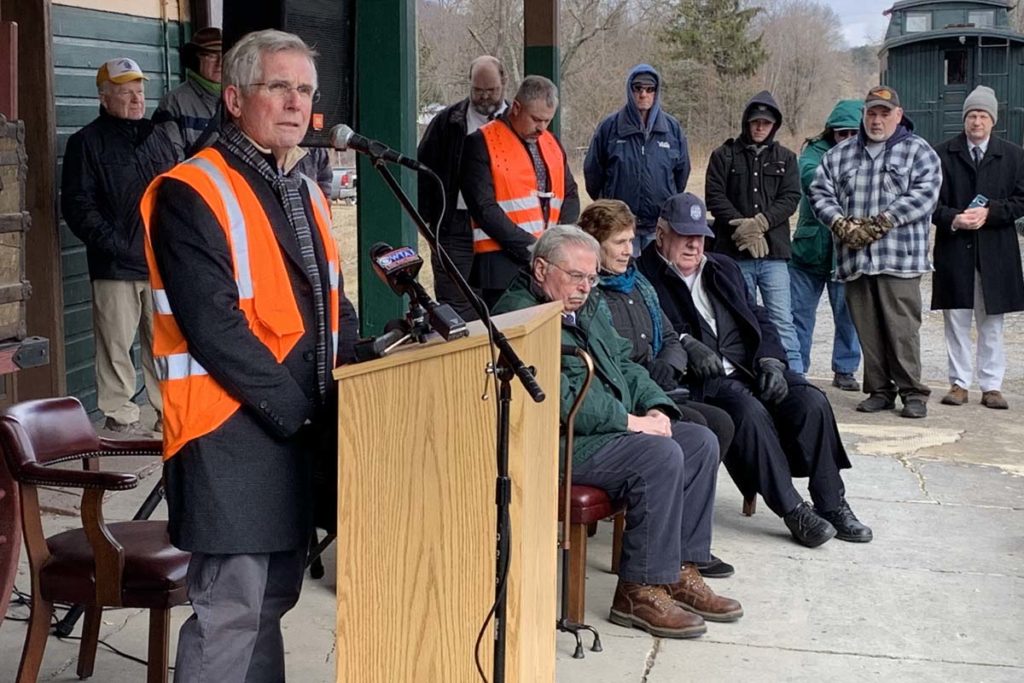 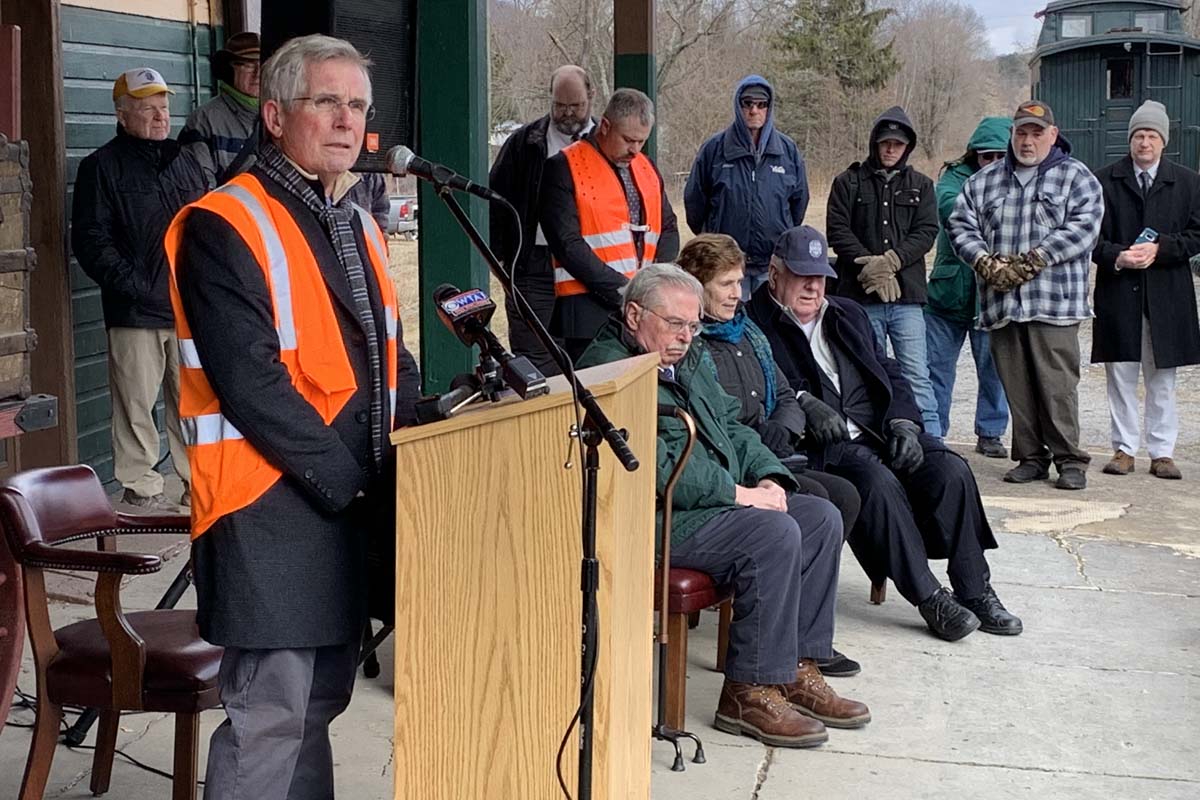 Wick Moorman addresses the crowd gathered on Feb. 14. Joseph Kovalchick, whose family has been longtime owner of the line, is seated in the black overcoat.
Rich Roberts 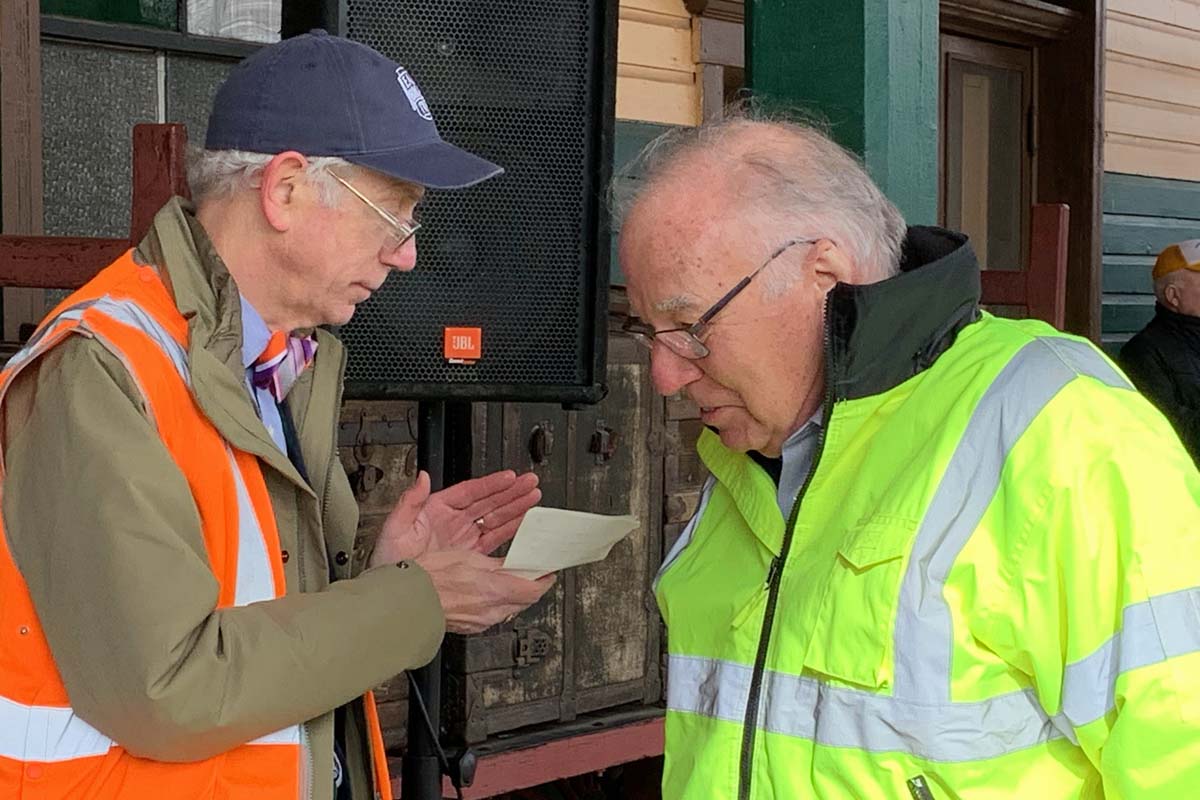 ROCKHILL FURNACE, Pa. – Sixty years ago, that quote by East Broad Top Railroad owner Nick Kovalchick signaled the first rebirth of the historic East Broad Top narrow-gauge railroad in central Pennsylvania. It came true again Friday with an announcement that the bulk of the 33-mile line, including six Baldwin steam locomotives, rolling stock, and extensive shops, has been sold to the nonprofit East Broad Top Foundation, Inc., which aims to reopen it for operation in 2021.

Organized by a group of railroad-industry executives and dedicated EBT fans, the foundation plans a number of “soft-opening” events this season, including marking the 60th anniversary of the August 13, 1960, start-up of the railroad’s tourist operation. The group’s goal is to rehabilitate five miles of tourist-era track from Rockhill Furnace to the wye at Colgate Grove, and to restore locomotives and rolling stock to permit steam operations to resume next year.

Speaking to a crowd of some 250 people, leaders of the group promised that “The torch having been passed, the East Broad Top is back.” The sale was completed Feb. 8.

Built in the 1870s, the three-foot-gauge line hauled primarily coal until the abandonment of local mines in 1956. When EBT closed that year, it was the last remaining narrow-gauge common-carrier railroad in the Eastern United States. It was bought by the Kovalchick Salvage Co. of Indiana, Pa., which in 1960 reopened a segment for tourist service in connection with a local bicentennial celebration. Under the Kovalchick family’s watch, including that of Nick’s son Joseph Kovalchick, EBT ran as a tourist railroad for a remarkable 52 seasons, closing at the end of 2011.

His father, Joe Kovalchick said Friday, went to 13 banks before finding one that would agree to loan him money for the down payment in 1956. Not having a toy trains as a child was the motivation for Nick purchasing the railroad, and when he bought it, he wanted to see it run again.

The sale ends decades of speculation and uncertainty over the future of the iconic line, a National Historic Landmark that is listed on the National Register of Historic Places. In the 1990s, Preservation Pennsylvania added EBT to its “Pennsylvania at Risk” list, and the National Trust for Historic Preservation did likewise, placing the railroad on its list of most endangered historic sites.

Among those who worked to organize the foundation were Lawrence Biemiller, longtime East Broad Top historian and frequent guide for shop and roundhouse tours; David Brightbill, EBT’s office manager; Brad Esposito, 20-year employee of the Buffalo & Pittsburgh Railroad and new general manager of the EBT; and Stephen Lane, entrepreneur, Amtrak employee, and volunteer at the Everett Railroad.

Principal backers of the foundation – and the three industry board members – are:

The three founding members of the board will be Biemiller, Brightbill, and Esposito. Of the community members, only one has been named thus far, Jane Sheffield, executive director of the Altoona-based Allegheny Ridge Corp., an economic development and heritage tourism agency. 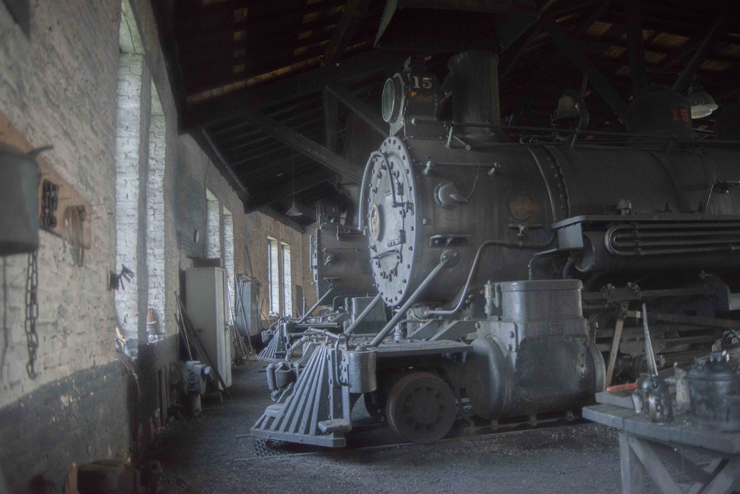 East Broad Top locomotives await a return to action in the narrow gauge railroad’s Rockhill Furnace, Pa., roundhouse. The railroad has been bought by a non-profit foundation which aims to return the railroad to service in 2021.
Dan Cupper
ORIGINAL STORY:

ROCKHILL FURNACE, Pa. — A non-profit foundation has purchased Pennsylvania’s storied East Broad Top Railroad and plans several events on the railroad in 2020, with the aim of resuming regular operation in 2021.

The EBT Foundation Inc., backed by prominent rail-industry figures and longtime East Broad Top fans, will own approximately 28 miles of railroad, as well as the narrow gauge line’s shops, rolling stock, and equipment. The purchase includes right-of-way from the south end of the concrete arch bridge over the Aughwick River below Mount Union to the road crossing in Wood Township.

The East Broad Top is a National Historic Landmark and is listed on the National Register of Historic Places.

“This is the best possible outcome for the railroad, which has been in my family for two generations,” said Joseph Kovalchick, whose father, Nick Kovalchick, purchased the East Broad Top Railroad & Coal Co. after its coal mines closed in 1956. “It is with a combination of pride and relief that we pass the torch in its second reincarnation.” The Kovalchicks will continue to own coal-company property that had been jointly owned with the railroad.

“When my father bought the company, it was never his intention to scrap the railroad. At the time he was the only one to stand for the EBT, and his role in the history books is assured. My generation has struggled to balance the need to preserve this national treasure with running it as a business, and I take pride in our role in its survival. But it is clear that a for-profit business model is not sustainable. Our faith in the new model is reflected in both the sale and the Kovalchick family’s ongoing role on the board of the new non-profit.”

Esposito says the EBT Foundation has a three-part mission: to preserving and operating the East Broad Top as a steam railroad; to educating visitors about the role of railroads in local and national history; and, to promote local and regional tourism and economic growth.

“The East Broad Top is a unique national treasure unmatched anywhere in the United States,” says Esposito. “It has been impressively preserved for over 60 years by the Kovalchick family. We are excited to pick up the torch and ensure that the railroad is preserved for future generations.

“Our close partners will be the volunteers of the Friends of the East Broad Top. They have contributed countless hours of work and significant amounts of money to help preserve the historic fabric of the EBT since 1983.

“Also, we look forward to working with the Rockhill Trolley Museum.” The all-volunteer trolley museum dates to 1960 and operates over the former Shade Gap Branch of the EBT.

“The East Broad Top is a remarkable survivor from the age of steam railroading,” says Moorman. “I’m delighted to have the chance to be a part of its revival, both for the preservation of such an important part of our industrial heritage, and for the economic benefits that it will provide to an area of Pennsylvania that is so closely linked to the railroad industry.”

Levin notes that the EBT runs through a bucolic landscape almost unchanged since the early 1900s. “The railroad’s historic fabric is an important component of the region’s industrial archaeology, and the educational possibilities here are almost limitless.”

The new organization’s advisors include Linn Moedinger, former president of the Strasburg Rail Road — one of the most successful tourist railroads in the U.S. — and Rod Case, a partner at the consulting firm Oliver Wyman who leads its railway practice. Among the organizations providing support is the Allegheny Ridge Corp., which manages the region’s state-designated Heritage Area. The corporation “is thrilled to participate in the rebirth of this great asset,” says Astride McLanahan, a longtime board member of the organization. “The EBT is a jewel in the Allegheny Ridge Heritage Area and its revitalization will bring economic opportunity to this rural community.”

Built from 1872 to 1874 to haul coal to a new iron furnace in the center of the state, the 33-mile-long East Broad Top survived the collapse of the local iron industry at the turn of the 20th century because the top-quality coal it carried had found other markets, thanks in part to close cooperation with the Pennsylvania Railroad. When the last of the coal mines closed in 1956, the East Broad Top was purchased by the Kovalchick Salvage Co. of Indiana, Pa. Despite being in the scrap business, the company left the railroad intact and in 1960 reopened a portion for steam-powered tourist trains that proved widely popular.

The 3-foot gauge railroad is the only surviving original narrow gauge line east of the Rocky Mountains.The railroad’s shops complex, which dates to the 1880s and was greatly expanded from 1905 to 1907, is among the most complete early-20th-century industrial facilities anywhere in the U.S.

Still in the railroad’s roundhouse in Rockhill Furnace are six steam locomotives built for the EBT by Philadelphia’s Baldwin Locomotive Works between 1911 and 1920. They share the building with the unique M-1 gas-electric, constructed at the railroad in 1927 with plans and parts from Philadelphia’s J.G. Brill Company, a leading streetcar manufacturer, and Westinghouse Electric. Other EBT equipment includes passenger cars believed to date to the 1890s and numerous steel freight cars built in the EBT shops. The East Broad Top was the only American narrow gauge to convert to an all-steel freight car fleet.

Remarkably, track remains in place over nearly the entire 33-mile main line, which connected the coal mines in Robertsdale to the Pennsylvania Railroad at Mount Union. The former PRR main line is now Norfolk Southern’s east-west route between Harrisburg and Pittsburgh.

“The East Broad Top Railroad is a unique historic asset that is a national treasure representing our area’s rich railroad heritage,” says state Sen. Judy Ward, who represents southern Huntingdon County. “The sale of this railroad to this group of longtime EBT enthusiasts who are committed to preserving and operating it as a steam railroad is very exciting news for the region because it preserves this irreplaceable treasure for future generations while opening up significant tourism and economic development opportunities.”

Says Posner: “Aug. 13, 2020, will be the 60th anniversary of the East Broad Top’s first reopening, which took place during the bicentennial of the founding of what became the ‘twin boroughs’ of Orbisonia and Rockhill Furnace. This was an era of revised expectations in the face of the decline of the railroad industry nationwide. At that time Nick Kovalchick could not have imagined the possibility of reopening the entire line, but fortunately our industry’s renaissance has helped create an environment in which this important and audacious project can succeed. We are honored to follow in the footsteps of two generations of the family that has made this all possible.”

“This will be a monumental undertaking,” says Esposito, “and I encourage anyone interested in helping us to join the Friends of the East Broad Top and come work on buildings, track and equipment.”

The railroad’s new website can be found at eastbroadtop.com. 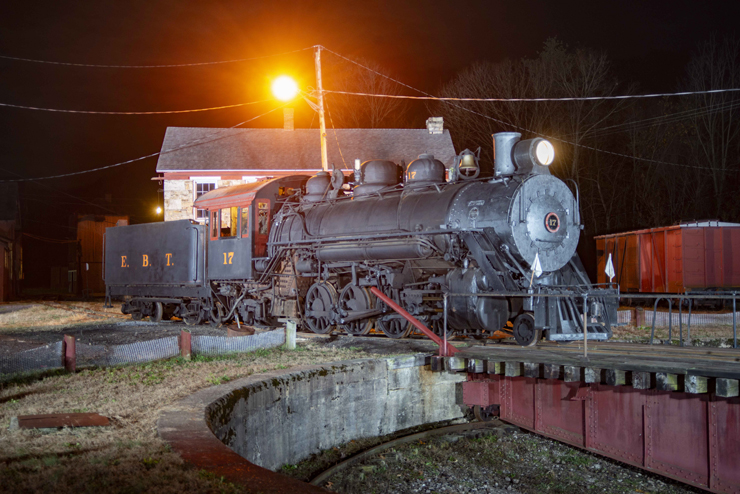 East Broad Top locomotive No. 17 rides the turntable at Rockhill Furnace during a November 2019 photo day. Similar events are possible this year as the EBT aims to return to service in 2021.
Dan Cupper

25 thoughts on “‘The East Broad Top will run again and again.’ NEWSWIRE”