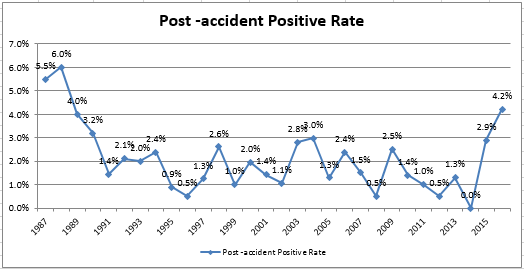 Federal Railroad Administration
WASHINGTON — More than 4 percent of railroad employees involved in accidents in 2016 tested positive for drug use. Trains News Wire sought the information from the Federal Railroad Administration after the National Transportation Safety Board revealed that three Amtrak employees involved in a fatal crash on the Northeast Corridor in April 2016 tested positive for drugs following the incident.

While the NTSB concluded that drugs did not contribute to the fatal accident near Chester, Pa., that left two track workers dead, it reflects a troubling trend of drug use within the rail industry.

Overall, the number of railroaders — including engineers, train crew, and dispatchers — who tested positive for drugs during random tests increased by 19 percent from 2014 and 2015, according to the FRA.

The numbers, specifically those of post-accident positive rates, are on-par with what was found in the late 1980s when the FRA led a crackdown on drugs within the rail industry following another fatal Northeast Corridor collision. On Jan. 4, 1987, Amtrak’s Colonial collided with a set of Conrail locomotives near Chase, Md. Sixteen people, including 14 passengers and two Amtrak employees, were killed. It was later discovered that the crew aboard Conrail locomotives had been under the influence of marijuana and had failed to stop at a red signal.

At the time, 5.5 percent of railroad employees involved in an accident tested positive for drugs. In 1988, that rate increased to 6 percent. But since then there has been a steady decline, usually between 1 and 2.5 percent annually, but that began to rise in 2015.

FRA officials say they are taking the issue seriously. In May 2016, a month after the fatal Northeast Corridor wreck, the agency issued a new rule that expanded the scope of all drug and alcohol regulations to maintenance of employees.

“The FRA has been publicly sounding the alarm and taking proactive steps within our authority on this growing concern for some time,” FRA representative Tiffany Lindemann tells Trains News Wire. “We continue to urge all railroads to be vigilant in their substance testing and do all they can to ensure employees are not operating or working under the influence.”

In September 2016, then-FRA Administrator Sarah Feinberg spoke at the Railroad Safety Advisory Committee meeting and expressed her concern to both railroads and labor groups about the increase in drug use.

During the remarks, Feinberg said the increase in drug use among railroaders was unsurprising when put in the context of national drug use. She praised the industry for its self-imposed high standards of drug testing but also encouraged railroads to help employees struggling with addiction.

“FRA’s position about substance abuse among rail employees and workers is very clear: the FRA will have no patience whatsoever for post-accident positive test results–railroads, and railroad employees, have the safety of the public in their hands,” Feinberg said.

The trucking industry has seen similar drug-use rates in recent years. According to the Federal Motor Carrier Safety Administration, 5 percent of freight truck drivers involved in fatal crashes in 2014 tested positive for drugs.

In a statement to Trains News Wire, the Association of American Railroads notes that drug use is problem, although adds that all modes of transportation have seen an increase of drug use in recent years and that it reflects trends within the general population. AAR also supports any effort by the FRA to strengthen drug testing regulations and to have it include more drugs, such as opioids.

Trains News Wire reached out to the Brotherhood of Locomotive Engineers and Trainmen but they declined to comment for this story.