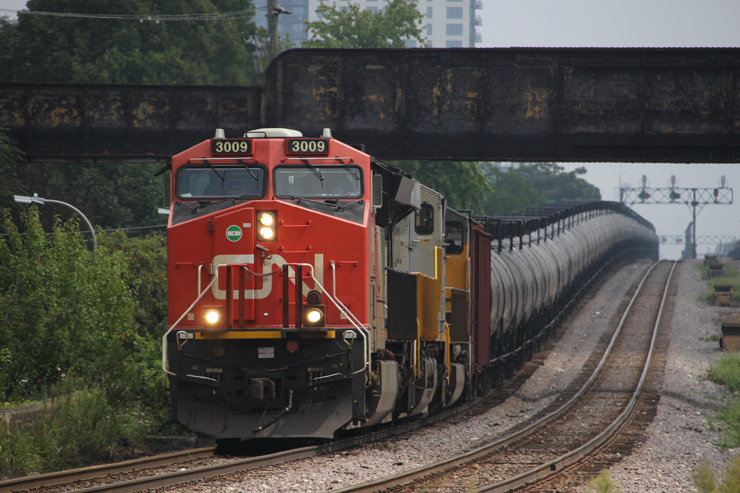 Canadian National power leads a westbound empty oil unit train through River Forest, Ill., on the Union Pacific on Aug. 25, 2018. CN is seeing increased crude-by-rail business.
TRAINS: David Lassen
TORONTO — Shipments of Canadian crude oil to the U.S. — already moving at record levels — are likely to increase further in the spring and could top the peak reached in 2014.

With pipeline capacity maxed out, demand is already there to ship crude from Western Canada to refineries in the United States.

But Canadian National and Canadian Pacific want to ensure that they can handle the Canadian grain harvest during the challenging winter months before bringing on more crude-oil traffic, rail executives told an investor conference on Tuesday.

Canadian grain producers have the ear of regulators in Ottawa and are long-term users of rail service. Neither CN nor CP want to give grain shippers a reason to complain if oil trains begin taking up capacity that otherwise could go to grain moves.

Since October, CN has been moving crude oil trains at an annual rate that would equal 130,000 carloads, which is just short of the 2014 peak of 140,000 carloads, says Paul Butcher, CN’s vice president of investor relations.

CN and CP have moved cautiously to sign contracts with Canadian oil producers.

To justify their investments in new locomotives and crews to handle unit oil trains, both railroads are insisting on long-term contracts that include volume guarantees.

Neither railroad approached the oil market this way during the last surge in traffic, which went bust in 2015 and left the railroads with more crews and locomotives than they needed.

As of last week for the quarter to date, petroleum products shipments — the category that includes crude oil — were up 34 percent on CN and 35 percent on CP, according to data reported to the Association of American Railroads.