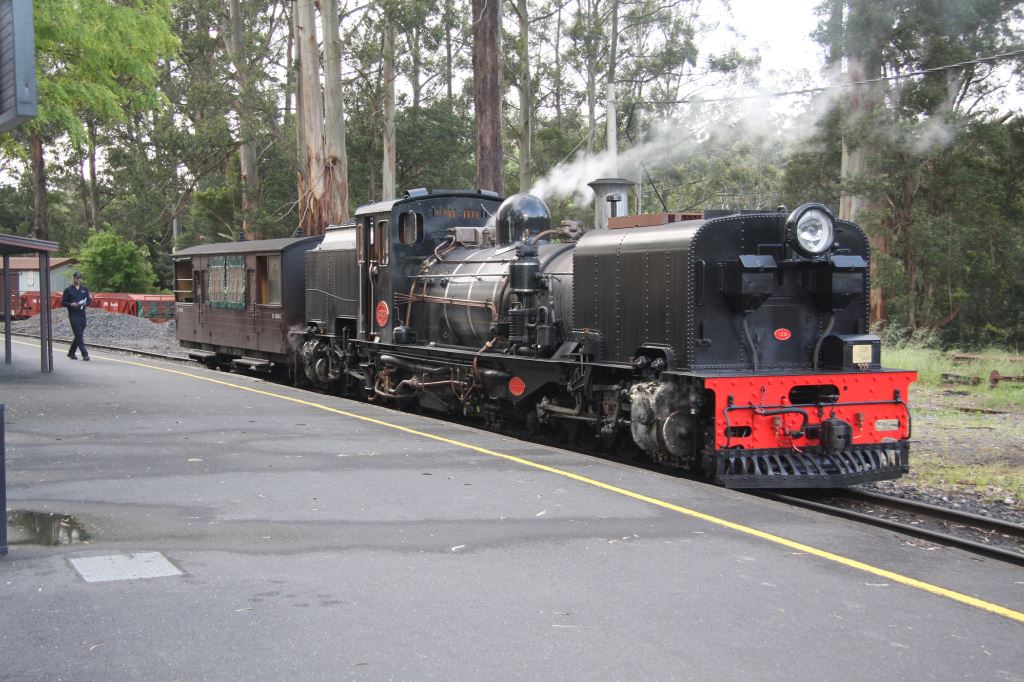 Putting this large (for narrow gauge) locomotive into service was a major accomplishment for the heritage railway’s shop crew. As built, No. 129 was a 2-foot gauge locomotive, and the Puffing Billy Railway is 30-inch gauge. While re-gauging steam locomotives to a smaller gauge has been done numerous times, going to a wider gauge is a major engineering undertaking.

The locomotive first arrived in Australia following its purchase in 1996, and it wasn’t until 2007 that the first engineering work and cost estimates were developed. Serious work did not begin until 2012. Among the challenges were manufacturing new frame stretchers, modifying the bearers for the boiler, adding an air brake system and building new water tanks and coal bunkers to fit the widened frame.

For the past few weeks, various tests were performed under steam, and finally, on a rainy and chilly evening, all was in readiness. No. 129 and a single coach departed Belgrave Nov. 11, making several stops along the way to check bearings and clearances.

For Peter Ralph, a long-time member and volunteer at the Puffing Billy Railway, it was a long wait. Ralph is the man who first proposed buying the locomotive, and, 23 years later, he was present to see it rumble across the famed curved trestle at Monbulk. “Doesn’t it look magnificent?” he exclaimed in a note to several friends.

Additional testing and final certification must take place before No. 129 can enter service. It will join several original Victorian Railways NA-class 2-6-2Ts, as well as an older Beyer-Garratt. It is expected that its greater tractive effort will reduce the need to doublehead the elderly 2-6-2Ts on a nearly daily basis, as the Puffing Billy Railway annually carries 500,000 passengers on its 15-mile line.