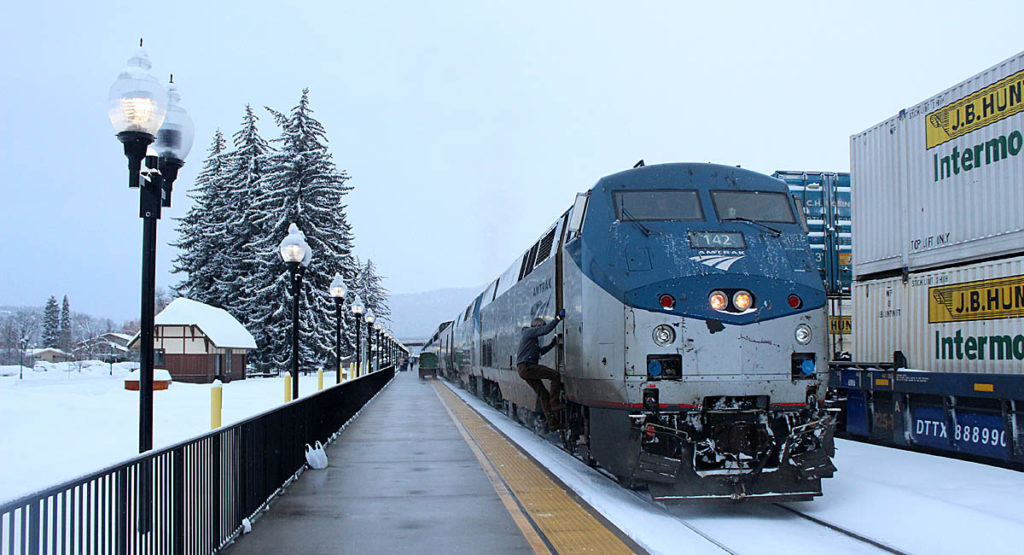 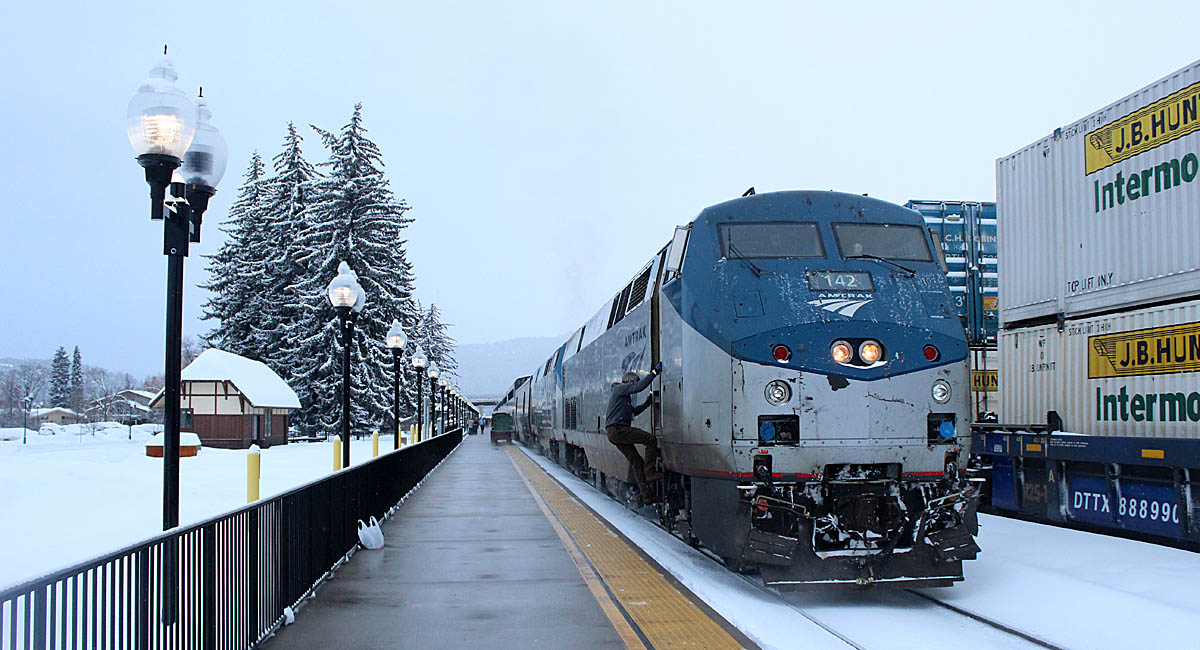 The ‘Empire Builder’ engine crew changes at Whitefish, Mont., on Feb 4, 2017.
Bob Johnston
ST. PAUL, Minn. – Winter storm Xanto, which is threatening travelers with blizzard conditions from the Dakotas through Minnesota and Wisconsin on April 13, and 14, is the type of weather system that the Empire Builder typically slogs through between November and March in providing daily mobility to passengers at 42 intermediate stops from Chicago to Seattle and Portland, Ore.

Nevertheless, Amtrak operating division managers in collaboration with the company’s Consolidated National Operations Center in Wilmington, Del., decided on April 11 to cancel trains leaving the West Coast on April 12 and 13 and Chicago on April 13 and 14.

Spokesman Marc Magliari tells Trains News Wire that the company is “exercising an abundance of caution because our mission is to safely carry customers to their destinations.” He also points out that severe weather conditions often result in crews and booked travelers not being able to get to stations.

However, BNSF Railway spokeswoman Amy McBeth says, “Amtrak made its own determination about its schedule; we were fully prepared for them to operate on us.”

In an email to Trains News Wire she adds, “It is business as usual…we have been planning and preparing by briefing with teams on safety and possible weather, arranging for a command center if needed, and readying equipment and resources, such as switch heaters and blowers.”

BNSF handles the Builder west of the Twin Cities, where 7-12 inches of snow are now predicted to accumulate through Sunday morning, but tracks in Minnesota are the only parts of that host railroad’s route affected. Wisconsin also expects to see April snows from Xanto, although Canadian Pacific spokesman Andy Cummings is unable to immediately ascertain whether special operating plans will be implemented on the railroad’s St. Paul-Chicago Empire Builder segment.

Cancelling the train for two days necessarily disrupts crew turns by stranding personnel away from home and adding expense not offset by ticket revenue. It also inconveniences travelers who thought they had booked “all-weather” transportation.

Other than a concern for passenger safety, contributing to the cancellation decision is likely a management structure that for the first time in decades fails to make any manager responsible for balancing a route’s revenue and growth potential against adverse affects of inconveniencing travelers, while many departments are charged with cutting costs.