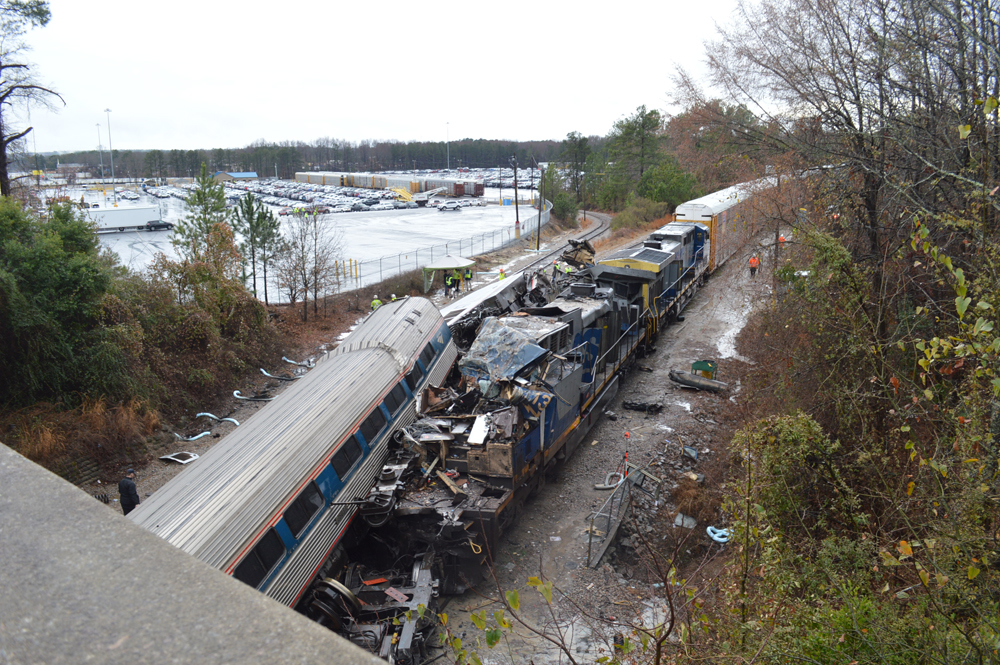 The remains of the lead locomotive of Amtrak’s Silver Star after it crashed into a CSX Transportation freight train on Feb. 4, 2018.
Jonathan Hinely
When a misaligned switch sent Amtrak’s Silver Star barreling into a parked CSX Transportation train in South Carolina last week, killing two Amtrak crewmen and injuring more than 100 passengers, it was a tragic example of rising accident rates at the freight railroad.

CSX’s train accident and personal injury rates both rose last year, by 12 percent and 13 percent, respectively, amid the broad operational and management changes made by then-CEO E. Hunter Harrison.

The Federal Railroad Administration is becoming increasingly concerned with safety trends at CSX, according to people familiar with the matter.

The FRA believes the rapid pace of change at CSX over the past year — in the executive suite, to front-line operating personnel, and to operating rules — has increased the risk of accidents and injuries at the railroad, the sources said.

The entire railroad is under tremendous pressure to deliver on promises made to shareholders and shippers regarding improved financial and operational performance under Precision Scheduled Railroading.

“And that pressure does not just exist at the board level,” according to a safety expert. “It goes all the way down to the guy that is responsible for operating the locomotive or doing the inspections.”

The FRA is concerned about operating rule changes designed to improve terminal productivity, such as raising restricted speed in yards to 20 mph from 15 mph and allowing crews to get on and off moving equipment.

The FRA has received complaints from employees who say they don’t have enough time to properly inspect trains. And agency officials are concerned about the quality of inspections, which take longer when FRA inspectors are on site than when they are not, according to people familiar with the matter.

The elimination of road foremen of engine positions, and assigning their duties to trainmasters, has reduced the effectiveness of the supervision of engineers and conductors, according to people familiar with the matter.

Also a concern for federal safety officials: The ability of engineers to properly handle long trains, which CSX operates with distributed power less frequently than other railroads, the sources say.

CSX management has been “resistant” to some of the concerns the FRA has raised, according to people with knowledge of the situation. They noted, however, that it is not unusual for railroads to push back against the FRA.

“As part of our regular, ongoing coordination with regulators, CSX maintains an open line of communication with the Federal Railroad Administration to discuss any concerns or questions they may have, and we work to provide the FRA with information they request in a timely manner,” the railroad said in a statement. “Safety remains CSX’s top priority as we focus our efforts on executing the scheduled railroading strategy, which we firmly believe will result in a safer and more efficient railroad. Our goal is to become the best railroad in North America. We cannot be the best unless we are the safest, and we are relentlessly working toward that objective.” 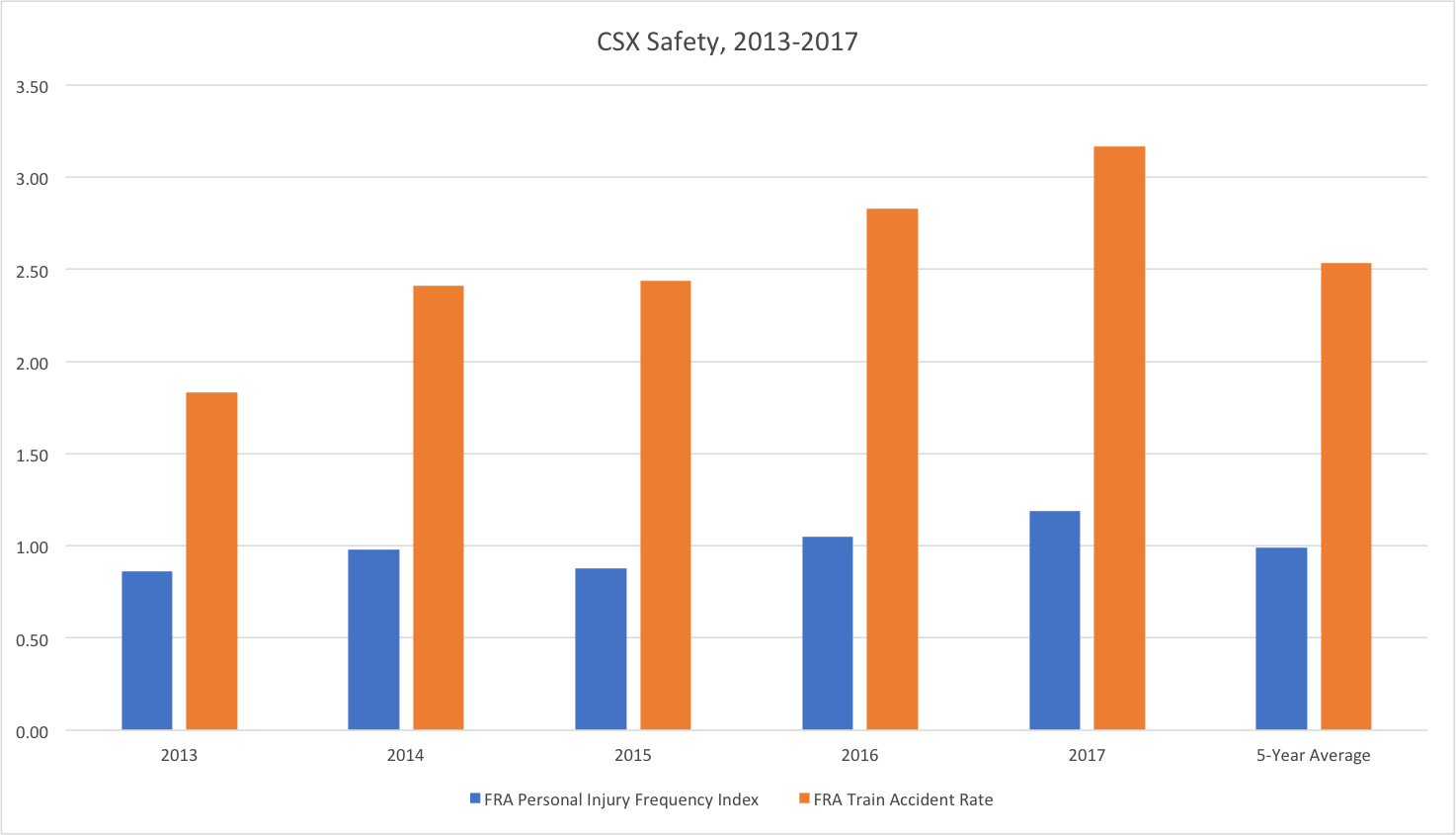 CSX personal injury and train accident rates, 2013 to 2017
Bill Stephens, TRAINS
In its annual report, CSX says it strives for continuous improvement in safety through training, innovation, and investment in technology that can help prevent accidents caused by human error.

But the spike in CSX’s accident and injury rates in 2017 was part of a longer trend.

CSX’s train accident rate increased 73 percent from 2013 through 2017, while the employee personal injury frequency rate rose 38 percent over the same five-year period, according to a review of the safety figures the railroad reports quarterly alongside its financial results.

CSX’s train accident rate — the lowest among the Class I railroads in 2013 — was the highest among the big six systems through the first 11 months of 2017, according to the latest FRA data available. It now stands at about the level it was a decade ago.

The vast majority of CSX’s train accidents, as holds true for the industry as a whole, occurred at low speed in yards and did not involve injuries or significant damage, the FRA data show.

But high-profile wrecks — such as the Silver Star collision and the derailment of a long train that forced the evacuation of 900 residents of Hyndman, Pa., in August — often indicate deeper safety problems, railroad safety experts say.

Former CEO Michael Ward laid off nearly 1,000 management employees in February. Harrison became CEO in March and launched sweeping operational changes that in the summer led to service problems, shipper complaints, and increased scrutiny from federal regulators. In October, the departure of three top executives was announced amid the hiring of Jim Foote as chief operating officer. Harrison died in December and Foote was named to succeed him. In January, Ed Harris, who worked alongside Harrison at Illinois Central and Canadian National, was named chief operating officer. 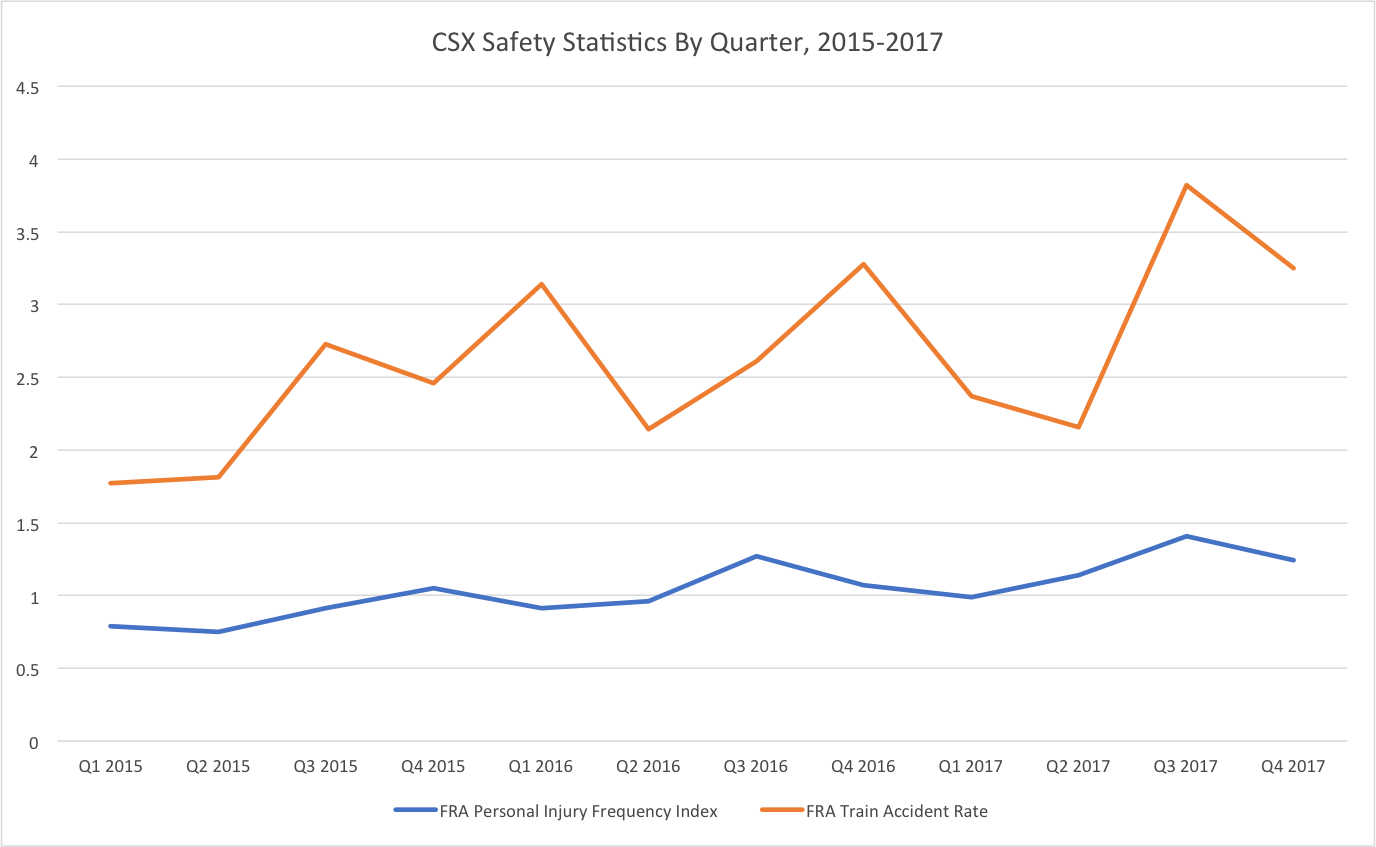 CSX quarterly safety statistics, 2015-2017
Bill Stephens, TRAINS
“How do you maintain a safety culture when you are making some really radical changes to the operation in a short amount of time,” asks Allan Rutter, a former FRA administrator who now is division head of freight and investment analysis at the Texas A&M Transportation Institute in Dallas.

Another former FRA administrator, and former Amtrak CEO, Joseph Boardman, said it’s dangerous for any railroad to undergo as much change as CSX has in such a short period of time.

“Safety culture is a very difficult thing,” Boardman says. “You have to be consistent, you have to keep moving forward.”

Boardman wondered if cost-cutting at CSX has played a role in the uptick in the accident and injury rates.

It appears likely that CSX workers didn’t follow rules and procedures to ensure that the switch was properly lined before the Silver Star wreck, Ditmeyer says.

“I view it as a legacy of Hunter Harrison,” he says.

Harrison made similar operational and management changes while leading Canadian Pacific from 2012 to 2016. Yet during that period, CP maintained an industry-best train accident rate, while personal injuries rose slightly, by 6 percent, but remained at the low end of the Class I systems.

The difference at CSX?

“Harrison was trying to do a much more rapid change on a much more complex network,” Ditmeyer says.

Meanwhile, the lack of a permanent FRA administrator hamstrings the agency because it creates a leadership vacuum, safety experts say.

The confirmation of Ron Batory, a respected rail industry veteran, as FRA administrator remains tied up in the U.S. Senate. After the Trump administration said it would abandon a deal for partial federal funding of new Northeast Corridor rail tunnels linking New Jersey communities and New York Penn Station, senators from New York and New Jersey have held up a vote on the matter.