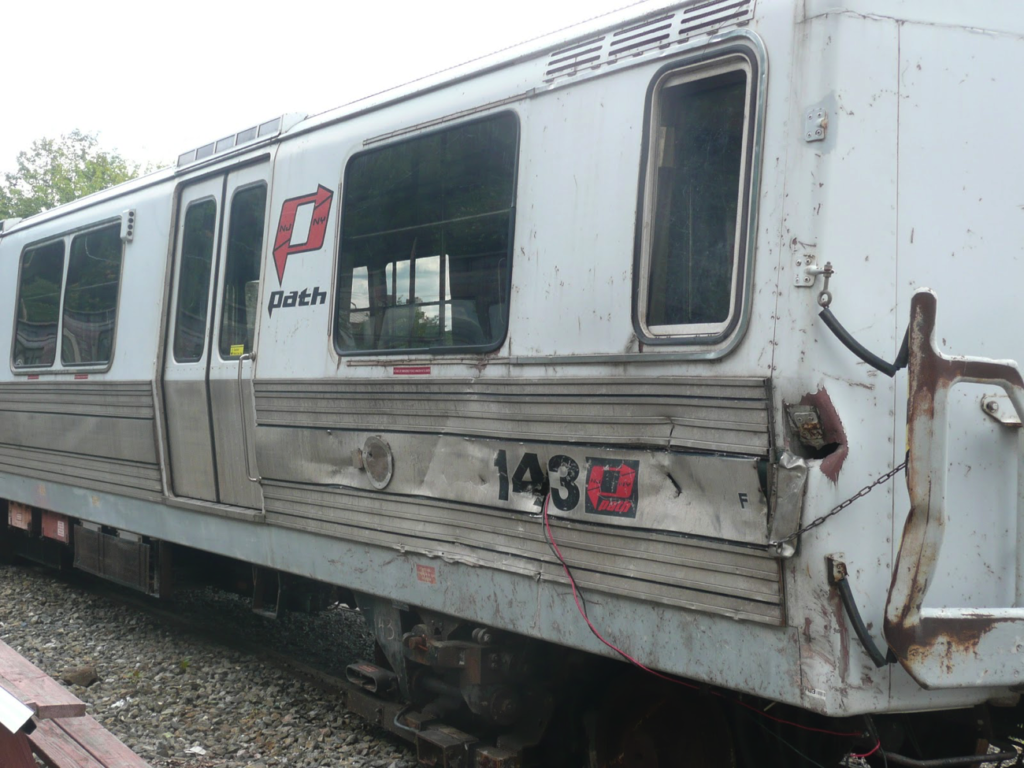 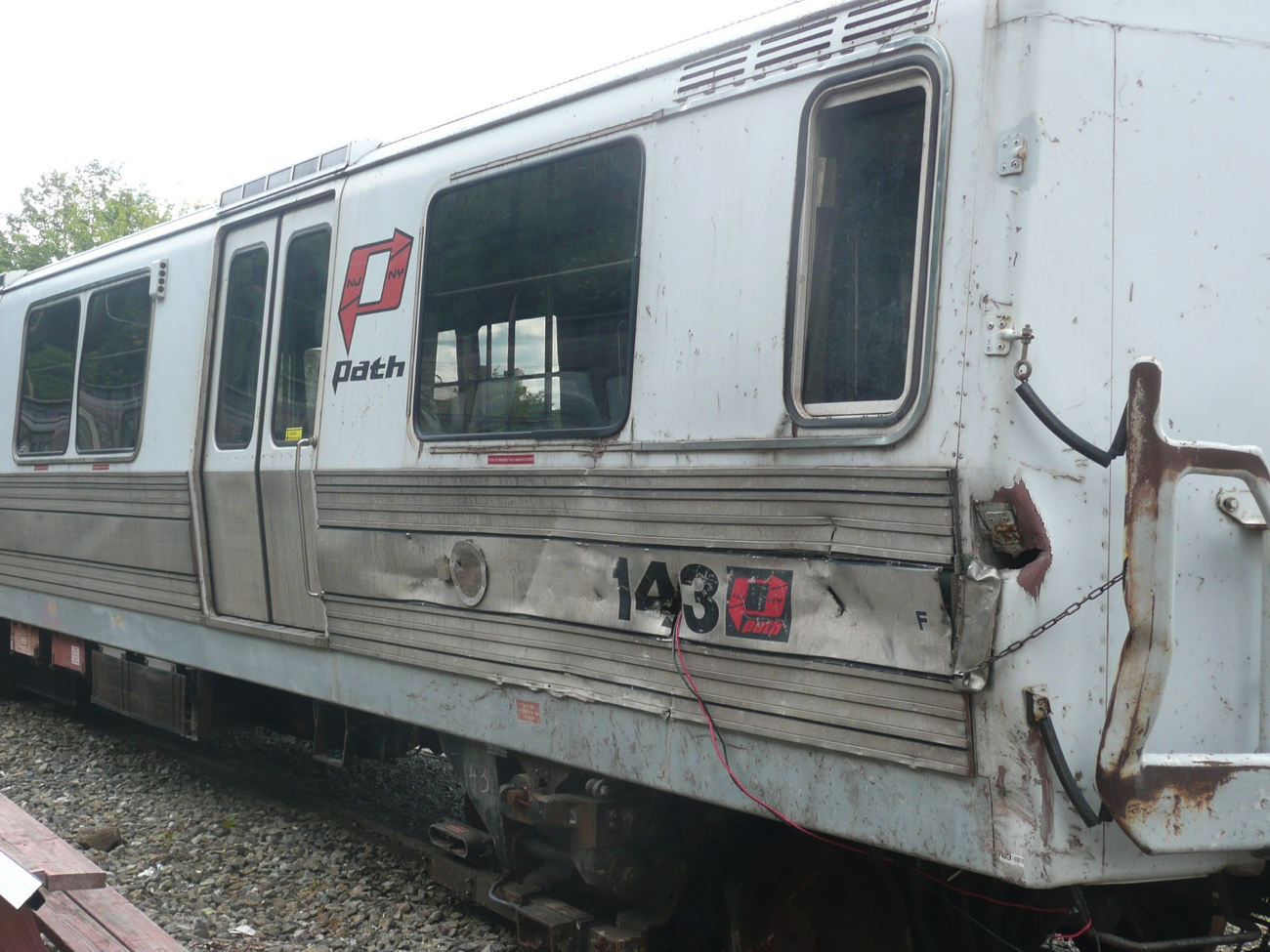 PATH Car No. 143: A survivor of the terrorist attacks on the World Trade Center in New York on Sept. 11, 2001.
Ralph Spielman 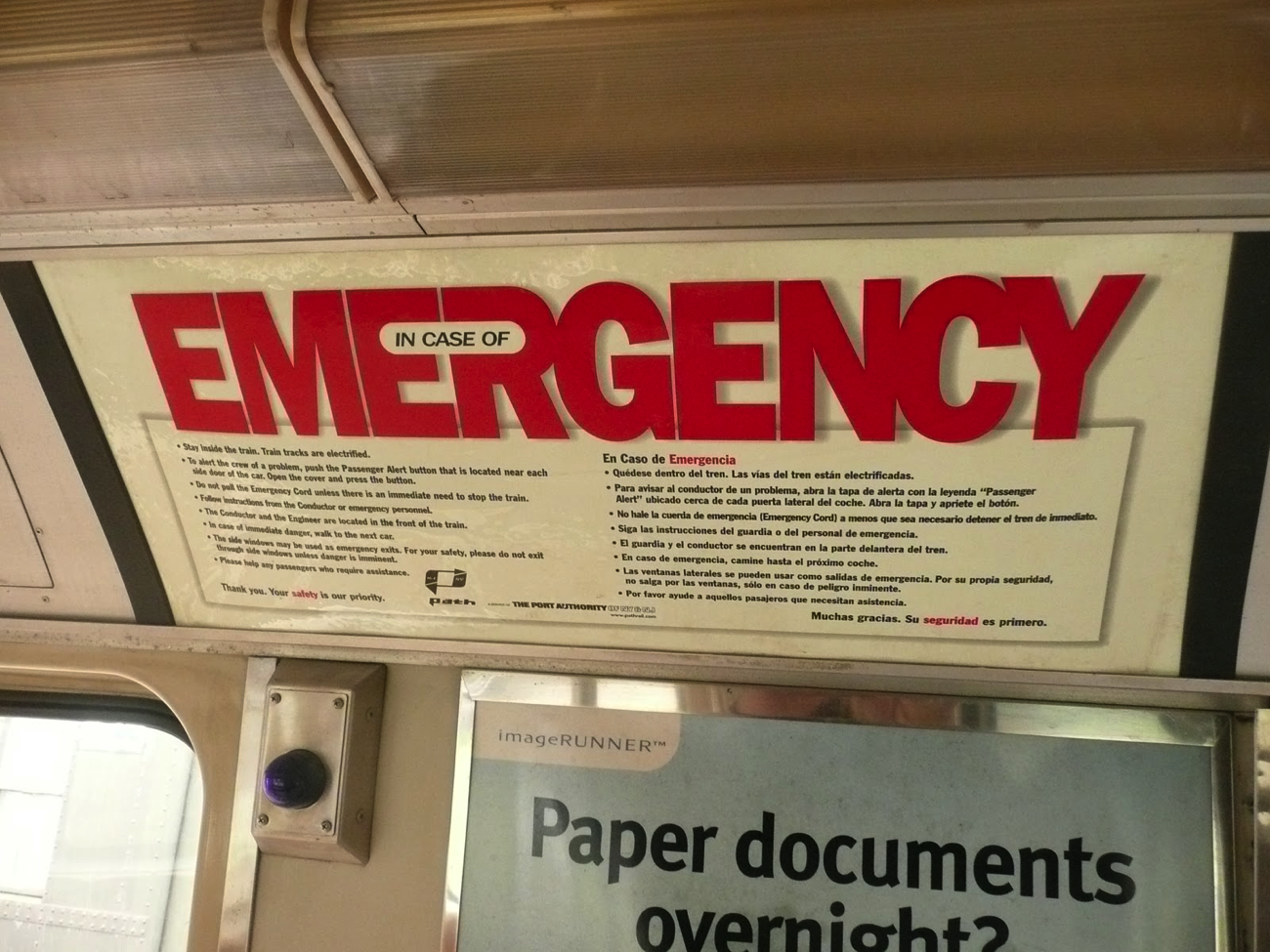 An emergency sign inside Car No. 143. Planners could not have envisioned the emergency passengers in this car might have had to endure. Fortunately, the train this car was in was ordered stopped. No passengers were on board at the time it was buried in rubble.
Ralph Spielman
NEW YORK — Looking at it, PATH Car No. 143 seems a little beat up. Chances are good that you’ve seen railroad equipment that’s been in a wreck.

Maybe this Port Authority Trans Hudson PA-1 car was sideswiped by an errant freight car load on the stretch in New Jersey between Jersey City and Harrison.

At 8:46 a.m., Sept. 11, 2001, the North Tower of the World Trade Center was the target of a hijacked American Airlines flight No. 11 passenger jet that flew right into the middle of it. Seventeen minutes later, United Airlines No. 175 flew into the South Tower.

And No. 143? When the towers collapsed, there was one train left in the station — a Hoboken bound train — after managers decided to keep it there and not run it, given the danger posed by the burning, collapsing towers above.

In the days that followed the attacks, recovery workers digging through World Trade Center wreckage reached the train and found that three cars survived. Car No. 143 was one saved by the Port Authority of New York and New Jersey and kept in a hangar at JFK Airport for future display. It is now on display at the Trolley Museum of New York in Kingston, N.Y., north of New York City. On days the museum is open, you can walk through the car, sit in one of the seats, and imagine being a passenger on that horrific day. While the world around downtown New York City was literally caving in, no passenger on a PATH train lost their life, thanks to incredible luck and split decisions by PATH managers.

But the transportation abnormalities of that day were not limited to the PATH. The New York City Transit Authority subways shut down at 10:20 a.m.; Amtrak halted trains earlier at 9:17 a.m.; and NJ Transit stopped trains into Penn Station at 10:30 a.m. Metro-North and the Long Island Rail Road continued to operate into the afternoon.

And today, if you want to catch a New York City Subway No. 1 train from Cortland Street to South Ferry in Manhattan, 241st Street in the Bronx, or any station on that line from there, it cannot be done. That station has yet to re-open since it was destroyed by falling debris 16 years ago.

Still, those privileged enough to visit Car 143 can sit in the car’s seats with upholstery, advertising, and paint frozen in time, and let memories wash over them. Add three more recollections: two from passengers and one from an engineer who were witnesses to how the attacks affected commuter railroads and commuters that day.

“September 11, 2001, started out as a normal workday. I drove to the LIRR station for an 8-something train to New York City. The car radio was on when I heard a plane went into WTC. I got to the station and while waiting on the platform, was on the phone with a colleague. We thought a small plane lost its way and crashed into the building. The train arrived and I took my seat; there was chatter about the plane.

“On our way to New York City we stopped a bit outside of the tunnel into Penn Station. At that point, someone yelled out that another plane went into the World Trade Center. We finally realized the first accident wasn’t a small plane. Cell phones were [ringing] but my service stopped when the same coworker I was speaking with earlier called and I heard him say, ‘Get home ASAP.’ Then my phone died.

“We sat on the train not moving at all and saw smoke in the sky. I was on the left side of the train, which faced towards a southern Manhattan. People were asking if anyone’s phones were working. A majority of us had no service but one or two of the commuters did. They kept us updated saying “another one just crashed in Washington and then another somewhere in what we thought at that time was New Jersey.

“Tension was high because no one knew what was going on. The smoke was heavy in the sky but you could see the top of Tower 2 of the World Trade Center. All of a sudden you could not see the top of the building anymore. We finally arrived in Penn to chaos and truly not knowing what happened. People were pouring out of the subways heading onto the trains describing what they had seen or heard.

“I got a seat on a Babylon (N.Y.) train and a young man in a panic sat down next to me. He told me he had been late for work, got in the subway heading to World Trade Center when police at a station long before Fulton Street told him to go back to Penn. He was desperately trying to reach his coworkers on his phone and, of course, there was no service.

“The train doors closed and we were sitting in the tunnel for what seemed like days but was probably an hour. There were white knuckles all around and all we wanted was to get out of the dark tunnel. We finally pulled outside the tunnel, stopped, moved a bit, stopped, moved a bit, but you could see the black sky and smoke where the towers once stood. I was lucky, because the train I was on was stopping at my station. I asked the fellow sitting next to me where he lived and that I would drive him home as he was in no condition to drive. He said his stop was the one before mine and he needed to walk. So he did.

“I arrived at my station, got into my car, turned on the radio and finally heard what had happened in full. It was about 2 in the afternoon and I was never so glad to get home after spending six hours on the Long Island Rail Road. I heard later that day I had been in one of the last trains out of New York.”

“I left work near Radio City in the late afternoon, walking over to [Grand Central] after 4 p.m., hoping to find a train. I met my friend Sam there, who had dust on his shoes and had walked all the way up from Morgan Stanley in the World Trade Center area (almost 4 miles). For years, whenever I saw Sam, I immediately thought about those shoes.

“We had one of the last trains out. It was absolutely quiet on that train. We were all headed home, but we were all in a foreign place where we’d never been before, and, although we did not know it at the time, we could never return from where we had come.”

“I was working my regular passenger assignment out of Hoboken Terminal for NJ Transit Rail Operations and had just returned from my first round trip, a Summit, N.J., local. I was upstairs in the engineer’s lounge, which was at that time, situated out between two of the old ferry slips with an unobstructed view of Manhattan and the Twin Towers. I was in the rear room by the window when the janitor came in and asked all of us to move to the middle room so he could mop the floor. We heard a loud explosion and rushed to the window whereupon we saw a huge hole in the side of one of the towers that had the distinct outline of a large aircraft.

“Almost immediately, flames and thick, black smoke erupted from it. Several of the other engineers rushed to their lockers to get binoculars and telescopes. Minutes later, one of them spotted the second jet approaching and we all watched in disbelief as it crashed into the second tower. Some one shouted, ‘We’re under attack!’

“Everyone stood in total shock at what we all had just witnessed. It seemed surreal. We could not believe what we had just seen.

“Within minutes, the company phone began ringing, summoning crews, including mine, to the control center. Due to depart for Gladstone (N.J.), we had no idea what was about to unfold. I came downstairs to the concourse at Hoboken Terminal to a chaotic scene. By now authorities had ordered all travel to New York halted. Passengers were being told to catch trains back to outlying stations and go home any way they could.

“My crew and I were instructed to depart on time and head to Gladstone, as scheduled. Our four-car Arrow II MU train was packed to the walls. Every inch of space was taken and some people were turned away. We left slightly ahead of schedule with orders to make all local stops discharging only. About halfway to Summit, we were instructed by the Morristown Line Dispatcher to discharge all remaining passengers at Summit and yard our consist to await further instructions. We sat for what seemed like hours totally in the dark as to what was unfolding as no one had cell phones back then.

“The cab radio was flooded with a steady stream of transmissions to other trains ordering them to do thus and so. After several radio exchanges, we were told to back into the station, pick up several other crews, and run Extra to Hoboken (N.J.) nonstop, but not allow any passengers to board.

“As we exited the Bergen Tunnels into Hoboken, I could see only thick smoke in the area of the towers. Suddenly, the wind shifted and I could not believe my eyes. ‘The towers were gone!’ I shouted back into the passenger compartment to my crew and the others. ‘They’re gone! The towers are gone!’

“My conductor jumped into the cab and stared in disbelief. Upon arriving in the terminal, we were confronted with total confusion and panic. People were running everywhere trying to get out of there any way they could. Somebody from management told us to leave immediately for home and stay in contact for further instructions. Just then somebody shouted that there was a bomb in the building.

“Total chaos set in with frightened passengers, crew members, and others attempting to flee the building and grounds. I grabbed my bag and sprinted to my car on the employee parking deck only to find the gate padlocked. One of the bosses got a bolt cutter from the engine house and cut the lock so we could all get out. I cut through side streets via a route I knew which avoided most of the main streets skirting traffic jams and made it safely home.

“The days and weeks that followed were anything but normal. Many familiar faces of riders I recall seeing daily were among the missing. Cars remained parked at stations for weeks.

“Their owners never caught that evening train back to drive home.”