Oil price war could also affect traffic, but CP says it is "fully protected" by contracts 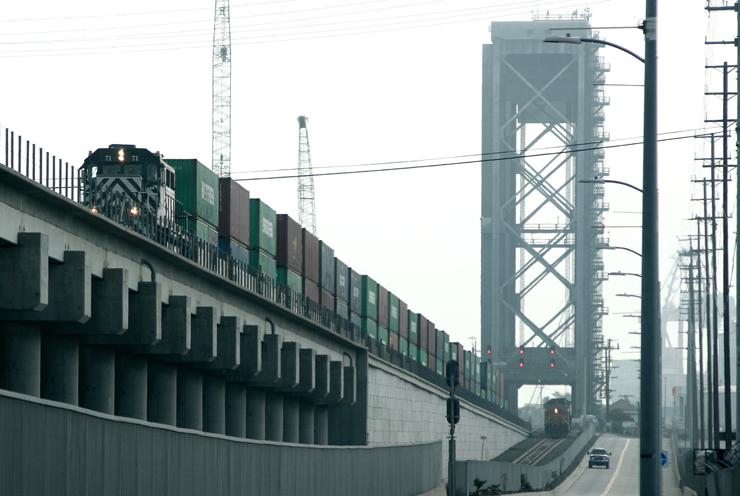 A Pacific Harbor Line train works at the Port of Los Angeles in January 2018. Traffic at the port was down significantly in February, and railroad officials anticipate a significant decrease in international intermodal traffic, because of the coronavirus.
TRAINS: David Lassen

NEW YORK – The full impact of the global coronavirus epidemic will soon be felt on North American railroads due to the lull in Chinese manufacturing and exports that feed intermodal volume, rail executives said this week.

Container volumes have already begun to sink at North American ports. At the Port of Los Angeles, for example, February container volume fell nearly 23%, the port announced on Tuesday.

“We’ve not seen the impact yet from the extended Chinese New Year volumes. But we expect to see this show up in our intermodal volumes over the coming weeks,” CSX Transportation CEO Jim Foote told an investor conference on Wednesday morning.

Steamship companies serving China have cancelled scheduled sailings in recent weeks due to the coronavirus impact on manufacturing and transportation in China. But the shipping lines have an optimistic view that trade will quickly return to normal after quarantine-related shutdowns that extended the traditional Chinese New Year holiday period, Foote says.

CSX will be able to handle the anticipated surge in international intermodal traffic, whether it comes via interline service from West Coast ports or lands at East Coast ports the railroad serves, Foote says.

“We’ve got a great running railroad and capacity to handle traffic changes, whether it comes east or west,” he says.

International intermodal volumes will see the largest impact from the coronavirus in the near term in Canada, as well, Canadian Pacific Chief Financial Officer Nadeem Velani told investors and analysts on Tuesday. The railway expects international container volume to slump in the second half of March and into early April before rebounding.

CP sees a “quick recovery” as retailers and manufacturers restock their inventories, which have been depleted amid extended manufacturing shutdowns in China, where the virus first began to spread.

“We don’t see this as lost volumes,” Velani says.

The economic impact of the coronavirus shuddered global stock, bond, and commodity markets this week. And an oil price war between Saudi Arabia and Russia sent crude oil prices plunging.

That prompted a large Canadian oil producer, Cenovus, to announce that it would temporarily cease shipping crude by rail. It has contracts with both Canadian National and CP.

Both Canadian railways have contracts with minimum volume commitments, meaning oil producers will have to pay even if they don’t ship crude oil by rail.

“We are fully protected when it comes to crude by rail on the downside,” Velani says.

Even if CP didn’t haul another carload of crude after the first quarter ends, the impact would not be enough to make the railway change the low end of its earnings guidance for the year, he says.

“Crude by rail isn’t going to make or break our franchise,” he says.

Foote and Velani spoke at the J.P. Morgan Industrials Conference.

Executives from Canadian National, Norfolk Southern, and Union Pacific cancelled their scheduled appearances at the conference when it was switched to a virtual format amid the spread of the coronavirus.