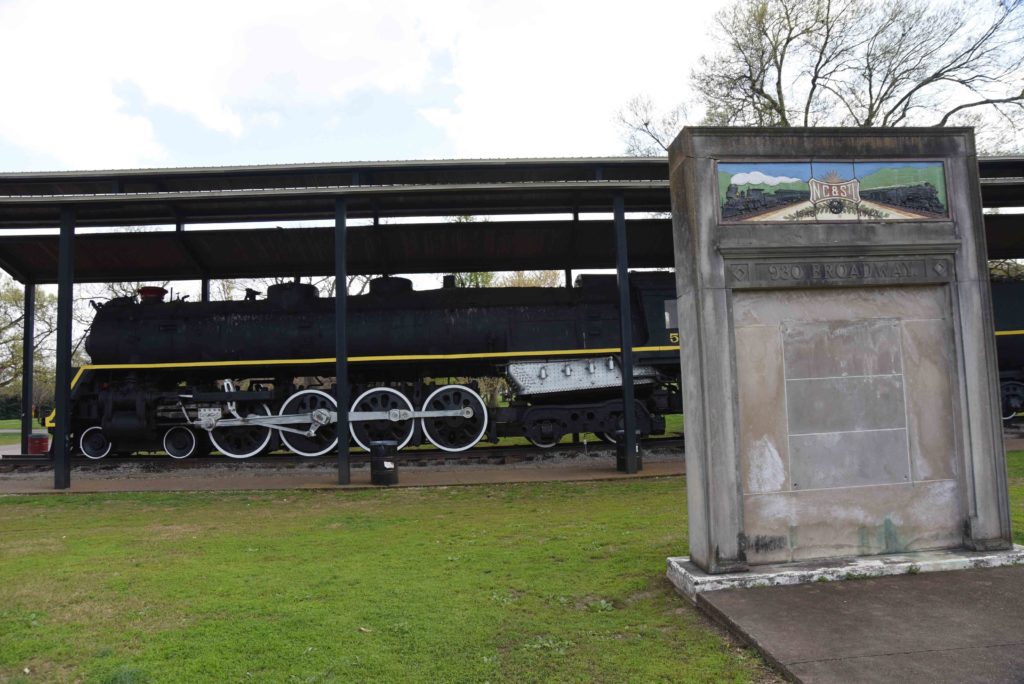 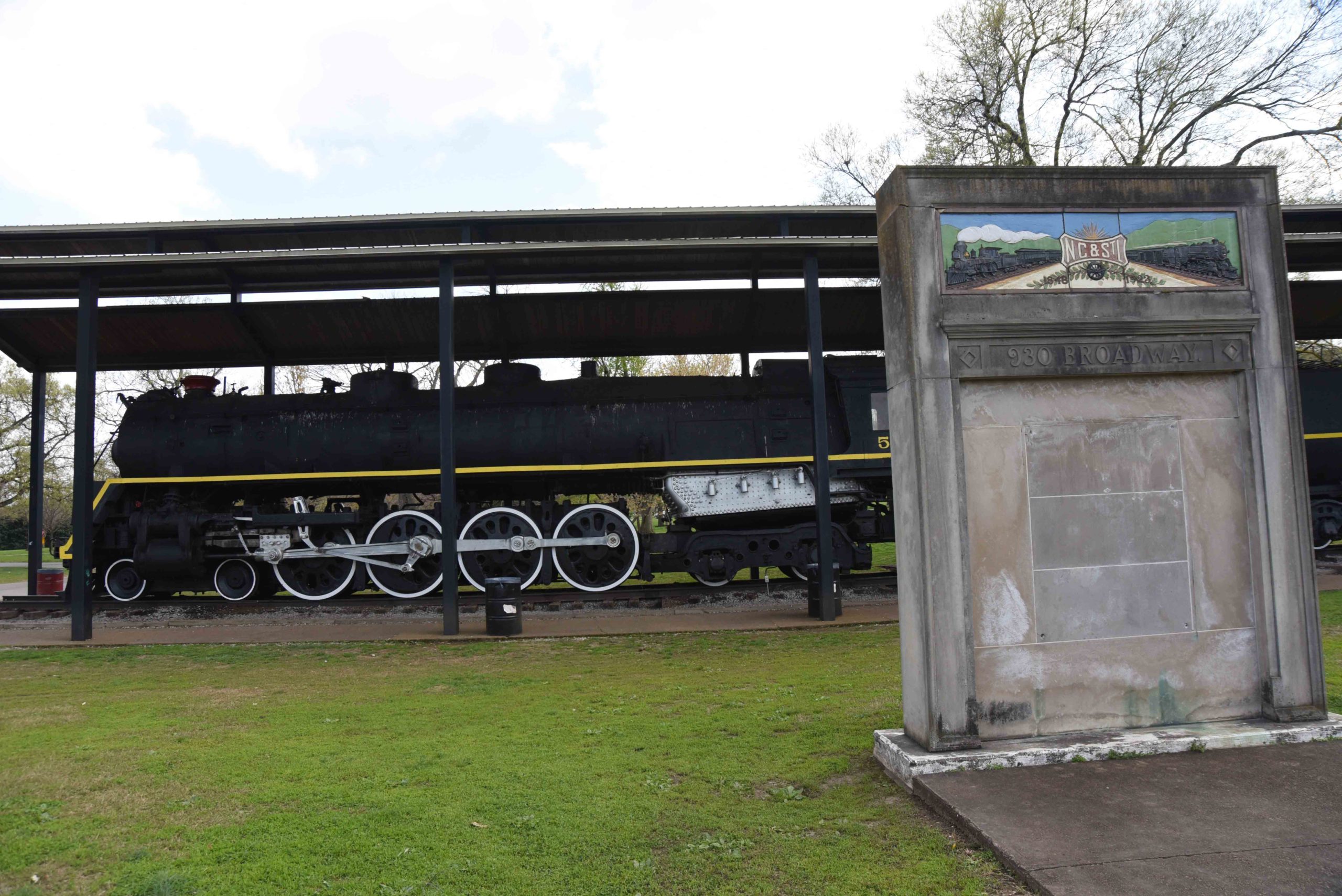 NC&St.L No. 576 is on the road to restoration in Nashville, Tenn.
Trains: Jim Wrinn
NASHVILLE — The Nashville Steam Preservation Society today announced that, thanks to the generosity of hundreds of donors from across the nation and globe, it has surpassed its initial fundraising goal of $500,000. Achieving this milestone enables NSPS to relocate the famous Nashville, Chattanooga & St. Louis Railway Steam Locomotive No. 576 from Nashville’s Centennial Park to a nearby shop facility for a complete restoration to operation. The highly anticipated relocation of the locomotive is planned for late 2018 or early 2019, once arrangements with the moving contractor have been finalized.

Known as the “Stripe,” No. 576 is the only remaining J3 Class 4-8-4 steam locomotive built for the NC&StL Railway. The locomotive was designed in the company’s office building on Broadway in the heart of Nashville and manufactured by the American Locomotive Company in 1942. The locomotive, long associated with Nashville’s Country Music roots, has been on display in Nashville’s Centennial Park since 1953. Fans of Johnny Cash will also recognize the locomotive from his 1969 Life Magazine Cover. “This is a true milestone for the history of No. 576,” said NSPS President Shane Meador. “We would like to thank everyone who has contributed thus far to get the project to this point. Through their generous contributions, No. 576 now has another lease on life.”

As part of a 2016 lease agreement with Metro Nashville, owner of No. 576, NSPS was required to raise $500,000 prior to relocating the historic locomotive to ensure sufficient funding was in place to safely relocate the locomotive. Now that this initial goal has been met, the locomotive will be moved from Centennial Park to live railroad tracks nearby. No. 576 will then be moved to the Tennessee Central Railway Museum approximately five miles away, where the restoration is planned to take place.

NSPS has held regular work sessions in Centennial Park since 2016 to inspect the locomotive and prepare it for relocation. Several components and appliances have been completely restored off-site and are ready for service. Each work session attracts hundreds of interested spectators curious about the locomotive and the work being done. In August, Nashville Steam volunteers successfully rolled the locomotive back about five feet. “Once the locomotive’s wheels broke free from the rusty rails, it rolled smoothly just like when it was first built 75 years ago,” said Meador.

Nationwide support for the Nashville landmark

Even though No. 576 is as much a part of Nashville as country music, NSPS has received donations from well beyond Music City. “So far we have received donations from 36 states and even a few from the United Kingdom. No. 576 may be in the heart of Nashville but its appeal has no bounds,” said Bill Webster, Treasurer for NSPS. “These early donations will translate into economic dollars as these fans of Nashville’s locomotive will travel here once No. 576 is operational.” Similar steam locomotive attractions in other cities have added millions of dollars to local tourism.

Nashville Steam launched a major campaign in March 2018 in order to raise the remaining funding needed to relocate the locomotive by the end of the year. In just six months, that effort alone raised more than $245,000. Contributing organizations include the Candelaria Fund, the Tom E. Dailey Foundation, Metro Parks Foundation, and numerous other private foundations, corporations, and individuals.

Nashville Steam is also planning a grand send-off party for the locomotive on Saturday, Oct. 27th they are calling the “No. 576 Revival Party.” The afternoon and evening event will celebrate the history of the locomotive in Centennial Park and give people a chance to envision its future. “If you grew up in Nashville, chances are you had your picture taken in front of No. 576 at some point in your life,” said Joey Bryan, Communications Manager for NSPS. “This will be the last opportunity for people to get a picture with the locomotive before we start final preparations for the relocation.”

The October event will simultaneously serve as the kickoff for the next round of fundraising. “Restoring a steam locomotive is an expensive endeavor,” said Bryan. “It takes a lot of work and money to make these industrial machines sing like they used to.” Musicians from all genres have looked to the steam locomotive for rhythmic inspiration in their song writing. “It only makes sense to have an operational steam locomotive right here in Music City.”

Nashville Steam anticipates an additional $2 million will need to be raised over the next three to four years to restore No. 576 to operation. “We are exploring several funding opportunities as well as grant programs to help offset the costs,” added Bryan. “It’s certainly a major undertaking but if there’s one thing I’ve learned over the past few months it’s that people want to hear and feel the song that only No. 576 can deliver.”

To learn more about the project or to donate to the restoration of No. 576, go to www.nashvillesteam.org.

Steam locomotive No. 576 was built for the Nashville, Chattanooga, & St. Louis Railway in 1942 by the American Locomotive Company. The locomotive arrived just in time for the war effort and hauled troop and supply trains throughout the southeast. No. 576 operated in revenue service for 10 years and was then donated to the people of Nashville. The locomotive was dedicated in Centennial Park on September 30, 1953 and has called the park home ever since.

The Nashville Steam Preservation Society formed in 2015 to preserve and celebrate the artifacts of Nashville’s rail heritage. NSPS secured an agreement with the City of Nashville in August 2016 to lease the locomotive with the intention to restore and operate the steam locomotive for special excursions out of downtown Nashville. NSPS is a 501(c)3 not-for-profit corporation.