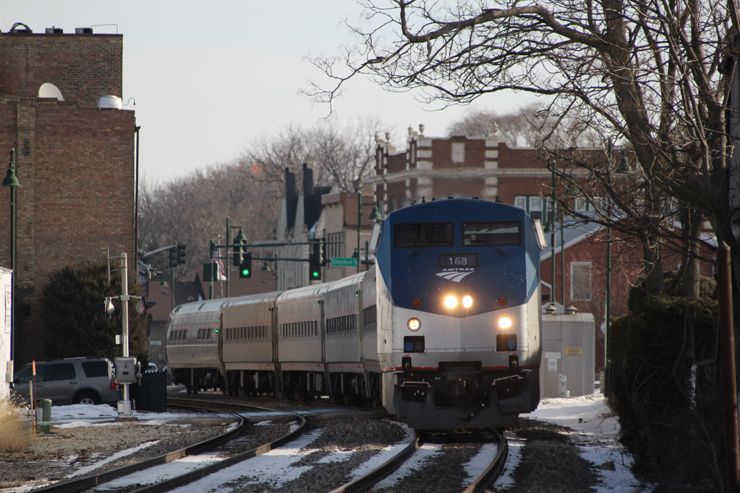 An Amtrak Lincoln Service train, led by P42 No. 168 and with an Amfleet car at the rear of the consist, passes through Lemont, Ill., on Jan. 20, 2018. Amtrak is hoping to order replacements for the P42s and Amfleet equipment this year.
TRAINS: David Lassen
Amtrak plans to seek proposals from manufacturers and award a contract by the end of 2018 for equipment to replace its current fleet of GE P42DC diesels and Amfleet cars, according to a statement by president and CEO Richard Anderson at an employee town hall meeting. His comment seems to indicate the passenger carrier would prefer integrated trainsets to the current fleet of cars and locomotives.

“These are two big programs for us,” Anderson is reported to have told employees. “We want to get a [Request for Proposals] completed and contracts awarded this year. There is no reason why we can’t.”

The passenger carrier will seek “more modern, lightweight, environmentally sensitive, [Americans with Disabilities Act]-compliant equipment that will give us a completely different product,” Anderson continued. He cited the DMU trainsets for commuter services in Fort Worth, Texas (to open in early 2019), and Santa Rosa-San Rafael, Calif. (which began service in mid-2017), as models for the “modern way of train travel.”

“If we want to appeal to a millennial generation in high-density urban markets, we need the same kind of modern unit trains we see operating in Europe and Asia,” he declared. “Making these investments now will benefit the next generation of Amtrak.”