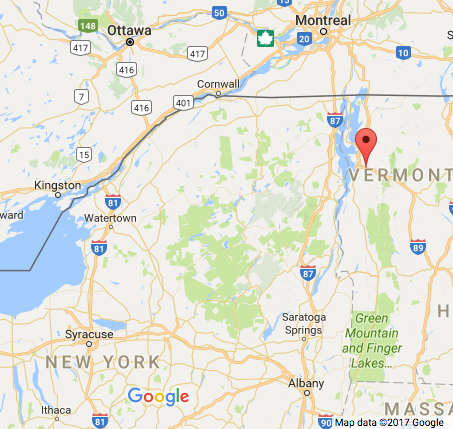 Williston, Vt.
Google Maps
WILLISTON, Vt. — In spite of a state report that downplayed the feasibility of commuter rail service in northern Vermont, a private company last week announced the purchase of 12 Budd Rail Diesel Cars with the intent to use them for commuter service between Montpelier, Burlington and St. Albans, Vt. AllEarth Renewables, a Williston-based manufacturer of solar panels and associated systems, formed an affiliate company, AllEarth Rail LLC, which bought the 1950s-built self-powered coaches from Dallas Area Rapid Transit. The RDCs were used in the Trinity Railway Express commuter service between Dallas and Fort Worth from 1996 to 2012 and were previously owned by VIA Rail Canada, which also bid to buy them back from DART but lost out to AllEarth.

The RDCs “are in great shape. They’re like brand new,” AllEarth Renewables CEO David Blittersdorf told VermontBiz. He expected delivery of the cars to Vermont by early July at the latest, and anticipated using them for a demonstration service this fall, but had no target date to start regular revenue service. DART says it decided to dispose of the RDCs due to the expense of finding parts for and otherwise maintaining the average 63-year-old cars.

In spite of the cost of more than $1 million per car to rehab the RDCs, Blittersdorf said these costs pale in comparison to the projected $301 million to $363 million in upfront costs the Vermont Agency of Transportation estimated a St. Albans-Burlington-Montpelier service would cost. State transportation officials anticipated needing to buy new trainsets (six cars and a locomotive) for $27 million each.

“Using the RDCs, we can cut the costs tremendously. You take $300 million, and if you can get it down to $50 million, that’s huge,” Blittersdorf said. Though AllEarth would be among the few completely privately owned and operated commuter rail service in the U.S., it would need state assistance.

AllEarth Rail has just begun negotiations with the two regional freight railroads that would host the service, the independent Vermont Rail System and the New England Central Railroad, a Genesee & Wyoming subsidiary. Blittersdorf said AllEarth Rail was looking to connect Essex Junction (6.1 miles east of Burlington, currently served by Amtrak) to Montpelier first. The service would use the existing Amtrak stations at Essex Junction and Waterbury and an under-construction transit center in downtown Montpelier, but new station platforms would be needed at Middlesex and Richmond.