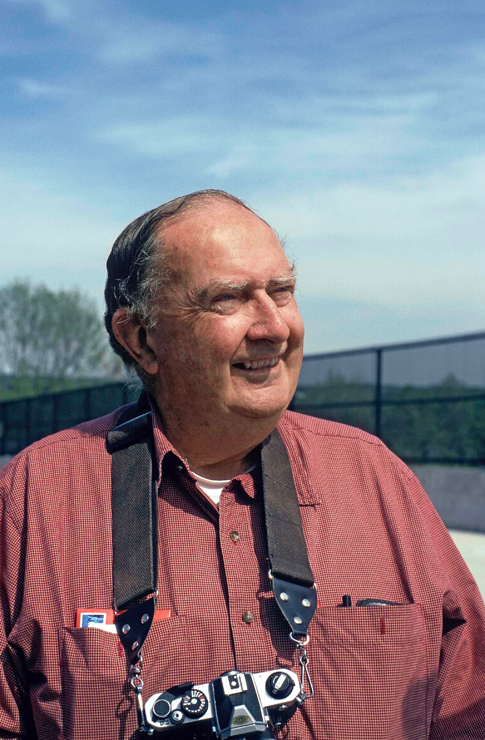 TROY, N.Y. – Of all the pioneers who revolutionized railroad photography in the postwar decades, few equal the status of Jim Shaughnessy, one of the deans of the field, especially as measured by his powerful images from the steam-to-diesel era of the 1950s and ’60s.

Shaughnessy died Tuesday, Aug. 7, after a long illness. He was 84.

Generally considered part of railroad photography’s “big three” – the others being Philip R. Hastings and Richard Steinheimer – Shaughnessy was a fearless artist who got in and around railroading as few others did. He was an important figure in the shift away from simple train pictures toward depictions of the entire railroad environment.

“Jim sought to contextualize the engines and trains he loved into a broader framework that spoke less about hardware and more about their role in everyday life,” says author and photographer Jeff Brouws, who wrote a lengthy profile of Shaughnessy for the lavish hardcover retrospective The Call of Trains (W.W. Norton, 2008). “Jim was a pioneer, a door-opener. His widespread acclaim deservedly conferred upon him the title of Master Photographer.”

Shaughnessy was as prodigious as he was creative. His collection includes perhaps 100,000 negatives, with thousands of images published in books and magazines. Numerous prints have made it into fine-art collections. His photos also had 13 appearances on the cover of Trains, more than almost any other photographer.

Jim Shaughnessy was born in Troy on November 24, 1933, to a religious Irish-Catholic family. His father, James, was for many years the superintendent of grounds and buildings at Saint Joseph’s Seminary overlooking the city. His mother, Helen, was a secretary at the W. & L. E. Gurley Co., which manufactured precision instruments.

Both parents were attentive and encouraging, and clearly imparted in their son a sense of the value of practical work, very much in keeping with the industrial city of Troy itself, a frequent subject for Shaughnessy’s camera.

There was another key family member: his uncle, Cornelius “Con” Shaughnessy, a one-time valve setter on steam locomotives for the Delaware & Hudson Railroad. When Jim was growing up, Con was a boiler inspector for the Hartford Insurance Co., a job that allowed him to take his nephew along for inspections, almost like an apprenticeship in steam.

Shaughnessy began his photographic career as a youth, focusing on Troy. The city was an ideal classroom, blessed with a variety of railroads and a compelling geography, tucked as it is into a narrow stretch of the Hudson River Valley north of Albany. The young photographer became a regular at Troy Union Station, a Beaux Arts edifice in the middle of town serving trains of New York Central, Boston & Maine, and Delaware & Hudson.

One of Shaughnessy’s favorite railroads was the D&H, which had its headquarters nearby in Albany. Many years later, his credentials fully established, Shaughnessy would write the definitive corporate history Delaware & Hudson for publisher Howell-North Books.

After briefly attended Champlain College, Shaughnessy moved on to Troy’s prestigious Rensselaer Polytechnic Institute, to prepare for a career as a professional engineer. At RPI, he joined the institute’s venerable model railroad club, where he became friends with another future railroad photographer and author, William D. Middleton.

As he moved beyond his teenage years, Shaughnessy began to take his camera further afield, heading mostly north and east, where he found rich hunting grounds in the northern reaches of New York, as well as Vermont, New Hampshire, Massachusetts, Quebec, and the Maritime Provinces.

Shaughnessy was drawn to the major carriers of the region – B&M, Central Vermont, Canadian National and Canadian Pacific – but he also photographed smaller, iconic entities such as the St. Johnsbury & Lake Champlain and Saratoga & Schuylerville. His first photograph in Trains appeared in the May 1952 issue, a view of the Mount Washington Cog Railway near Bretton Woods, N.H., and credited “J.J. Shaughnessy.”

He also fell under the spell of the Rutland Railroad, and told the entire story of the railroad in his critically acclaimed book The Rutland Road, first published by Howell-North Books in 1964, with a new edition from Syracuse University Press in 1997.

Gradually Shaughnessy took his camera west to southern Ontario, Michigan, Ohio, and Illinois. He later said he made eight trips with his friend Phil Hastings, with whom his work is often compared.

Shaughnessy’s reputation grew considerably, mostly in the pages of Trains. The editors knew that, in Shaughnessy, they could expect images that were beautifully composed and technically flawless, evidence of his tremendous skill in the darkroom. He was a master of the action photograph, taken in all manner of inclement weather, but he was also made frequent night photographs and depictions of railroaders at work.

For longtime Trains Editor David P. Morgan, Shaughnessy was invaluable for another reason: his embrace of the diesel. Morgan’s great challenge in the 1950s was to sustain the appeal of the magazine despite the loss of steam, and Shaughnessy was an ideal foil. “Yes, the diesel was more predictable,” Shaughnessy said, “and it quietly went about its business. It presented a different kind of visual challenge. But this was a transition era. It would only happen once. I was glad to be there for it.”

The Railway & Locomotive Historical Society in 1987 honored Shaughnessy with its Fred A. and Jane R. Stindt Photography Award. In addition to his 2008 book The Call of Trains, his pictures were featured in another hardcover portfolio, Jim Shaughnessy: Essential Witness, published in 2017 by Thames & Hudson.

Shaughnessy’s love of railroading never flagged, and his work continued to attract new fans into the 21st century. In 2007, Classic Trains magazine launched “The Shaughnessy Files,” a regular feature showcasing not only some of Shaughnessy’s best images – some for the first time – but also his memories of individual trips and subjects.

Apart from railroad photography, Shaughnessy had a long career as a licensed professional engineer. He taught civil engineering for many years and retired in 1995 as the director of environmental health for Rensselaer County. He is survived by his wife, Carol Shaughnessy, by a son, James, and two grandchildren.

A wake for Jim Shaughnessy is scheduled for 4 to 7 p.m. Aug. 10, at the McLoughlin and Mason Funeral Home in Troy, followed by a funeral mass Saturday at Our Lady of Victory Church in Troy. Burial will be Troy’s Oakwood Cemetery.