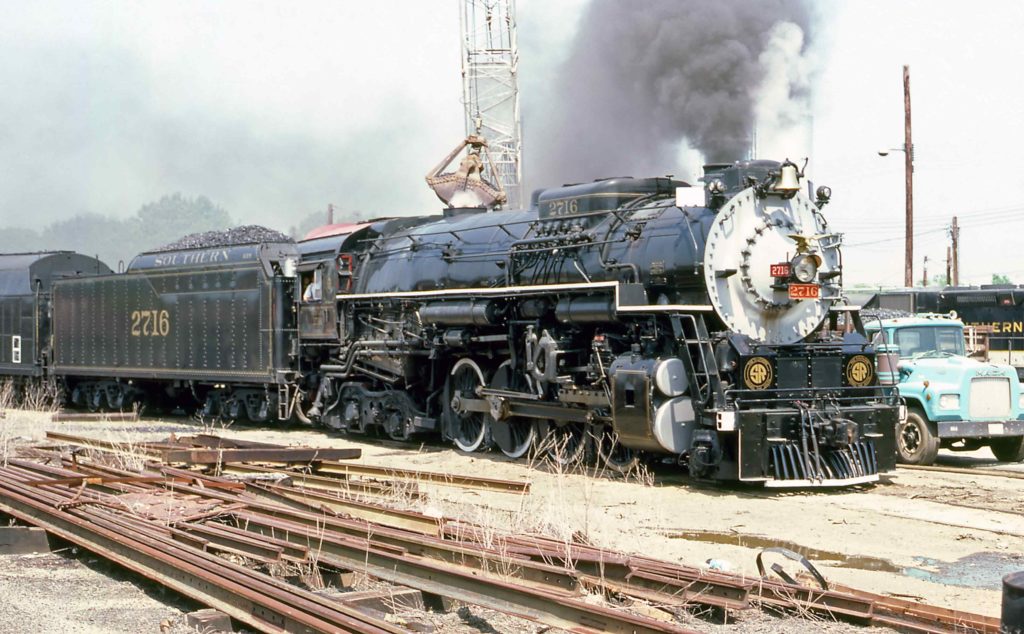 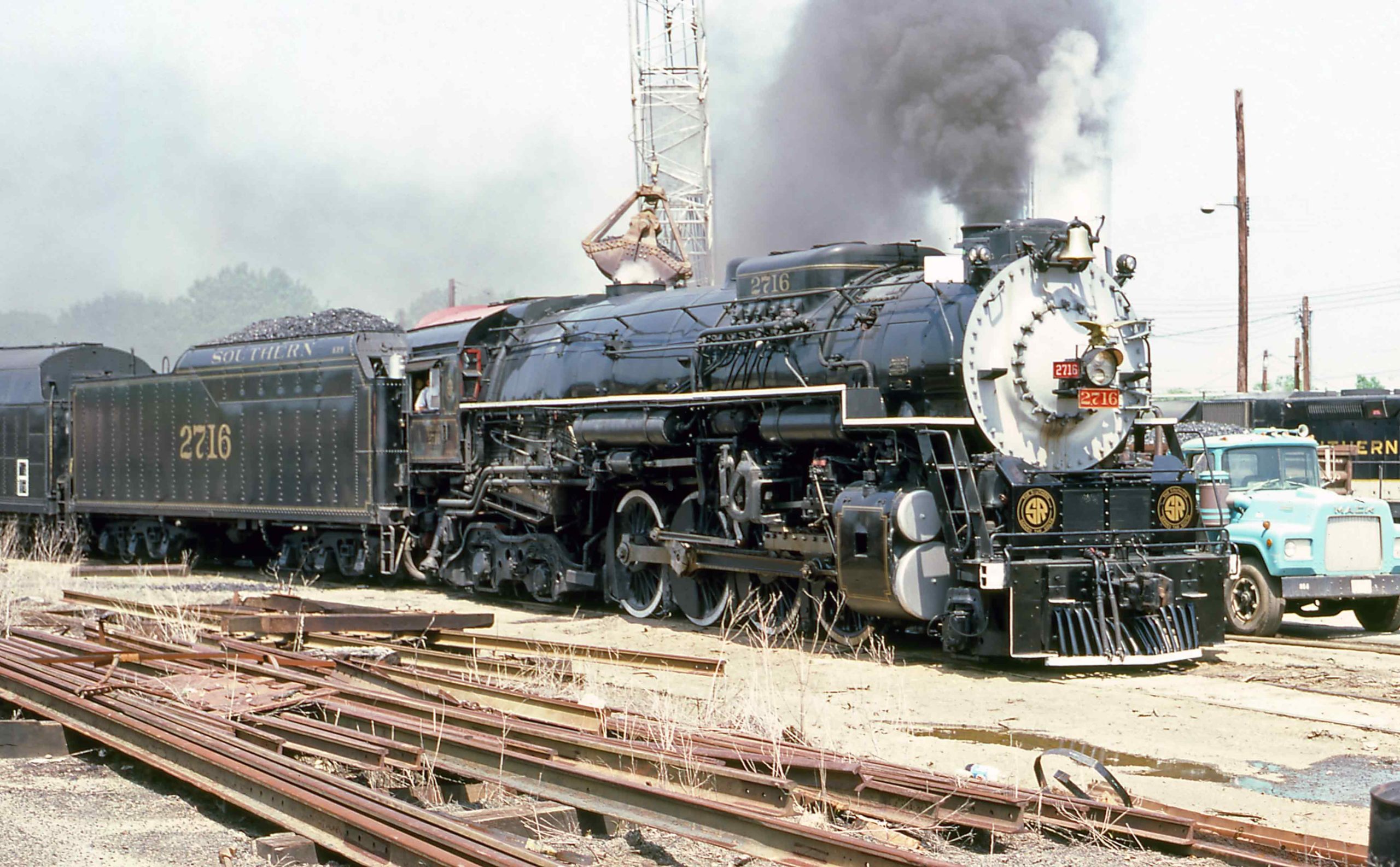 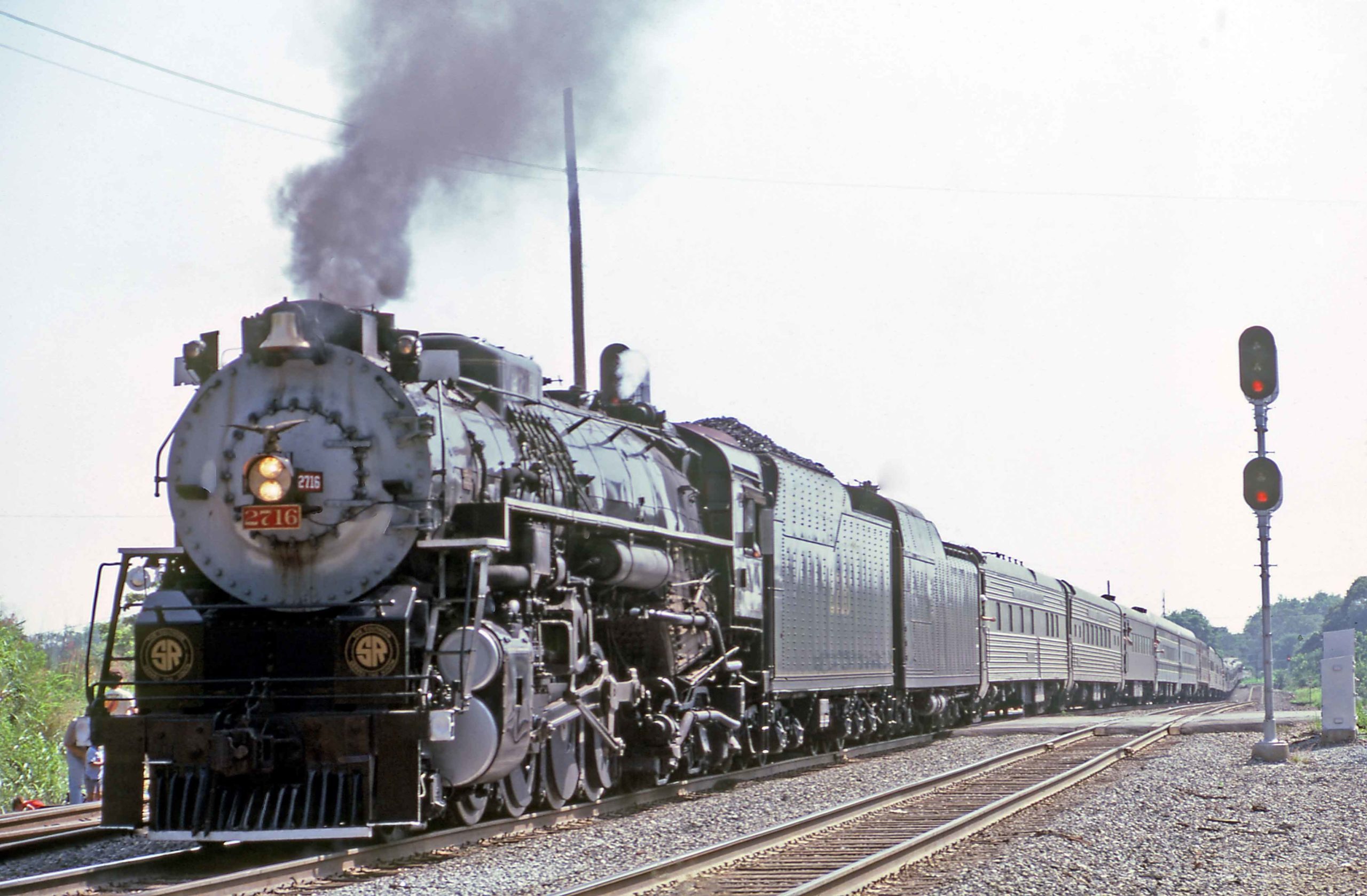 C&O No. 2716 steams northbound at the Amtrak station on the Southern Railway main line, bound for Greensboro, N.C., in July 1982.
Jim Wrinn
LEXINGTON, Ky. — A non-profit Kentucky group says its members will restore Chesapeake & Ohio 2-8-4 No. 2716 to operating condition.

The Kentucky Steam Heritage Corp.’s announcement this morning coincides with the calendar date, 2-7-16, and comes almost 20 years after the big Kanawha-type locomotive last operated in the 1990s. The locomotive is owned by the Kentucky Railway Museum and has been restored to operation on two different occasions: once by the Southern Railway in the 1980s and once by the Fort Wayne Railroad Historical Society in 1996.

This week, the group signed a long-term lease for the locomotive. Group members expect to move the engine to the Lexington area later this year. Chris Campbell, president and founder of the Kentucky steam group, tells Trains News Wire that the group hopes to have the engine steamed up by 2020. The restoration is expected to cost between $800,000 and $1.3 million.

No. 2716 was one of 90 Kanawhas purchased by the C&O between 1943 and 1947 for use in both freight and passenger service. Today, a dozen of the locomotives remain but only No. 2716 has ever run in the preservation era, albeit on two separate but brief occasions. When the locomotive was first restored by the Southern in 1982, it was given a makeover to look more like that road’s own locomotives, even though the Southern never had 2-8-4s. The C&O veteran was among the first “Superpower” locomotives used in the Southern’s steam program and Campbell says that is one of the reasons why the group selected it for restoration.

“The locomotive’s roots run abnormally wide through the region,” he says. “It’s a C&O locomotive but it also has ties to the Southern Railway and even though it was only part of their steam program for a few months it left its mark.”

Another reason the locomotive is an attractive candidate for operation is that it has been restored on two different occasions in the last 35 years but has rarely run. However, since the locomotive last ran, the Federal Railroad Administration’s rules for steam locomotives have changed, meaning the No. 2716 will need a full and complete 15-year overhaul before it can be fired up. The restoration is being headed up by Jason Sobczynski, who has been involved numerous other steam restorations, including the current effort to preserve and operate Reading Company 4-8-4 No. 2100. In November 2015, Sobczynski and others from the Kentucky steam group did a complete inspection of No. 2716 and found it to be in sound condition. While rumors have spread in recent years that the locomotive’s firebox is condemned, officials say ultrasonic readings on the interior of it show that while parts will need to be replaced, a vast majority of it is still in excellent condition.

“Most aspects of No. 2716 are in better condition than many of today’s operating locomotives,” Sobczynski says.

The locomotive will be restored at a yet-to-be determined facility in the Lexington area. Campbell says it’s important to the group to locate the project there not only because of the C&O’s ties to the town but because they hope to involve the local community, not just rail enthusiasts and steam fans.

“This project will help Lexington reach back to its industrial roots,” he says.

Although the group has not spoken publicly about where they hope to operate the locomotive, Campbell says they have already talked to some short lines that are open to hosting the locomotive. He also says they are optimistic the locomotive will be able to run on a main line in the future.

The locomotive is being restored in conjunction with the Kentucky Railway Museum, which also owns Louisville and Nashville 4-6-2 No. 152. Board member Rob Minton says the museum is working closely with the Kentucky steam group and that they’ve been impressed with the non-profit’s enthusiasm and ability.