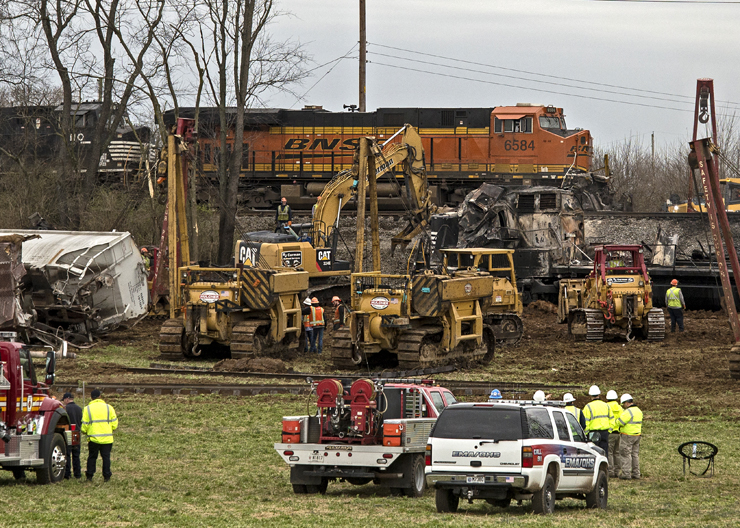 A view on the aftermath of a March 18 train crash in Georgetown, Ky. Norfolk Southern is suing two of the railroaders for negligence in the crash that destroyed two locomotives, derailed 13 freight cars, and injured four railroaders.
Tyler Hardin
LEXINGTON, Ky. — Norfolk Southern is suing one of its own train crews involved in a March 18 head-on collision in Kentucky.

In a lawsuit filed April 5 with the U.S. District Court for the Eastern District of Kentucky, in Lexington, NS attorneys allege that Engineer Kevin Tobergte and Conductor Andrew Hall failed to keep a “reasonable lookout” so they could slow their train and eventually stop it.

Tobergte and Hall were in charge of southbound train No. 175. According to court documents, the train was stopped on NS tracks in Georgetown, Ky., when northbound NS train M74 collided head-on with No. 175. The collision sparked a blaze, derailed 13 freight cars, and injured four railroaders.

NS lawyers allege southbound train No. 175 went through an Approach and Stop signal without slowing or stopping until after the crew passed the Stop signal. Lawyers for the railroad also tell the court that after the train crew made an emergency brake application, they failed to alert dispatchers over the radio or declare an emergency.

The railroad seeks compensation from the railroaders to cover the cost of damages to two destroyed locomotives, derailed freight cars, the right-of-way, tracks, signal equipment, loss of use of the equipment, diesel fuel clean-up, as well as damage payments to landowners adjacent to the wreck and NS customers for delayed freight.

Norfolk Southern declined to comment on the matter because it is pending litigation, a railroad representative wrote in an email to Trains News Wire. Addresses for the train crew were listed in the court filing, but Trains was not able find quick contact information for the railroaders and get their comment. The Brotherhood of Locomotive Engineers and Trainmen, a railroad labor union, did not immediately respond to a request for comment.

The allegations, if true, represent a serious operating failure.

Trains News Wire spoke with a railroader familiar with Norfolk Southern operating practices who says, on background, that any time a train on NS goes into emergency, the first priority of the train crew is to call on the radio, “Emergency” three times followed by the train’s location to alert dispatchers and nearby trains.

If the No. 175 crew did not do this, as NS alleges, the crew on train M74 would have had no idea until they could see train 175, at night, that it was blocking their path.

One operational practice not mentioned in the Federal court filing was whether the 175 train crew called on the radio signal indications as their train passed signals — another NS requirement to ensure train crews remain alert, the railroader tells Trains.

The railroaders in the lawsuit have about three weeks to respond to the court filing.