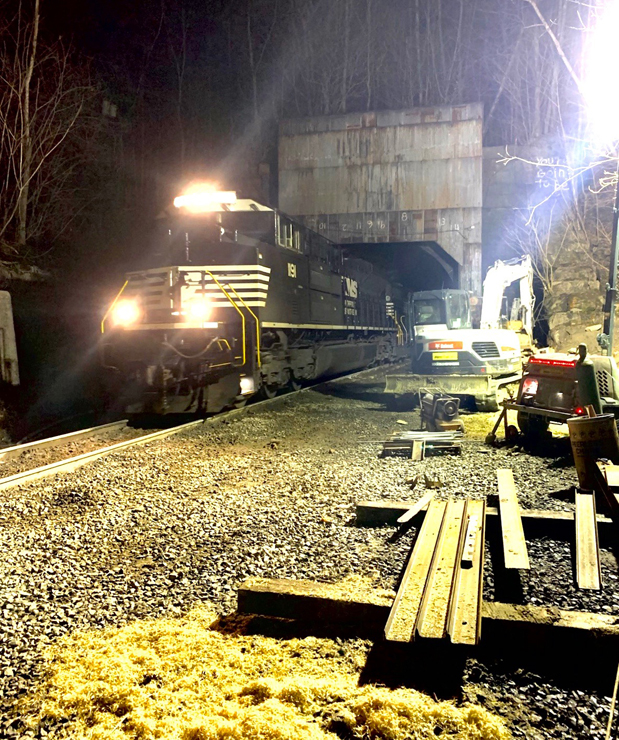 — Pan Am Railways’s Hoosac Tunnel in Western Massachusetts, closed since Feb. 12 because of the partial collapse of a wall, reopened Saturday night, Norfolk Southern has reported to its customers. The first train through was East Deerfield, Mass.,-to-Binghamton, N.Y., train 11R. Work on the tunnel will continue through April, requiring 12-hour closures which could delay some traffic. Tunnel repairs required installation of 40 arches at its west end, with plates welded between those arches.

— BNSF Railway has terminated the lease of its 13-mile branch between Columbia Falls and Kalispell, Mont., which had been operated by Watco’s Mission Mountain Railroad since 2004. BNSF resumed operations on the line April 1, the Flathead Beacon reports. The Mission Mountain will continue to operate a line between Eureka and Stryker, Mont., but will cut from seven employees to three. The short line was featured in the “Train-Watching” section of the Feb. 2020 Trains.

— L.A. Metro will be able to speed up construction of the Wilshire/Rodeo station on the Purple Line subway extension thanks to a decision by the Beverly Hills City council to allow closure of Wilshire Boulevard. Metro says the move will allow contractors to complete decking for the station sooner than expected “and will help us minimize future construction impacts to local businesses as they struggle to overcome the impacts of the COVID-19 health crisis.” Metro is also offering daily updates on confirmed COVID-19 cases among Metro employees here, and its latest service updates here.

— Landrum, S.C., has received a $200,000 grant toward refurbishing a former Southern Railway passenger car for use as the Landrum Rail and History Museum. GoUpstate.com reports that the $200,000 grant from the South Carolina Department of Parks, Recreation and Tourism will cover about half the cost of restoring the Pacolet River, a 10-roomette, six-bedroom sleeper built by Pullman Standard in 1949 for Southern’s Crescent Limited.