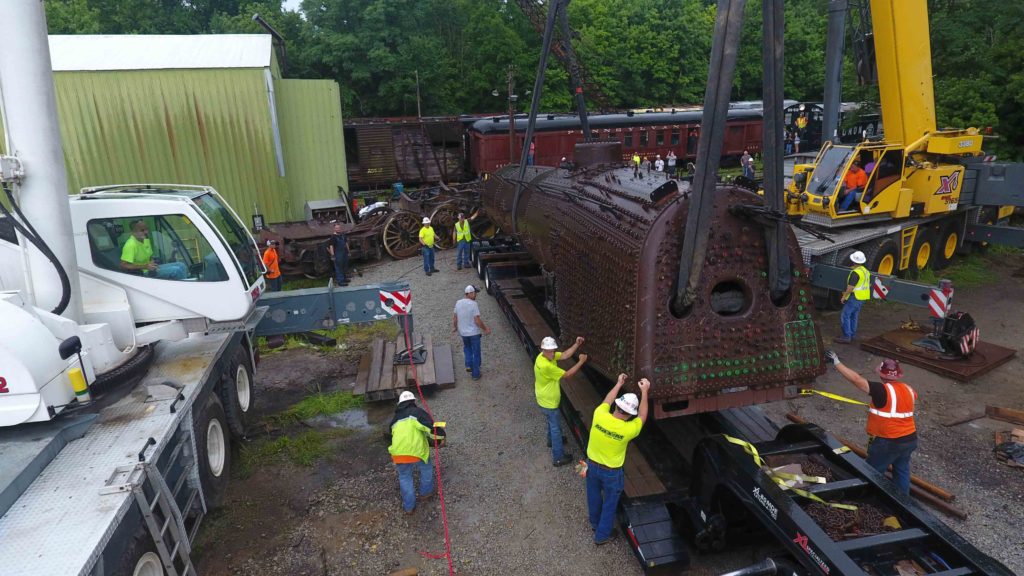 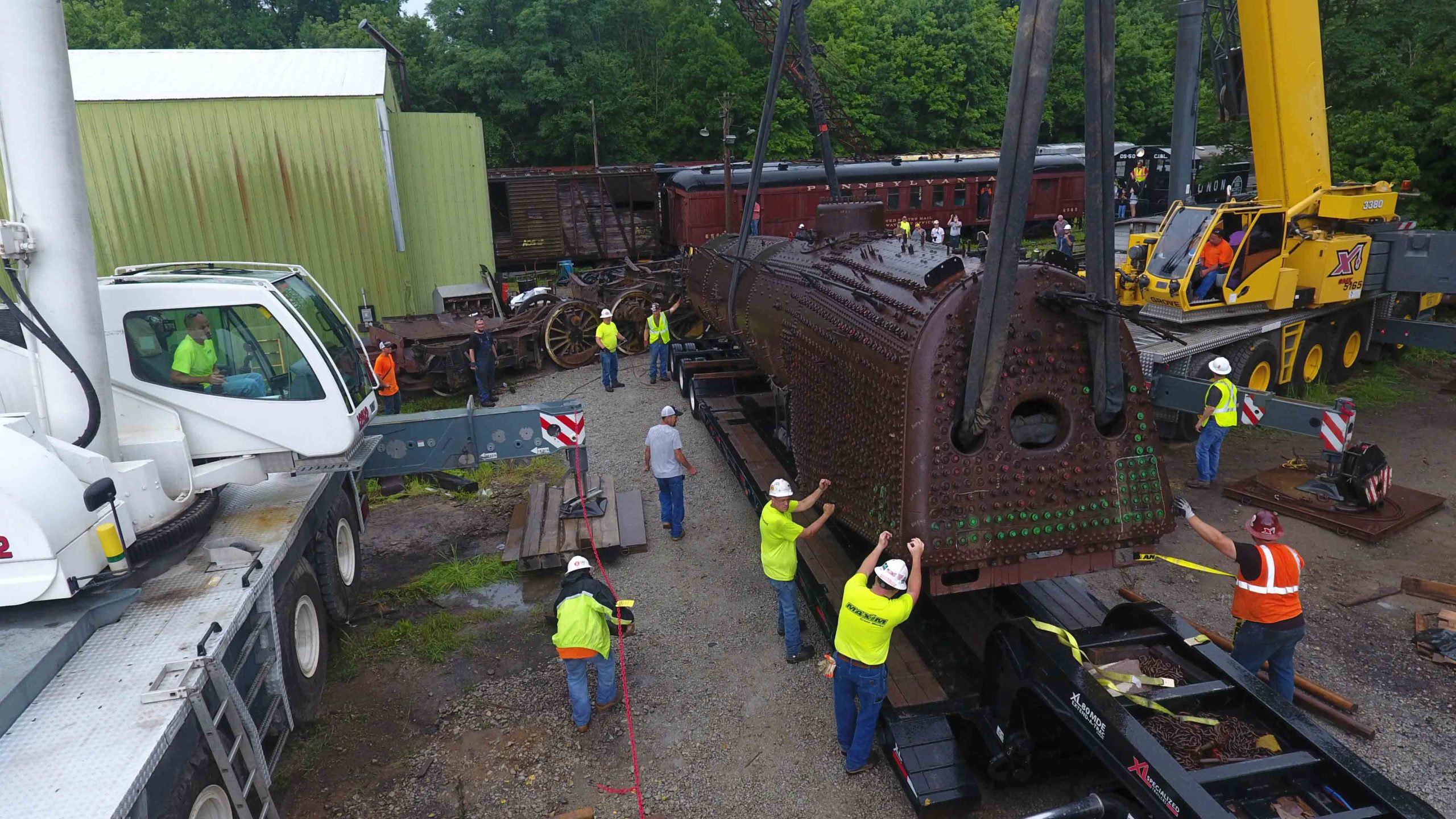 Nickel Plate Road 587’s boiler is set onto a truck at Noblesville, Ind., on Thursday. It will go to Kentucky for safe haven.
Delay In Block/KSHC
NOBLESVILLE, Ind. — Triumph and tragedy are relative terms, but they seem appropriate for describing what’s happening this week in Noblesville’s leafy Forest Park, where preservation organizations are fighting a deadline to save equipment threatened by the Indiana Transportation Museum’s eviction from its long-term home.

Already, a number of pieces in the ITM collection have been cut up, as the museum struggles to obey a local circuit judge’s order to vacate the property by July 12. But even as workers with acetylene torches and backhoes have gone about their grim task, a number of important cars and locomotives have been saved.

The most notable victory was obvious on Thursday night, as crews from the Kentucky Steam Heritage Corp. oversaw the loading of seven flat-bed trucks carrying major parts of Nickel Plate Road 2-8-2 No. 587, the former mainline excursion engine stored in an ITM shop awaiting restoration. The USRA light Mikado, built by Baldwin in 1918, will continue to be owned by ITM.

The 2-8-2 is headed for the former Louisville & Nashville shops at Ravenna, Ky., where KSHC plans to locate per an agreement with CSX Transportation. Kentucky Steam is already at work on the restoration of Chesapeake & Ohio 2-8-4 No. 2716 at the Kentucky Railway Museum in New Haven.

To move the 587, the museum and KSHS engaged the services of Underwood Machinery Transport, Ind., of Indianapolis, which was involved in moving the engine out of Broad Ripple Park in Indianapolis in the 1980s, when the locomotive first went to ITM. Kentucky Steam also has purchased a former Pennsylvania Railroad Railway Post Office, which ITM had been using as a tool car.

Kentucky Steam President Chris Campbell says his organization didn’t plan on acting as a savior for 587, but his team was glad they could step up when duty called.

“It’s honestly not something we set out to do, but the stars aligned,” says Campbell. “Because of the facility we’re getting we are hoping to become a restoration shop, so the situation with ITM notwithstanding, this is a job we’d want to do anyway. Our actual mission is restoring steam locomotives.”

Another preservation group, the Hesston Steam Museum, was also on site this week, having acquired former Indianapolis Power & Light 0-4-0 fireless cooker No. 1 to be transported to its 155-acre site near La Porte, in northwest Indiana, where the organization operates a small narrow-gauge steam railroad.

At least one other major institution, the Age of Steam Roundhouse in Sugarcreek, Ohio, also has an interest in some of the equipment. Representatives of the privately owned steam facility visited Noblesville last week and marked 14 various cars as “AOS,” with acquisition to be negotiated in the coming weeks.

Meanwhile, anything left on the site after the July 12 deadline is presumably considered abandoned and, according to the court order, would become the property of the city of Noblesville. City leaders have made clear their hostility to the railroad museum, so the worse could be expected for whatever is left.

The museum has more than 100 items on its roster. Already, a number of pieces of historic equipment have been scrapped, and the situation remains fluid. The preservation group Ahead of the Torch has published a list on its Facebook page, which includes the following losses:

• Milwaukee Road SW1 No. 1613, built by Electro-Motive Corporation in 1939 as MILW 867. The switcher was recently repainted in Milwaukee Road orange and maroon by volunteers, in an effort to eliminate the diesel’s appearance as an eyesore.

• Five Chicago Transit Authority 4000-series cars, built in the 1920s by Cincinnati Car Company. Among the lost CTA equipment is work motor S369, converted from an elevated coach in 1972.

• Evansville & Ohio Valley steeple-cab No. 154. This standard interurban motor was built by General Electric in 1912 for a railroad in Portsmouth, Ohio, and later was acquired by the E&OV in southwestern Indiana.

• Indianapolis & Cincinnati Traction Co. interurban car 606, body only. The Cincinnati Car Company built the car in 1923; it later was acquired by the Indiana Railroad.

• Nickel Plate wooden coach No. 45, built by ACF in 1907. Last week, the car was torn apart in minutes by a clamshell-equipped backhoe.

The museum has been in deep trouble since 2016, when a deep rift between museum management and factions of volunteers became public, putting ITM in the spotlight of local news media.

Operations over a portion of the museum’s track were suspended at the behest of the railroad’s landlord, the Hoosier Heritage Rail Authority, which was concerned about track conditions after complaints were filed with the Federal Railroad Administration. The authority owns the 37-mile former Norfolk Southern (ex-Nickel Plate) branch line between Tipton and Fishers, which includes the museum grounds at Forest Park. The line is severed at each end from the national system.

The dispute also led to the cancellation of ITM’s popular FairTrain to the Indiana State Fair, easily the institution’s most lucrative operation. In its last years, the museum was hauling 10,000 passengers to the fair each season.

As of this week, the future of much of the other equipment remains unclear. ITM’s current leadership is hanging on to some of it in anticipation of re-establishing itself at a new location. One site reportedly in the running is Logansport, 77 miles north of Indianapolis.

Meanwhile, after the dust settles in the woods of Forest Park, a lot of soul searching can be expected in the railroad preservation community. One lesson already underscored: the wider world with direct connections to railroad museums and tourist lines has little interest in the nobility of the cause. What it does expect, and will increasingly demand, is competent museum management with a credible strategic plan.