Creel: 'If I did and said some of the things Hunter said and did, I’d be in jail.' 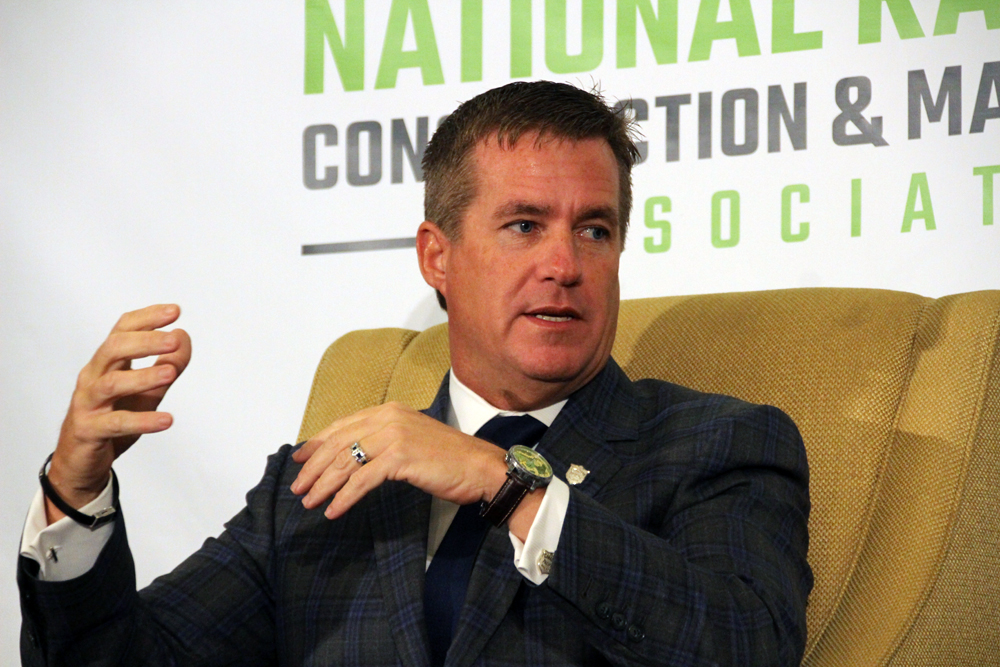 Creel, the keynote speaker Monday at the National Railroad Construction and Maintenance Association Conference, also delivered a strong defense of PSR, and, while continuing to pay homage to his mentor, PSR pioneer Hunter Harrison, noted ways in which both he and CP have adjusted from Harrison’s philosophy.

Creel, CP’s CEO since 2017, says consolidation will come because of the need to increase rail capacity to deal with growth.

“The need for transportation is going increase; it’s not going to decrease,” he says. “… Eventually, to create more capacity — because nobody wants to build any more railroads; you can’t justify them and nobody wants you in their backyard — you’ve got to create capacity by eliminating handoffs and interchanges, and bigger, longer networks that are optimized.

PSR, in creating more capacity through scheduling and more efficient use of assets, has delayed that inevitability, Creel says.

“Two years ago, I would have said that consolidation, driven by trouble, driven by lack of capacity … would have occurred in a five-year timespan,” he said. “I think [now] it’s more of a 10-year deal.”

He acknowledges that the regulatory barrier is significant, because the Surface Transportation Board, which must approve any merger, is “pro-service and pro-competition. The only way you’re ever going to meet or exceed that challenge is to be a railroad that can do both. And if we are able to continue to sustain our success, then I believe we can. … When it comes time to dance, we want to be a pretty attractive dance partner.”

PSR, he said, is primarily about change, something he said benefit the long-term stability of the railroad.

“Because if we go away, or we’re carved up into short lines that aren’t going to have the same resources that the main line might have, I would suggest that’s not good for your business, either,” Creel said. “So embrace it. It’s not going to go anywhere.”

Creel acknowledged that now-retired BNSF Railway Executive Chairman Matt Rose spent some time prior to his departure criticizing the industry’s embrace of PSR. Rose, in fact, addressed that topic a year ago in his own appearance at the NRC Conference.

“I would suggest it’s just a lack of understanding,” Creel said. “… You’ve got to remember if you do PSR right, it’s a long-term story. It’s about creating a well-run company that’s highly capital intensive that you can invest money back into, to sustain success long-term and to grow with.”

While Creel remains effusive in his praise for Harrison and his impact on railroading, he said he also knew he would have to operate in a different fashion as CP’s CEO.

“He had tremendous insight into the industry, but not a lot of patience,” Creel says. “… I was in tune enough to realize that I could not be Hunter Harrison. If I did and said some of the things Hunter said and did, I’d be in jail. I told him that, and I’ll tell you that.”

Creel said he wanted to connect more with customers, employees, and regulators.

“Hunter didn’t like the roads going to Ottawa. He didn’t like the roads going to Washington D.C. He just didn’t see a whole lot of value in it. But I see it as necessary. Because if nothing else, if you’re driving change, if you don’t go to explain your story and you’re not understood, it can become very dangerous. … If you can lead to a better understanding that leads to a better outcome, based on facts and not politics, that’s a pretty good recipe.

“Hunter was human. He didn’t get it all right. But I’m telling you, I never met another railroader — and I know he’ll go down in history as the best railroader in the history of railroading — that got as much right as that man did. And it might not have been the popular thing, but it was the right thing.”

–This story was edited Jan. 7 to fix a reference to PSR