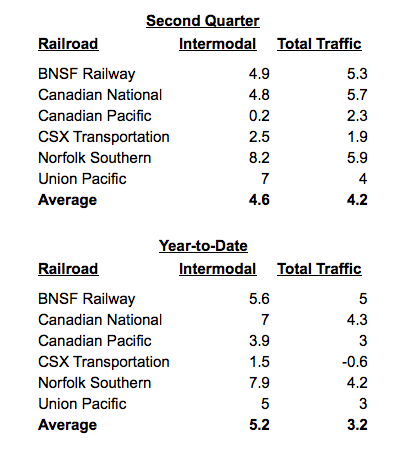 Named Class I Railroads; Bill Stephens
NEW YORK — Five of the big six Class I railroads reported traffic gains in the first half of the year amid a strong economy, tight truck supply, and soaring truck rates.

BNSF Railway led the industry in growth through June 30, with traffic up 5 percent overall, according to its latest Association of American Railroads weekly carload report.

At the other end of the spectrum, CSX Transportation’s total traffic was down 0.6 percent for the first six months of the year due to a decline in carload volume and the impact of intermodal service changes.

For the second quarter, NS led the industry in overall growth, too, with its traffic surging 5.9 percent, squeaking by Canadian National’s 5.7-percent volume growth.

Both railroads continue to experience congestion issues, with NS bogged down on the southern reaches of its network and CN clogged on its key corridor linking Edmonton, Alberta; Winnipeg, Manitoba; and Chicago.

The impact of a pair of strike-related shutdowns at Canadian Pacific in April and May showed in its preliminary traffic counts. The Teamsters Canada Rail Conference, which represents train crews on CP’s lines in Canada, threatened to strike in April, then briefly struck the railroad in May.

Union Pacific reported strong intermodal growth for the second quarter, with volume up 7 percent in part due to landing the contract to handle Ocean Network Express, or ONE, international intermodal business at West Coast ports.

UP has long lagged BNSF in volume growth, but topped BNSF’s intermodal growth of 4.9 percent in the second quarter.

“I don’t think there is a lot of overlap between rail carload and truck these days,” Gross says.

“So I think whatever strength we are seeing right now in carload is more a function of a spurt in the economy rather than share shift,” Gross says.

It’s a different story for domestic intermodal, which Gross calls the battleground between rail and truck. And to a certain extent, the service problems at some of the Class I systems meant that railroads could not fully capitalize on the opportunity to gain share.

“Intermodal volume was definitely constrained in in the first quarter by lower equipment velocity and consequent shortages in domestic container capacity. In particular we saw disruptions in the rail-owned container fleet productivity due to some friction between the railroad partners,” Gross says. “So volume was left on the table — or should I say, the highway.”

The situation has improved in the second quarter, but complete intermodal data from the Intermodal Association of North America is not yet available.

“My sense is that intermodal gained share in the second quarter and perhaps held its own in the first quarter,” Gross says.

John Gray, the AAR’s senior vice president of policy and economics, says rail volumes show the economy is humming along.

“In June, 14 of the 20 commodity categories the AAR tracks each month saw carload gains – the third straight month in which at least 14 categories were up. That’s the longest such streak since late 2014,” Gray says. “Meanwhile, record intermodal volume for June speaks to the high value proposition that rail customers associate with intermodal service. For now, things are looking good for the railroads and the economy despite the many threats, such as a potential trade war, that could bring change quickly.”

North American rail volume for the first 26 weeks of 2018 was 18.7 million carloads and intermodal units, up 3.3 percent compared with 2017.

Of note in the intermodal traffic figures: The continued spike in trailer volume, which for the second quarter was up 27 percent on BNSF and 22 percent on NS and UP. Trailers have been in decline for years as containers became the favored way to move domestic shipments due to the cost advantages of double-stack trains.

Gross attributes the rise in containers to two things. The first is shippers looking for intermodal capacity but can’t find a domestic container. The second is truckers who have loads but not enough drivers or containers and instead put their trailers on flatcars.