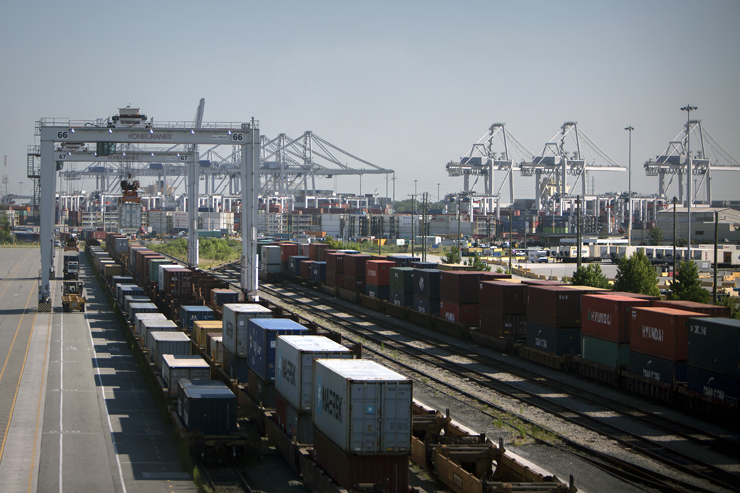 With the enlarged Panama Canal available since 2016, eastern ports have been upgrading to lure Pacific ship traffic away from the West Coast. Ships from Asia spend more days at sea by going through Panama, but the enlarged canal allows bigger vessels with nearly triple the number of containers, resulting in overall cost savings.

GEORGIA
Among the most aggressive expansions is happening at the Port of Savannah. Its recently approved $92 million Mason Mega Rail Terminal will by 2020 double port rail capacity to 1 million containers and make it North America’s largest port rail facility.

NEW YORK
CSX and NS are also benefiting from the ExpressRail project of the Port Authority of New York and New Jersey completed in January. ExpressRail improvements include the addition of four tracks and two rail-mounted cranes for handling containers. Later this year, the facility will expand to 9,600-linear-feet of an eight-track working pad, along with addition of a second lead track and more rail car storage capacity. The port has moved 15 percent of its traffic from truck to rail.

SOUTH CAROLINA
The South Carolina Ports Authority opened Inland Port Dillon in 2018. Transporting containers on CSX, the facility at Dillon, S.C., extends Port of Charleston intermodal activities some 100 miles inland, linking them to nearby Interstate 95 and to area logistics activities that include a Harbor Freight Tools distribution center.

NEW ORLEANS
With a record 2018 handling of nearly 600,000 twenty-foot equivalent containers, the Port of New Orleans saw a 15-percent growth in intermodal traffic, most of it on Canadian National service to Memphis, Chicago, Detroit, and Toronto, port officials say. There’s also weekly Kansas City Southern service to Dallas-Fort Worth. In 2018, the port acquired the 26-mile New Orleans Public Belt Railroad, which switches the terminal and connects with CN, KCS, Union Pacific, CSX, NS, and BNSF Railway. The Port of New Orleans anticipates increased rail service and is expanding its ship handling facilities.

LA-LONG BEACH
On the West Coast, the Port of Long Beach is working to get trucks off local highways by launching a 13-year $1 billion rail upgrading project. Primary thrust of the port’s rail improvement effort is $870 million to build the Pier B on-dock rail support facility, an intermodal terminal completely served by rail. Initial arrival, departure, and storage tracks are to be completed in 2024, with more tracks in 2030, and project completion two years later. Work is set to begin later this year on a new $25 million 9,000-foot departure track for rail traffic from four other of the port’s six terminals. Completion is expected late in 2021.

MEMPHIS
Port improvements also are affecting rail infrastructure growth along inland waterways and ports and at smaller port facilities. The Port of Memphis reports CN and CSX are in the planning stages to double the size of the Intermodal Gateway Memphis facility to allow tripling of annual capacity to 140,000 container units. The port recently received a $1.7-million Tennessee Department of Transportation grant to add 4,900 feet of rail and four turnouts to its Presidents Island public terminal.

US DOT PROJECTS
The U.S. Department of Transportation has also announced grants, which include track upgrades and 9,700 feet of additional track at the Port of Muskogee, Okla.; additional trackage for the Virginia Inland Port at Front Royal, Va.; development of rail-to-barge capability at the Port of Morrow, Ore.; rehabilitation of 15 bridges on the Port of Coos Bay Rail Line in Oregon, and lengthening of a lead track and a siding at South Carolina’s other inland port at Greer, S.C.

Growth in traffic and improved infrastructure are underway at the revitalized Port of Kansas City, reopened in 2012 following a five-year closure. Reconnected to UP a few years later, the facility is billing itself as a “port of the future,” aiming at growth in rail and barge traffic, along with capabilities for intermodal and light manufacturing, according to Waterways Journal.