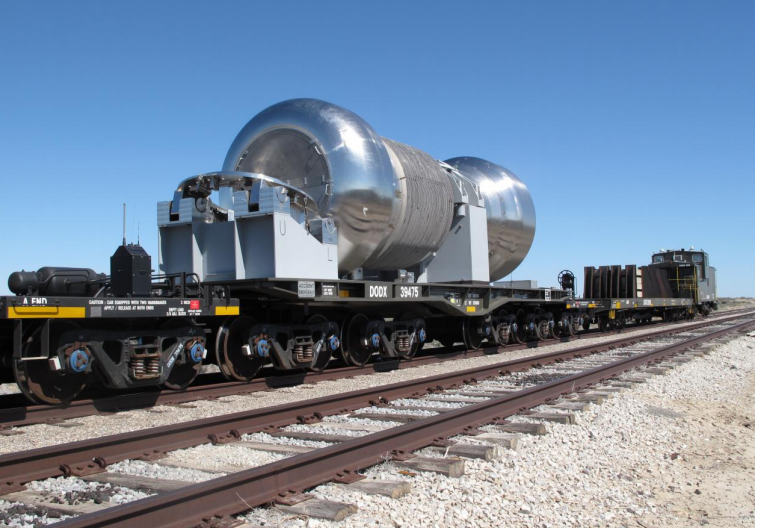 A Department of Defense train hauling a spent nuclear fuel cask in an undated photo.
U.S. Department of Energy
WASHINGTON — The resurrection of a controversial plan to store nuclear waste under Nevada’s Yucca Mountain could also mean a revival for a proposed rail line to the remote site.

In late March, the Trump Administration announced it would request $120 million in the upcoming 2018 budget to restart the licensing process for the Yucca Mountain project. While the Department of Energy is staying tight-lipped about the renewed prospects of building a brand-new railroad hundreds of miles across the desert, advocates for the project tell Trains News Wire that it is the most likely scenario should the project move forward.

The government first proposed storing thousands of tons of radioactive waste at the remote mountain in southern Nevada in the 1980s. However, Nevadans of all political backgrounds have been critical of the project and the Obama administration cut funding for it during his two terms.

Since the beginning, rail has been seen as the primary method to move nuclear waste to Yucca Mountain. Through the 1990s and early 2000s, the energy department studied up to five different routes to the site and eventually settled on one that runs 319 miles from the Union Pacific at Caliente, Nev., to Yucca Mountain. In the early 2000s, the federal government estimated that it would cost upwards of $2 billion to construct the mountainous line.

But the Obama administration threw a wrench in that plan in 2015, when it created the 700,000-acre Basin and Range National Monument, which cuts right through the proposed Caliente route.

“I think this is another nail in the coffin of Yucca Mountain,” former energy department official Timothy Frazier told the Las Vegas Review-Journal in 2015.

But with renewed support from the White House, the energy department may soon start looking for other routes to Yucca. In 2015, Gary Lanthrum, former chief transportation official for the project, told the Review-Journal that a shorter route to Yucca through the Walker River Indian Reservation was possible. That route would stretch 209 miles through the desert, northwest of Las Vegas, and part of it would be built on an abandoned Southern Pacific branch line.

What railroad-related work the government is doing right now is unknown. When Trains News Wire reached out to federal officials, they offered a prepared statement from Energy Secretary Rick Perry about the overall project but little else. However, a spokesperson for the Nuclear Energy Institute tells News Wire that it is likely any renewed plan to move large amounts of radioactive waste would include railroads.

“In the United States, we have transported used nuclear fuel by rail safely and efficiently for decades,” says institute representative Jarret Adams. “The vast majority of any used nuclear fuel transported to Yucca Mountain would be moved by rail and this would require a significant addition to rail infrastructure in Nevada.”

Nuclear Energy Institute officials add that between 1979 and 2007, approximately 2,400 metric tons of used nuclear fuel was safely shipped from commercial nuclear plants in the United States.

Department of Energy officials also discussed moving nuclear waste by rail in January at the Transportation Research Board.