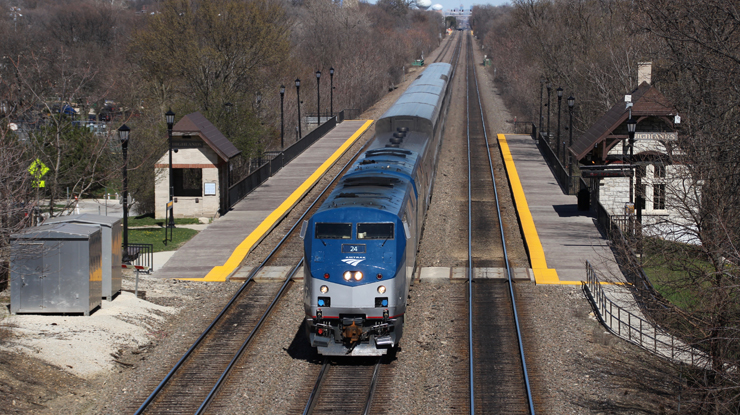 The Southwest Chief passes through Hinsdale, Ill., on April 28, 2018. Amtrak’s CEO says the effort to maintain the train must be balanced against the need of the entire national network.
TRAINS: David Lassen

WASHINGTON — Responding to a letter from two major private-car organizations, Amtrak President and CEO Richard Anderson says the passenger railroad is overdue for a review of how it operates its national network. Anderson also says efforts to maintain the Southwest Chief must be balanced against the needs of the entire Amtrak system and reiterates the company’s stance on charter trains and private car moves.

“Some parts of Amtrak’s business have operated in the same manner for 47 years, and the world is changing around us,” Anderson said, noting that passengers today have different expectations and travel options. “For Amtrak to respond to these changes and remain relevant, we need to carefully review how we allocate our resources, deploy our assets, and positions our products.”

Anderson also disagreed with the private car groups’ contention that end-to-end ridership on long-distance trains is meaningless, given the number of passengers who travel between intermediate points.

End-to-end ridership, he wrote, “points directly to the fact that the markets and customers that those trains attract should be better served by Amtrak. I see no reason not to be open to looking at our network and products from a fresh perspective. While change can be difficult and solutions to some of the objections you raise may not be immediately apparent, we have a responsibility to consider how to best serve our current customers and the future of the national railroad system.”

He did agree with the private car groups’ assertion that passenger rail has an important economic role, and that “there are challenges with asking the states to fund long-distance trains in their current form. And we agree that to terminate the long-distance trains with nothing to take their place would result in a crippled transportation network that would greatly diminish the value our trains offered to our customers and the communities they serve.”

But he also said that “viable transportation businesses are not static” and that Amtrak is “thinking carefully about how to attract the largest number of customers with an approach that is relevant, fresh, and financially sustainable.”

Regarding specific comments from the private-car groups about the Southwest Chief and the qualifications Amtrak has imposed a $3 million commitment toward work to maintain its route, Anderson did little to ease concerns over the train’s future.

“Our goal with the Southwest Chief,” he wrote, “is to ensure the creation of a coherent, long-term funding plan that involves commitments from all the relevant stakeholders that addresses the viability of the route, and to see the performance of this route improve. However, we must also be mindful of this particular route’s unique costs and it is our obligation to find the appropriate balance between preservation of any one route versus the needs of the entire National Network.”

On issues specific to private-car owners, Anderson reiterated Amtrak’s existing stance, that charter and private-car moves must align with the railroad’s focus on operating safely, punctually, and efficiently. Charter trains must operate on existing routes, and that extra moves should not have any impact on scheduled Amtrak trains.

“Amtrak supports the movement of private cars in regularly scheduled Amtrak trains,” Anderson wrote, “provided that we have the capacity to provide reliable private car services and that no scheduled passenger trains ever suffer any delays due to this service. Private cars will be added or removed from Amtrak trains only in circumstances consistent with this approach.”

A copy of Anderson’s letter is available here.