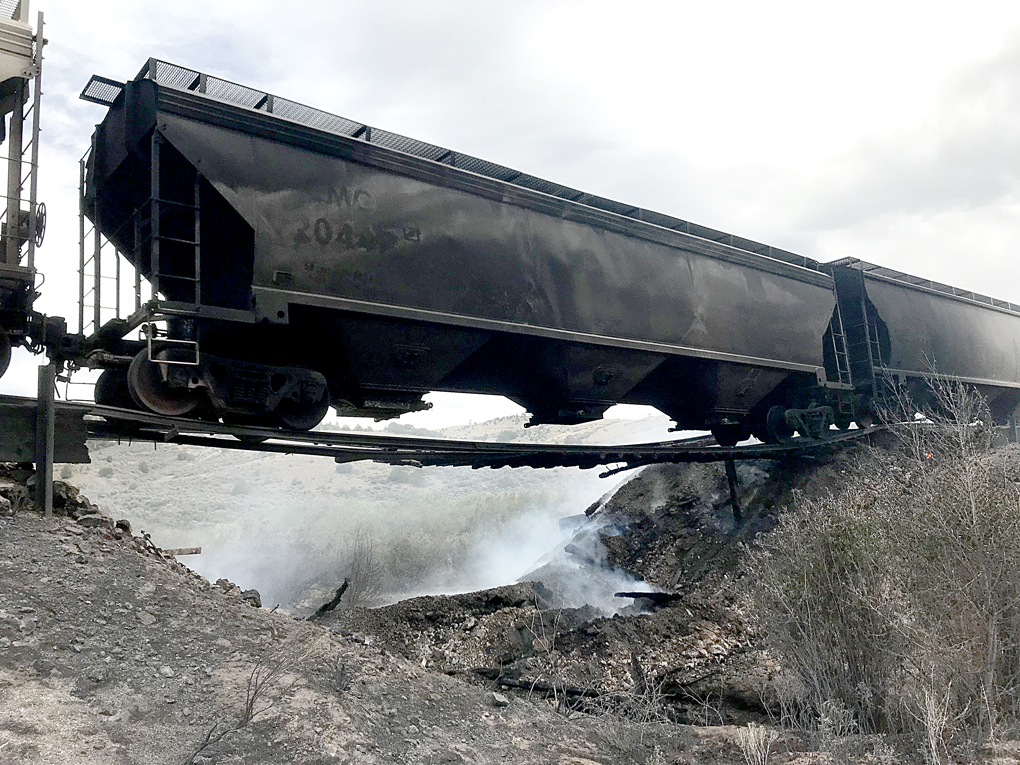 A burned covered hopper and bridge on the San Luis & Rio Grande line at Sierra, 40 miles east of Alamosa, Colo. Contractors have been on-site since July 2 and hope to have the rails replaced and operational by July 6.
Ed Ellis 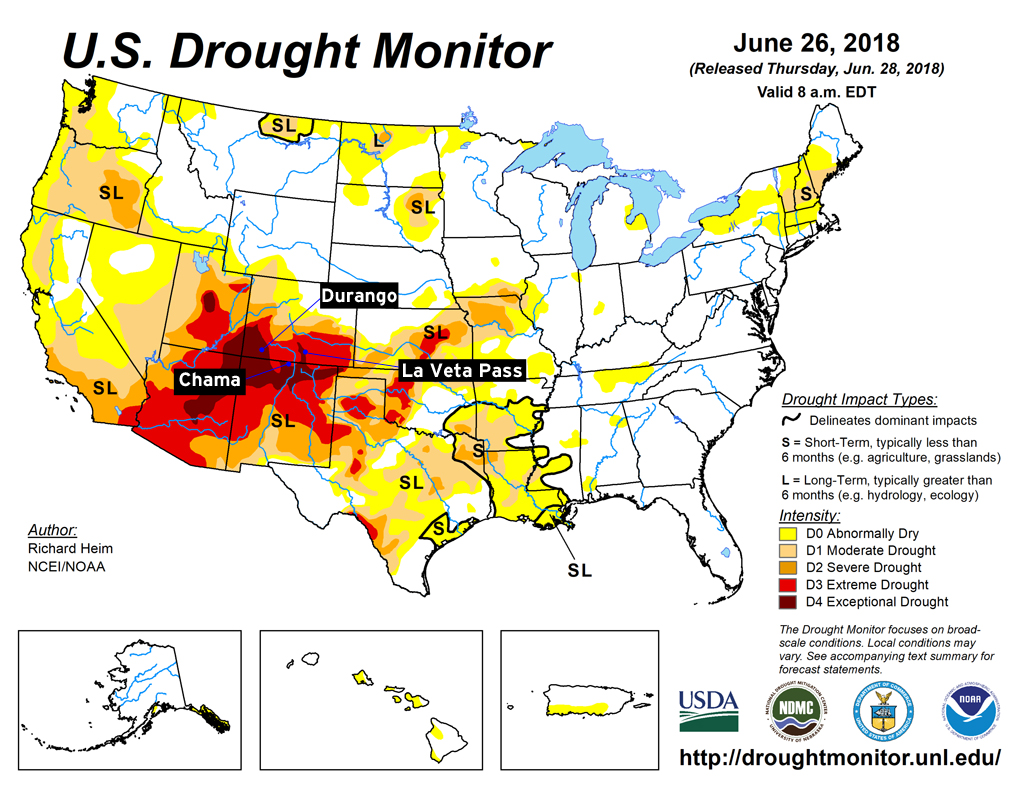 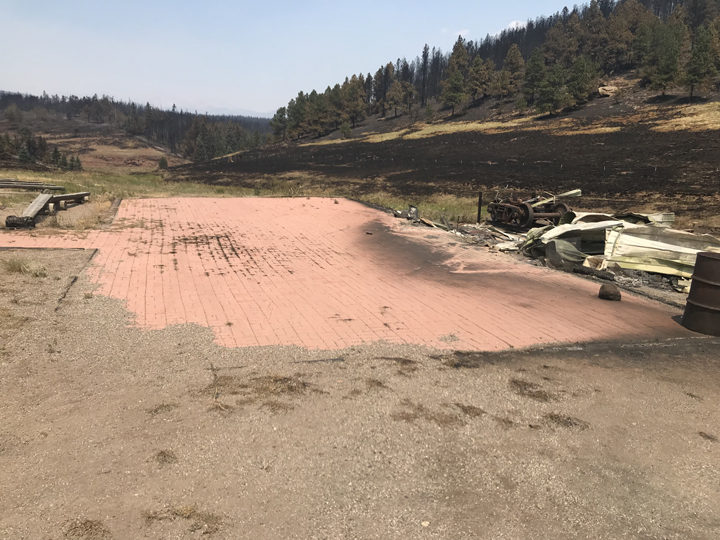 Listed in 2014 by USA Today as one of the Top 10 outdoor concert venues in the U.S., the Spring Creek Fire destroyed the stage at the Fir Summit concert venue. A GoFundMe.com page has been started for donations to help the reconstruction effort.
Ed Ellis
DURANGO, Colo. — Three wildfires in southern Colorado have consumed more than 100,000 acres since the beginning of June affecting the service of tourist and freight railroads alike. U.S. Drought Monitor reports much of Colorado has experienced drought this year, with the southern and western counties suffering the worst, making the area a prime breeding ground for wildfires.

The most recent wildfire, called the Spring Creek Fire, started on June 27 just east of Fort Garland, Colo. It has since ravaged 95,000 acres in Costilla and Huerfano counties. At 5 percent containment and with unfavorable weather in the forecast, the fire doesn’t look like to be doused anytime soon. A man suspected of starting the fire was arrested July 2 and is under investigation.

Iowa Pacific runs the 150-mile-long San Luis & Rio Grande freight line and the Rio Grande Scenic excursion railroad, both of which pass through the heart of the Spring Creek Fire devastation. According to Iowa Pacific’s president, Ed Ellis, the railroad lost a bridge and a freight car at Sierra, Colo., about 40 miles east of Alamosa, and the entire stage at its Fir-Summit music venue.

“Our first priority is to get the railroad back in service and get cars moving,” Ellis tells Trains News Wire. Contractors are already on-site replacing the bridge temporarily with fill and a culvert. He hopes to have service up by Friday.

While the total damages to the company’s assets haven’t yet been tallied, Ellis estimates the cost to be around $1 million. While insured, Iowa Pacific will have to overcome a substantial deductible. Rio Grande started a crowdfunding page on GoFundMe.com to solicit donations and raise funds to help rebuild the Fir Concert Stage. More than 300 concerts have been performed at Fir during the past 10 years and has become a major attraction for tourists.

Ellis points out that as fierce as the fire has been, the damage has been limited to property loss.

“With all the evacuations, homes destroyed, and firefighters on the ground, we’re just happy no one has been hurt,” Ellis said.

The Durango & Silverton Narrow Gauge tourist railroad, based in Durango, suspended steam operations until July 12. It had previously hoped to resume operations on July 4. In lieu of steam-powered tours, the railroad has been operating limited distance excursions with diesel locomotives since June 22. According to a D&SNGRR spokesperson, the Burro Fire has not had an impact on operations, and the company does not expect it to.

One hundred fifty miles east of Durango, the Cumbres & Toltec Scenic Railroad, owned jointly by the Colorado and New Mexico, runs from Antonito, Colo., to Chama, N.M. While not in immediate danger from the 416 or Spring Creek fires, the Cumbres & Toltec is a popular coal-burning steam tourist railroad. As such, it has measures in place to mitigate the possibility of hot ash starting a wildfire.

According to documentation supplied by Cumbres & Toltec, all employees must complete wildfire training with the New Mexico State Forestry Division. Two fire patrol cars equipped with a water tank and pump follow each departing train for the length of the journey, similar to what was used on the Durango & Silverton. Additionally, the company owns and operates its own firetruck and tanker, engages in regular brush clearing along the line sides, and maintains an 8-foot ballast profile on both sides of the tracks. Besides the occasional small fire quickly extinguished that is common with coal-fired steam railroads, C&TS says it has never had a major fire on its line.

As for business, John Bush, C&TS president and general manager, says the company is doing well, despite the challenges the fires pose, particularly Spring Creek.

“Ridership is up fairly significantly for June,” he said. “We’ve been running steam trains every day.”

Bush says that the fire situation up to now for the C&TS is well under control.

“We are exceedingly proud of the performance of all our people,” he said.