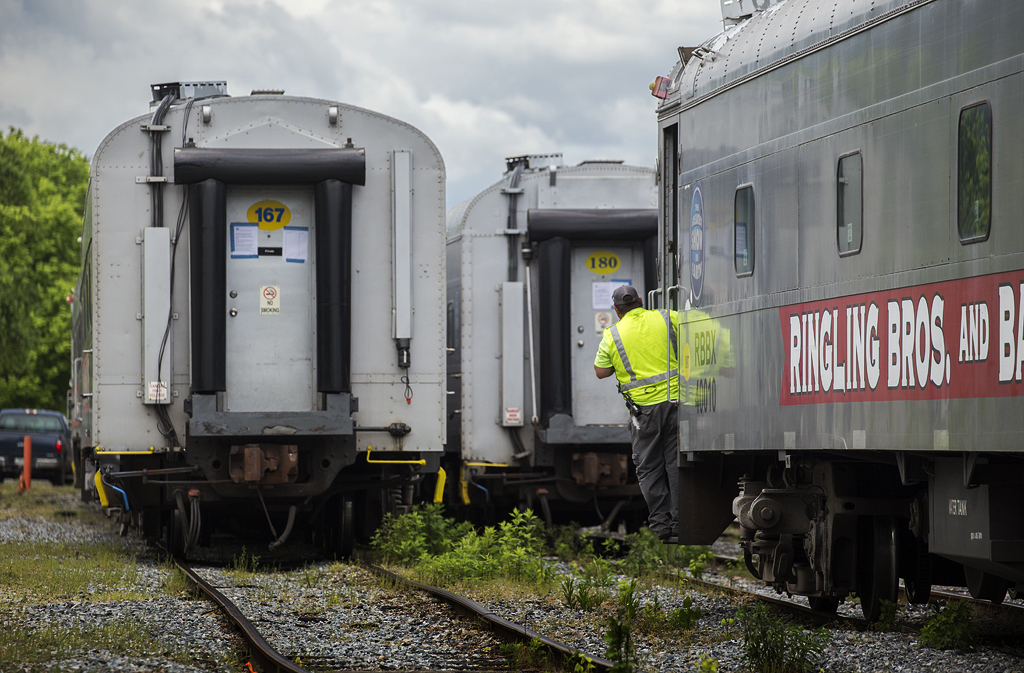 Kanawha River Railroad crews switch out the entire consist of the Ringling Bros. and Barnum & Bailey Blue Unit circus train near Charleston, W.Va., in May 2017. The cars were being switched for disposition and setoff for when the final shows ended in Uniondale, N.Y., later that month.
Chase Gunnoe
NEWARK, N.J. – Passenger car owners and tourist train operators are looking forward to getting their hands on circus train history as buyers of the Ringling Bros. and Barnum & Bailey circus train fleet.

Circus train cars are deadheading to their new homes via freight routes served by Class I, shortline, regional railroads. The cars have been accumulating at Conrail’s Oak Island Yard in Newark since “The Greatest Show on Earth” finished its last performance in Uniondale, N.Y., on Long Island in late May.

Many of the cars will join existing passenger car fleets at tourist railroads for use on dinner trains and other excursions, while other cars will head for private owners who plan to restore the cars to their original design for use in charter service and Amtrak-certified excursions. In other cases, passenger rail operators will scoop up an inventory of hard-to-find components to build their inventory of replacement parts.

Trains News Wire recently reached out to some of owners who won the railcars and passenger car parts at a Feld Entertainment-managed auction earlier this spring.

Borden Black, owner of the Georgia Railroad Dearing business car, purchased RBBX No. 41307 a former Blue Unit car that was originally built in 1949 for the Pennsylvania Railroad as 21-roomette sleeper Lewistown Inn. The Tuscan Red car would later be converted to a 64-seat coach and 12-seat lounge for the New York World’s Fair in 1964-1965. It would run in corridor service through the Penn Central era before being sold to Ringling in 1991.

Black has plans to remodel the car to a luxurious sleeper for overnight passenger trips. “We will be configuring [the car] as a five bedroom luxury sleeper with queen-sized beds and all private baths,” Black says.

The car is headed for Huntington, W.Va., from Oak Island where members from the Collis P. Huntington Railroad Historical Society, an affiliate of the National Railway Historical Society and the sponsor of the New River Train, will work with Black and other passenger car experts to redesign the car for private charter use.

Black’s car will travel to Huntington dead-in-tow on CSX freight trains from the northeast to Richmond, Va., and west on the ex-Chesapeake & Ohio main line into West Virginia.

In nearby Cincinnati, Brian Collins, president of the Cincinnati Railroad Co., and operator of the Cincinnati Dinner Train, plans to restore RBBX No. 401406, a former Southern Pacific car, back to its original purpose as a 44-seat coach.

“We will gut [the car] and restore the eleven windows on each side and then either convert it back to the original 44-seat coach from Southern Pacific, or we may gut it and make it into an open bar car for use on the dinner train,” Collins says. “We want to get it here and see what we are getting into before deciding the course of action.”

Kevin Moore, a Pittsburgh-area dentist and the owner of former American Orient Express sleeper car Berlin, is working with a colleague of his in nearby DuBois, Pa., on restoring two circus cars – RBBX Nos. 40007 and 42017.

Moore says the cars are headed to the Doolittle station complex in DuBois where Dr. Jeff Rice, an oral surgeon and railway preservationist, will restore the cars for overnight accommodations.

“Jeff plans to decorate the cars with [circus] memorabilia, and is searching for a ringmaster’s costume for the 42017 ringmaster’s car,” Moore says.

Other entities, such as the North Carolina Department of Transportation, are acquiring some of the circus’ railcar part inventory to serve as replacement parts for their state-managed passenger rail service connecting Raleigh, N.C., with Charlotte, N.C.

North Carolina Department of Transportation Rail Division Director Paul Worley says this was one of the last opportunities the state will have to purchase used parts that are compatible with the agency’s 19 passenger cars.

“Ringling is the last major owner of these types of parts… Many of these parts have not been manufactured for over 30 years, or if you can still get someone make them the lead times are significant and the costs tremendous,” Worley says. The agency was able to acquire 24 “like new” wheel sets, three truck frame sets, a generator, and 48 used Timken-built roller bearing boxes.

“We estimate we have saved hundreds of thousands of dollars versus if we went through a typical multiple vendor procurement process for all of the used parts,” he adds.

In addition to purchasing railcar parts, NCDOT is also working with the Carolina Coastal Railway on the temporary storage of nine circus train cars. The short line intends to store the cars on a section of the Nash County Railroad that NCDOT owns and leases to the Carolina Coastal.

“NCDOT is considering the possibility of purchasing some of the cars – as we have funding programmed for additional coaches to accommodate the fifth frequency of the Piedmont,” says Worley.

Eight of the nine passenger cars in storage are former Union Pacific coaches that are sister cars to NCDOT’s seven 1964 St. Louis Car Co. 56-seat coaches. The ninth car is a former UP baggage car that was built in 1962 by the same company. Worley says the state is considering purchasing the baggage car to use as a temporary shop at the new locomotive and railcar maintenance facility being built in Charlotte.

Worley says that the state’s interest in rebuilt equipment versus new equipment is that the new car market is not conducive to small orders like NCDOT needs.

As of June 5, several circus cars were already on their way to private owners. A couple of cars were spotted near Rocky Mount, N.C., waiting to be picked up by CSX trains and other cars were headed north from Oak Island.