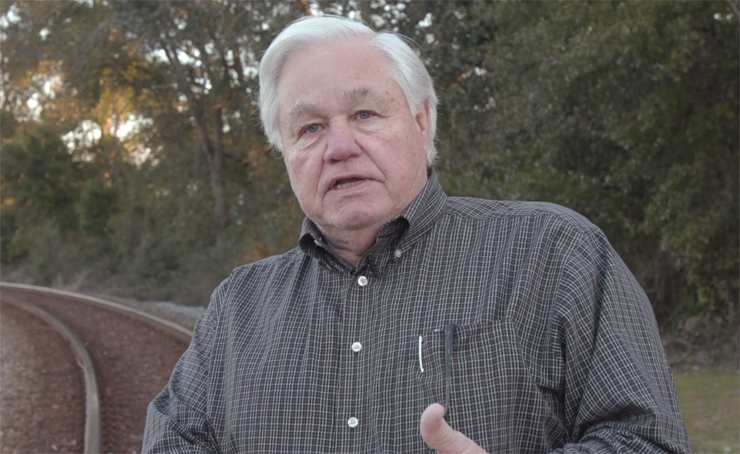 A screenshot from a video on the North Charleston, S.C., city government Facebook page shows Mayor Keith Summey standing in the middle of a railroad track to harshly criticize Norfolk Southern over daytime work that blocked a busy grade crossing.
North Charleston city government Facebook page
NORTH CHARLESTON, S.C. — North Charleston’s mayor has taken to social media to lash out at Norfolk Southern, posting a video complaining about maintenance work that blocked a key grade crossing, while a state legislator from the community has introduced a bill that would substantially increase the penalties for blocked grade crossings.

In the video on the city government’s Facebook page, Mayor Keith Summey — standing the middle of a railroad track — says, “I couldn’t be more upset about Norfolk Southern’s attitude toward people in the greater Charleston Area.” He questions why NS can’t do grade-crossing work at night, and says, “How about being a citizen of our community instead of someone who thinks they can run in on a rail and run over us.”

A Norfolk Southern spokesmwan told the Post and Courier newspaper that the railroad apologized for the delays but said the work was done during the day for safety reasons. She also said the railroad has reached out to the mayor to discuss the project.

Meanwhile, state legislator Marvin Pendarvis (D-North Charleston) has introduced a bill that would fine railroads for blocking a crossing with anything other than a continuously moving train for more than 5 minutes. Fines, currently $5 to $20, would be increased to $5,000 for each blocked lane, or $10,000 between 7:30 a.m. and 5:30 p.m.