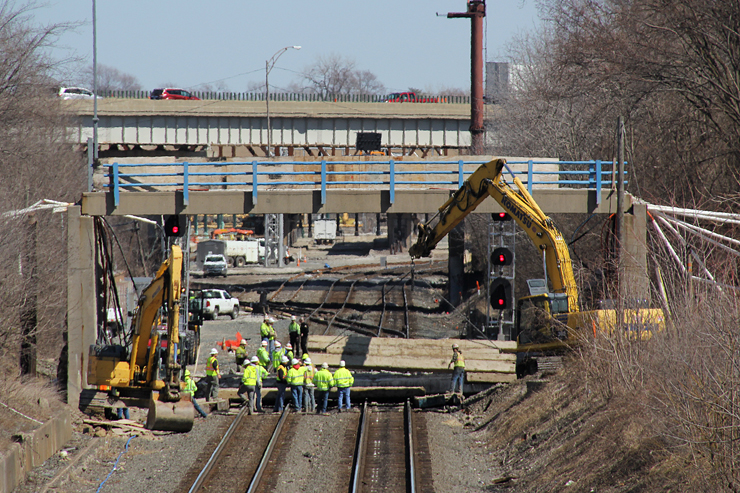 Crews work to clear the Norfolk Southern main line in Toledo after a bridge collapsed onto the tracks on Wednesday.
Michael D. Harding

TOLEDO, Ohio — A bridge collapsed onto a Norfolk Southern main line in Toledo on Wednesday, temporarily shutting down train traffic on the route to Chicago.

The Maumee Avenue bridge, undergoing repair work, collapsed about 2 p.m., dropping large slabs of concrete onto the tracks. No injuries were reported, the Toledo Blade reports.

Trains were operating past the bridge site by Wednesday evening, the paper reported.

The street was closed in November to begin repair work, and was scheduled to be closed for 270 days as part of a $3.9 million project which also includes rebuilding segment of Maumee and Emerald avenues. No information was immediately available on effect on the project schedule.

State Rep. Michael Sheehy (D-Toledo) told the Blade he was grateful there were no injuries, saying the collapse could have been “a tragedy of monumental proportions had it fallen on a train laden with hazardous materials.”