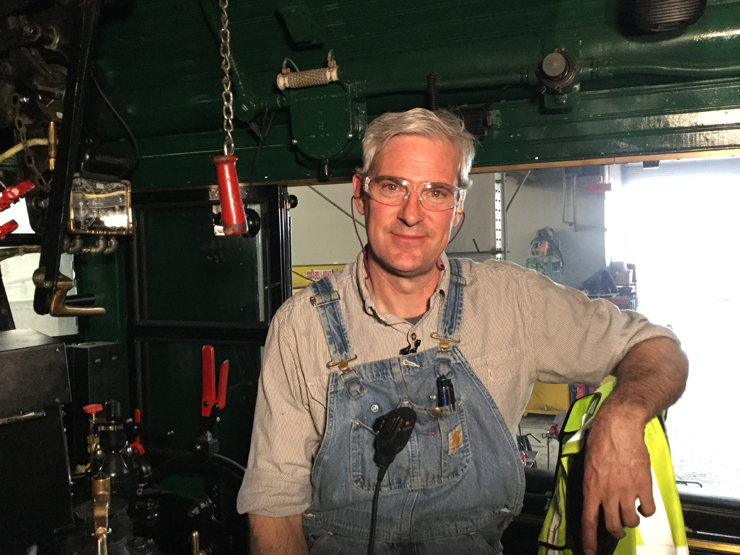 Union Pacific Senior Manager of Heritage Operations Ed Dickens in the cab of UP Big Boy 4-8-8-4 No. 4014 in Cheyenne, Wyo., on Friday, May 3.
TRAINS: Steve Sweeney 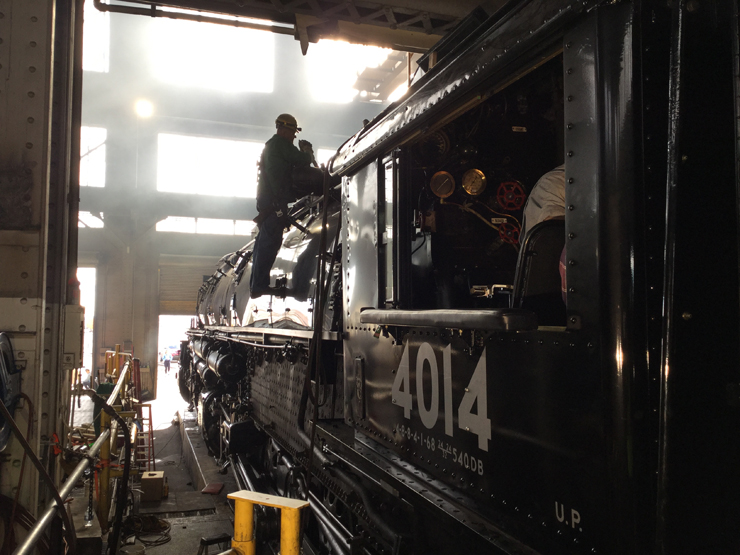 But for Union Pacific steam boss Ed Dickens, the rhythmic sound that the 4-8-8-4 steam locomotive’s valves, rods, and exhaust will make transcends its machinery.

It’s those sounds he says he’ll look forward to most.

All the sights — and sounds — are the culmination of more than five years of planning and efforts with a mainline run from Cheyenne to Laramie and Rawlins, Wyo, Saturday.

As Union Pacific Senior Manager of Heritage Operations, Dickens oversaw the selection and transport of Union Pacific Big Boy No. 4014 from Pomona, Calif., in 2014. Once safely in the railroad’s steam shops in Cheyenne, Dickens and the UP steam crew completely re-built the locomotive in time for the 150th anniversary of the completion of the Transcontinental Railroad at Promontory, Utah, on May 10. The Big Boy and sister locomotive, 4-8-4 No. 844 will participate in a commemorative ceremony May 9 in Ogden, Utah.

Even though UP’s steam crews have completed the goal, the enormity of restoring a 600-ton, 132-foot long locomotive to operating condition is only just beginning to set in with the railroaders.

“There’s been a lot of intensity in the organization for a long time. It all zeroes right in on today tomorrow and the following days leading up to the big May 9 event in Ogden,” Dickens says. “It’s really not sinking in yet.”

He says that sometimes, late at night, when most of their day’s work is finished, “We just marvel at the size of the locomotive and it kind of sinks in then. Just lean out the window and look out at the running board and it will hit you how big this locomotive really is.”

That big of a locomotive also needs time to operate before it begins to operate smoothly.

A May 2 test run from Cheyenne to Greeley, Colo., and back involved running the locomotive slowly and stopping often to check bearings and make minor repairs.

Dickens says the locomotive ran about 70 miles but that he would like to have gotten about 500 miles of running time in — in a perfect world.

More running time would help loosen stiff connections, give the crews time to fine- tune fuel and water systems, and even let them find and tighten bolts that may seem fine but quickly loosened in the presence of 400 degrees Fahrenheit heat and steam pressure — all small details that may affect safety.

“So, it’s with the seriousness of everything that we face that the pressures of making sure that we’ve done it right and we’re going to get it right,” he says. “’Cause we don’t get a second chance.”

Union Pacific and Wyoming officials christened Big Boy No. 4014 in a special ceremony outside of the Cheyenne Depot Museum Saturday morning, with the locomotive departing soon after for its first official runs since the 1950s.

Trains will be live streaming No. 4014’s trip on the Trains Facebook page.

Articles and video of the adventures will appear on our Big Boy page.