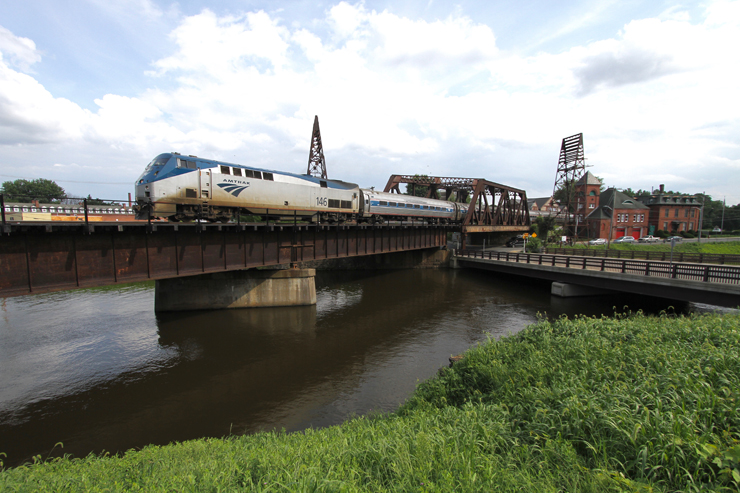 Amtrak’s northbound Vermonter crosses a canal in Holyoke, Mass., on Aug. 30, 2018. Plans for additional service will increase frequency on this corridor from one to three round trips daily.
Scott A. Hartley

SPRINGFIELD, Mass. — The upgrade of former Boston & Maine Railroad trackage that allowed the Vermonter to be rerouted via Greenfield, Mass., will begin paying additional dividends this summer, with two more Amtrak round trips to Greenfield.

The new service is made possible by a $73-million, stimulus-funded infrastructure project that allows the Vermonter to serve Massachusetts’ “Knowledge Corridor” communities of Holyoke, Northampton, and Greenfield. That route entered service in August 2015 on former Pan Am Railways trackage. It is far more direct than the prior path on CSX Transportation and New England Central via Palmer and Amherst, Mass. [See “Rebuilding the ‘Vermonter’ route,” “Passenger,” Trains, February 2015.]

MassLive.com reports that Pioneer Valley Planning Commissioner Timothy W. Brennan confirmed with Massachusetts DOT officials that the service might start as early June, pending completion of high-level Platform C at Springfield Union Station and tie replacement and bridge repairs on the route. A firm start date and schedules have not been finalized, but Brennan says there will be both morning and afternoon round trips.

A fare structure hasn’t been set either, although Brennan was told by state officials that the fares will not be subsidized the way Connecticut is on CTRail and Amtrak’s joint New Haven-Springfield operation. The St. Albans, Vt. ,to Washington, D.C. Vermonter’s cheapest Greenfield-Springfield “walk-up” one-way fare is $18; a two-week-in-advance fare is $14, but neither of these might work for daily commuters the route hopes to attract. Because the fares are yield-managed, those prices could fluctuate depending upon demand. Though the Vermonter operates through the New Haven-Springfield corridor, the Connecticut-sponsored flat $12 adult fares between those cities are not honored on it.

Additional trains were always part of Massachusetts’ plan to re-establish stations at Holyoke, Northampton, and Greenfield along with a $1 million operating grant. The new stations’ tiny platforms skirted the Federal Railroad Administration’s full length (of train) accessibility preferences but do offer level boarding.

However, Massachusetts’ commitment is only for a two-year pilot project. It isn’t clear what criteria will be used to determine whether the operation is deemed “a success.”

The state purchased the tracks from Pan Am Railways for $17 million in 2015, paving the way for already-planned capacity-expanding trackwork and signaling. Pan Am retains trackage rights.