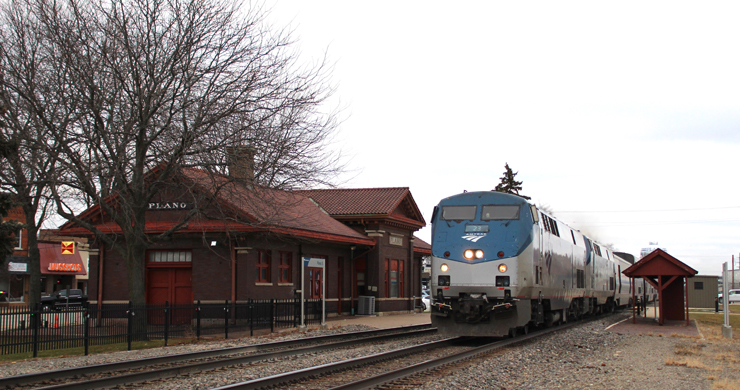 PLANO, Ill. — The opportunity has begun for the public to inspect and consider aspects of the proposed extension of Metra commuter rail service into Kendall County, Ill. — a long-discussed concept facing an uphill climb to become reality.

The proposal could add up to five station and 17.5 miles to Metra’s BNSF line by extending the route west and south of its current terminus in Aurora, Ill., along BNSF’s ex-Burlington/Burlington Northern Mendota Subdivision.

On Monday, the Plano Community Library hosted the first of two project open houses, featuring a recorded presentation and displays, and the chance to talk with representatives of Metra and the consulting firm conducting the official study of the proposal. The second open house will be held today (Dec. 3) at the Oswego, Ill, Village Hall.

The study, paid for with federal funds earmarked in the mid-2000s, will consider possible station sites in Montgomery, Oswego, Yorkville, Plano, and Sandwich. It will also weigh three options for train frequencies, project ridership, conduct an environmental study — and put a price tag on the proposal. That is slated to be complete by summer 2020.

Advancing the study beyond that stage involves so many variables that Metra officials won’t even offer a best-case scenario for a possible start to such service. The process will have to clear at least four hurdles:

— The area has to decide if it wants to pay the price for the service. The latest state budget sets aside $100 million for capital costs of the extension [see “Illinois passes budget with funds for transit, commuter, intercity rail,” Trains News Wire, June 2, 2019]. But the early estimate is that those costs will reach $400 million to $500 million. After that, there will be annual operating costs of at least $5 million.

While Monday’s turnout certainly indicated interest in the proposal, the ultimate price tag will weigh heavily on the degree of support it receives.

“I think generally, our folks are for the project,” Plano Mayor Bob Hausler tells Trains News Wire. “We haven’t seen any of the real numbers, and I think the financing and the actual dollars that would be involved to bring Metra to Plano would be a huge factor.”

On the other hand, the financial aspect of Metra service is not merely a matter of expenses.

“Each individual municipality … is going to have to spend money to keep it going,” says Jim Teckenbrock, City of Sandwich executive director. “That’s what some people didn’t realize. But it will bring other retail stuff along with it, other development around it. Our property has a lot of room. Plus it’s right across the street from the [county] fairgrounds. People can use it for the fair, and the fairgrounds has so many different activities it’s almost used yearround.”

— If the area is willing to pay that price, it must determine how. Kendall County is not part of the six-county Regional Transportation Authority, which funds Metra and other Chicago-area transit through taxes including, but not limited to, a 0.75% sales tax. It could attempt to join the RTA or find another revenue stream.

— The RTA and Metra must agree to provide the service. David Kralik, Metra’s head of long-range planning, says the Metra board has taken no position on the concept. But at least one of the RTA’s member counties has already voiced strong objections, with Kane County Board Chairman Chirs Lauzen pushing for an extension to Sugar Grove, on a different BNSF line, the Aurora Subdivision. [See “Two Illinois counties are rivals for Metra extension that’s unlikely to happen,” Trains News Wire, June 14, 2019.]

— And BNSF Railway must agree to allow building and operation of the extension.

State legislation may also be required, according to study documents.

Those are the long-term issues. In the short term, there are nine station sites to be considered in the five communities. Montgomery, Oswego, and Sandwich each have offered one station site; Plano has two options, and Yorkville is offering four. Montgomery and Oswego do not have sites suitable for the required end-of-the-line yard and maintenance facilities, which make Yorkville, Plano, and Sandwich the potential endpoints.

The study will also consider whether weekday service would include two, four, or six round trips. A second round of open-house meetings in spring 2020 will present the preferred options resulting from the study.