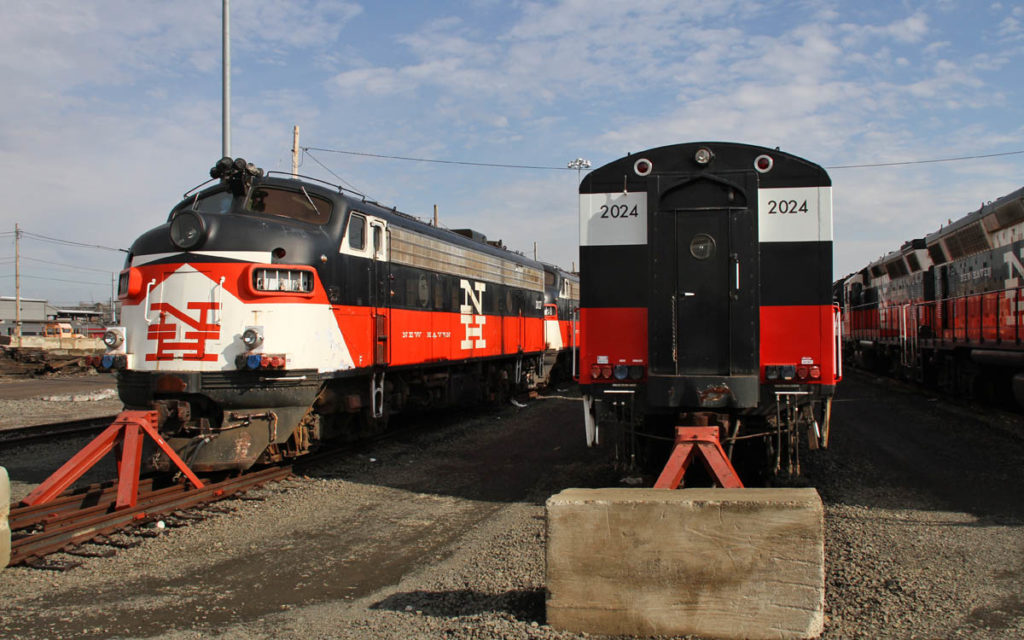 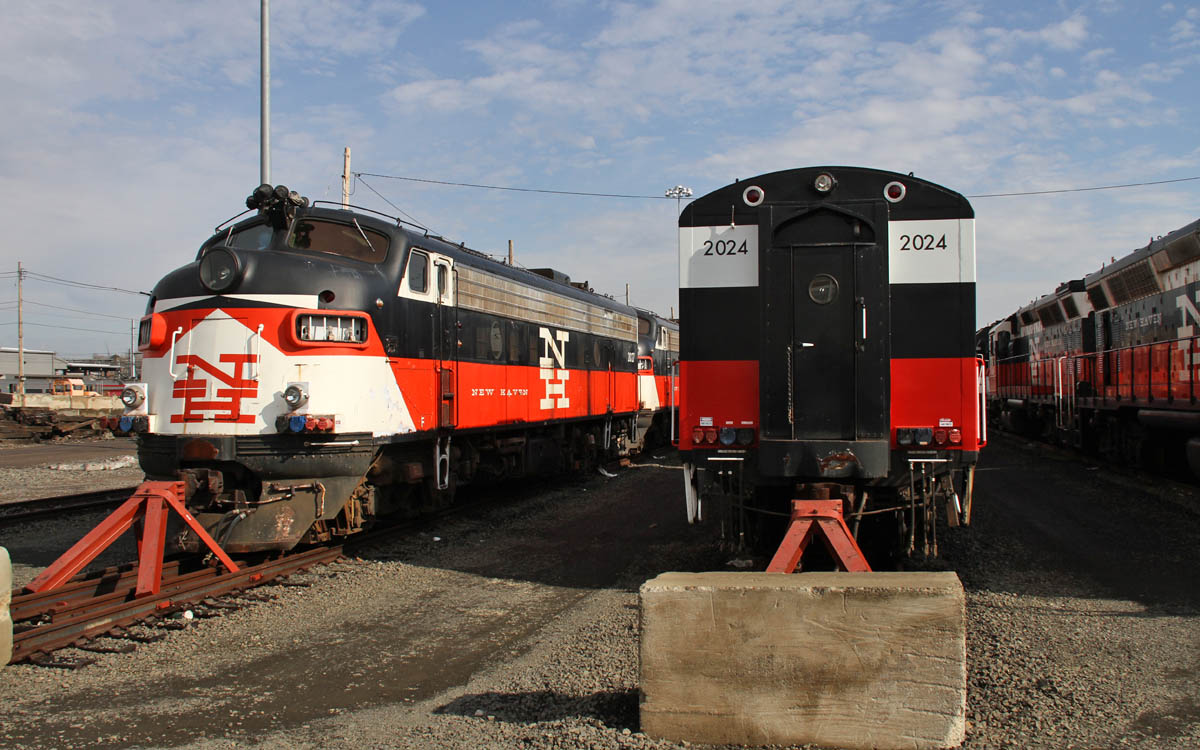 The six FL9s were part of the New York, New Haven & Hartford’s onetime fleet of 60 dual-mode electric/diesel-electric locomotives, built between 1956 and 1960. EMD designed and built the units for use as diesels in most locations, but having the capability to operate as electric locomotives in New York City’s rail tunnels to Grand Central Terminal and Pennsylvania Station. The New Haven was the only railroad to purchase the model, but its FL9s subsequently worked for Penn Central, Conrail, Metro-North, and Amtrak, and later for several tourist railroads and museums.

The State of Connecticut at one time owned 10 FL9s, and took the unusual step of repainting all of them in their original red, white, and black New Haven “McGinnis” color scheme. All were part of the Nutmeg State’s contribution to a pool with Metro-North for commuter services in Connecticut and New York. Between 1995 and 2001, a fleet of 31 General Electric dual-mode P32AC-DM units replaced the FL9s on Metro-North’s mainline commuter trains on a 1-for-2 basis. A dozen Brookville Equipment BL20GH road-switchers delivered to Metro-North and CTDOT in 2008 bumped the last FL9s off branchline services. Connecticut’s last six FL9s, all rebuilt by Morrison-Knudsen in 1993-1994, were placed in storage in New Haven, Conn., in 2009.

Earlier this year, the state posted the FL9s on an auction list, and the winning bidders were notified in August. Sale prices ranged from $51,100 to $93,100 per unit, according to a Department of Transportation spokesman. Three of the six stored cab units already are on their way to their new homes.

Boston Surface Railroad Co., which purchased No. 2027 (built as New Haven No. 2015 in 1957), has proposed operating commuter service over the Providence & Worcester Railroad between the railroad’s namesake cities in Rhode Island and Massachusetts. The company’s CEO, Vincent Bono, hopes to acquire additional FL9s or other cab units to power Boston Surface’s planned trains. The locomotive will be moved to Davisville, R.I., for mechanical work by the Seaview Transportation Company, Bono tells Trains News Wire.

Massachusetts Coastal Railroad, a southeastern Massachusetts freight operation, purchased two Connecticut FL9s, No. 2011 (originally NH No. 2038, built in 1960) and No. 2026 (NH No. 2007, built 1957). Chris Podgurski, president and chief operating officer, says the units will be assigned to the company’s Cape Cod Central passenger operation. Podgurski is pleased with the two FL9s the railroad has acquired, commenting on their good wheel condition and their Caterpillar head end power units. He remarked that FL9s will be returning to territory that they once covered while working for the New Haven.

Heading to the Berkshire Scenic Railway Museum is Connecticut DOT FL9 No. 2024, which was built as New Haven No. 2058 in 1960, and was the second-to-last cab unit manufactured by EMD. BSRM teamed up with Webb Rail LLC of Fishkill, N.Y., owner of former New York Central observation car Babbling Brook, to acquire the historic locomotive. The FL9 is en route to BSRM’s station and museum in Lenox, Mass. Although the organization already is referring to the unit as No. 2058, museum officials tell News Wire that no decision has been made to restore its original number in the near future.

Grapevine Vintage Railroad, which acquired FL9 No. 2014 (originally New Haven No. 2041, built in 1960) and No. 2016 (NH No. 2044, built in 1960), operates a variety of excursion trains over a 26-mile former Cotton Belt line near Fort Worth. Railroad president P.W. McCallum says that the pair will receive the “cabernet and champagne” colors already worn by the Grapevine’s passenger car fleet. The streamlined FL9s will operate in pull-pull fashion, with one at each end of the train, to facilitate direction changes at the ends of the line. Grapevine expects its1896 former Southern Pacific 4-6-0 No. 2248, as well as the two FL9s, to be in service in 2019, McCallum tells News Wire.

Just four FL9s are in service in Connecticut, New Jersey, and Quebec. Fans of these popular locomotives are hoping that six more will be added to the active list.