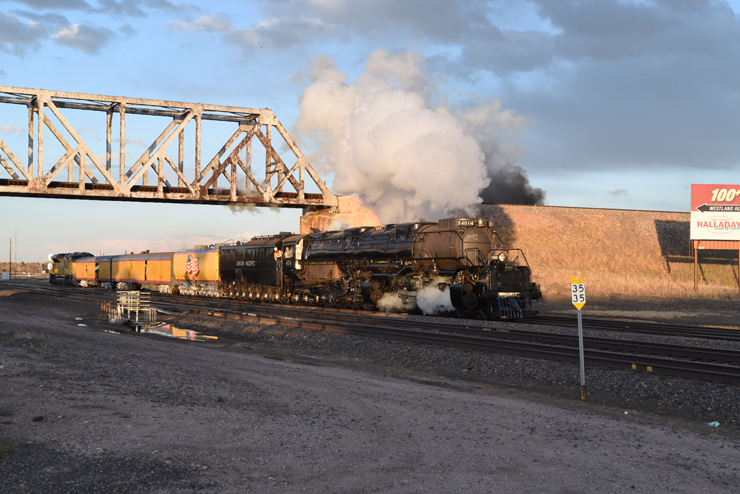 UP Big Boy No. 4014 departs Cheyenne, Wyo., just before sunset on Thursday on its first test run.
TRAINS: Jim Wrinn 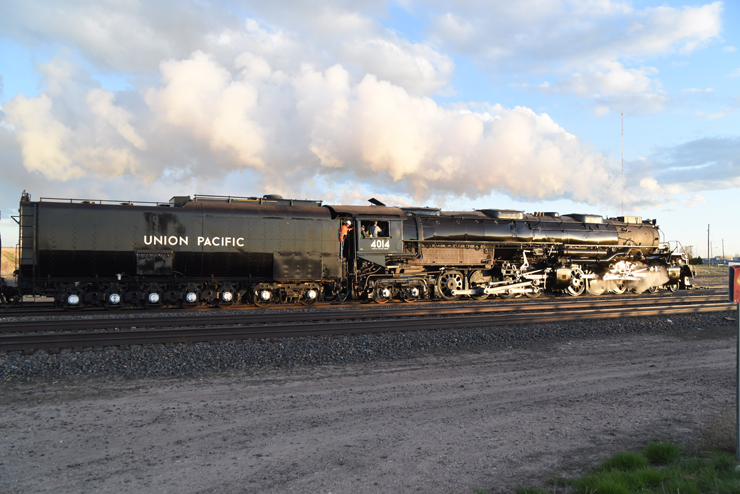 Why, yes, it is big: UP’s newly restored Big Boy heads out of Cheyenne on Thursday. Another test run is possible today.
TRAINS: Jim Wrinn
CHEYENNE, Wyo. – Running into a setting sun, newly reborn Union Pacific Big Boy No. 4014 rolled gingerly onto the main line Thursday evening, launching a new era of the biggest of the big for the one American Class I railroad that remains dedicated to using its history and its steam power for public relations.
With the words “Big Boy” chalked on its smokebox door over a “V” for victory as it was in 1941 on the first Big Boy, No. 4014 left Cheyenne with a water car and two tool cars in tow, bound for Greeley, Colo. A modern diesel trailed in dynamic brake mode to simulate a load.
The crew stopped several times to inspect the running gear and continued to Nunn, Colo., before returning to the steam shop early this morning. Another test run today was not out of the question.
The locomotive is set for a christening event Saturday morning before heading west with 4-8-4 No. 844, bound for Ogden, Utah, and the 150th anniversary of the Golden Spike.

Trains will live stream as much of the trip as possible on its Facebook page, thanks to sponsors Nevada Northern Railway Museum and Railfan Depot.