Home / News & Reviews / News Wire / Under its own power, Big Boy moves outside of shop NEWSWIRE 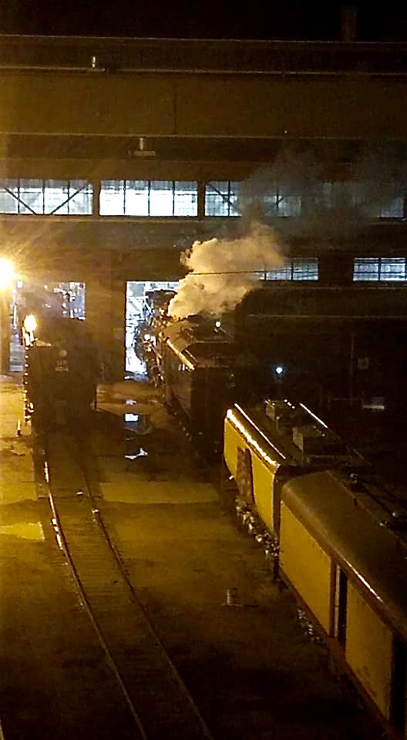 Union Pacific Big Boy No. 4014 moved under its own power for the first time on Wednesday night, backing out of the Cheyenne shop. A test run could come today.
Michael Pannell
CHEYENNE, Wyo. — Big Boy is stretching his legs.
On Wednesday night, Union Pacific 4-8-8-4 No. 4014 backed out of the Back Shop where it was restored, the first time a Big Boy locomotive has moved under its own power since July 1959. A consist of a water and tool cars was at hand and there was talk of a quick test run to nearby Speer, Wyo., but that did not occur. A test run today, however, is a possibility. Whether that is to the wye at Speer, or to Greeley, Colo., a traditional break-in run destination, is not known.
The locomotive is nearing the completion of an almost three-year restoration that began in 2016 after 4-8-4 No. 844 was overhauled and returned to service in July of that year. UP had acquired the Big Boy in 2013 but didn’t launch work until after No. 844’s overhaul and a general upgrade of the steam shop.

The Big Boy debuts Saturday in a doubleheader with No. 844 on the first of a five-day sojourn from Cheyenne to Ogden. Rawlins, Wyo., will be the destination of the first day’s run.

17 thoughts on “Under its own power, Big Boy moves outside of shop NEWSWIRE”