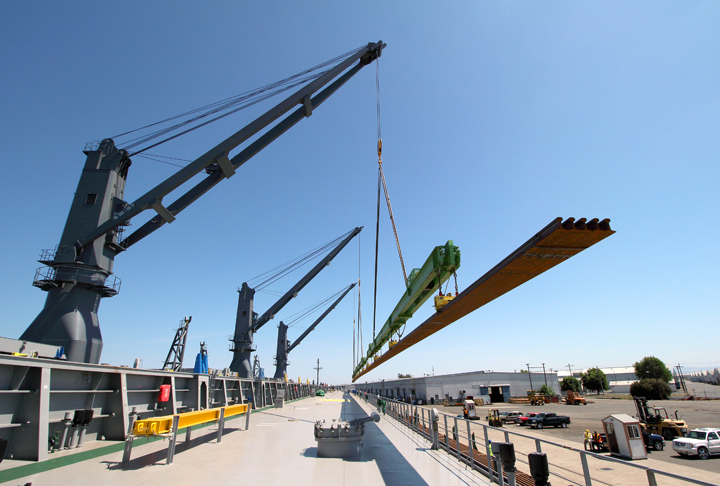 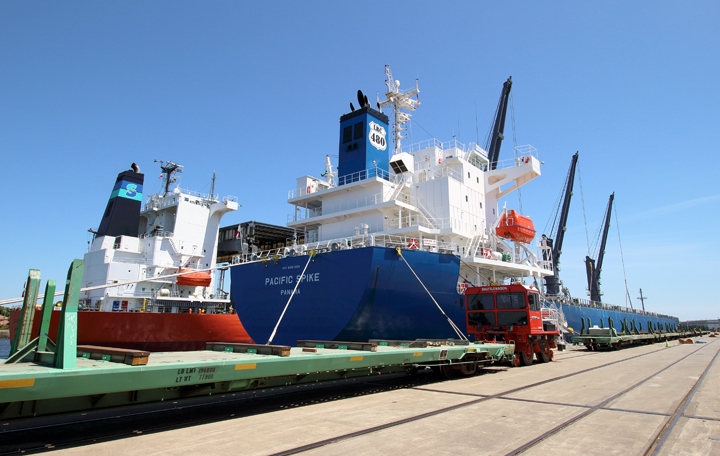 The Pacific Spike rail ship. This is the ship that was delayed for week in San Francisco Bay. It is unclear why the ship was delayed.
David Lustig
SACRAMENTO, Calif. — Union Pacific is facing increased costs of around $4 million for each shipload of special “long rail” it imports from Japan unless it obtains a waiver from the federal government.

One shipment that took two weeks to cross the Pacific Ocean was held up for nearly six more weeks in San Francisco Bay until the tariff was paid, although a Union Pacific representative says the delay did not slow down the railroad’s rail replacement work.

“Obviously, going forward this could potentially become an issue if we don’t get a shipment we’re supposed to get,” says Justin Jacobs, UP’s California-based media relations director.

The 623-foot cargo ship Pacific Spike, built specifically to carry long rail, entered the bay May 4 but remained there until June 13 and the tariff paid before it completed its voyage to the inland Port of Stockton. UP declined to state who paid the tariff.

“That’s covered under commercial terms that we have with our supplier that we don’t disclose publicly,” said UP’s Jeff DeGraff.

Both the U.S. Coast Guard and U.S. Customs and Border Protection denied that they were responsible for the Pacific Spike’s long wait in San Francisco Bay.

“Any delays while in San Francisco Bay would have been their own choice, for whatever reason,” CBP spokesman Gregory Moore says.

Moore also denied rumors in Stockton that the ship was in danger of being seized and its crew deported because of the time spent anchored near San Francisco.

“If anything, the crew’s approved shore passes may have expired due to the ship’s decision to delay in the bay,” he said. “That would mean the foreign crew were not allowed to leave the ship due to lack of documentation.”

Jacobs says the railroad filed March 29 for an exemption from the new 25-percent steel tariff but has yet to receive a response from the U.S. Department of Commerce’s Bureau of Industry and Security.

On June 20, Commerce Secretary Wilbur Ross announced the first group of 42 steel products, including steel for razor blades and wire, excluded from the tariff.

The announcement, which also denied 56 requests, said the products were from Japan, Sweden, Belgium, Germany and China.

“Exclusions generally are granted if there is no domestic availability and there are no overriding national security concerns with regard to the specific product,” Ross’ announcement reads.

Union Pacific has been importing 480-foot length rail from Nippon Steel and Sumitomo Metal’s Yawata works in Japan for 3½ years aboard the Pacific Spike. It sails with up to 20,000 metric tons of rail about six times a year through San Francisco Bay and then up the San Joaquin River to Stockton, Calif.

There the ship is unloaded and three long rails are welded into quarter-mile lengths, which are stored alongside UP’s dock spur for shipment when needed throughout the railroad’s system. Reducing welds makes them less susceptible to breaking and causing derailments, but rolling longer lengths introduces other complications that compromise strength.

When Union Pacific announced the beginning of the rail imports in 2015, it said Sumitomo had developed a means of manufacturing 480-foot rail with sufficient strength that domestic suppliers could not match, which is the basis for its tariff waiver filing.