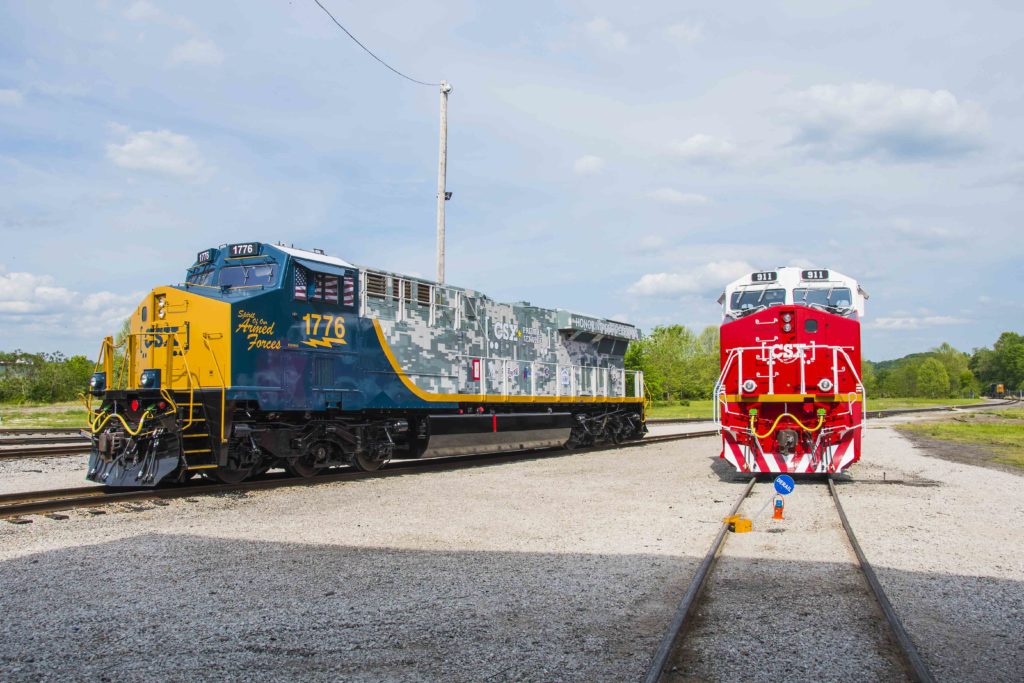 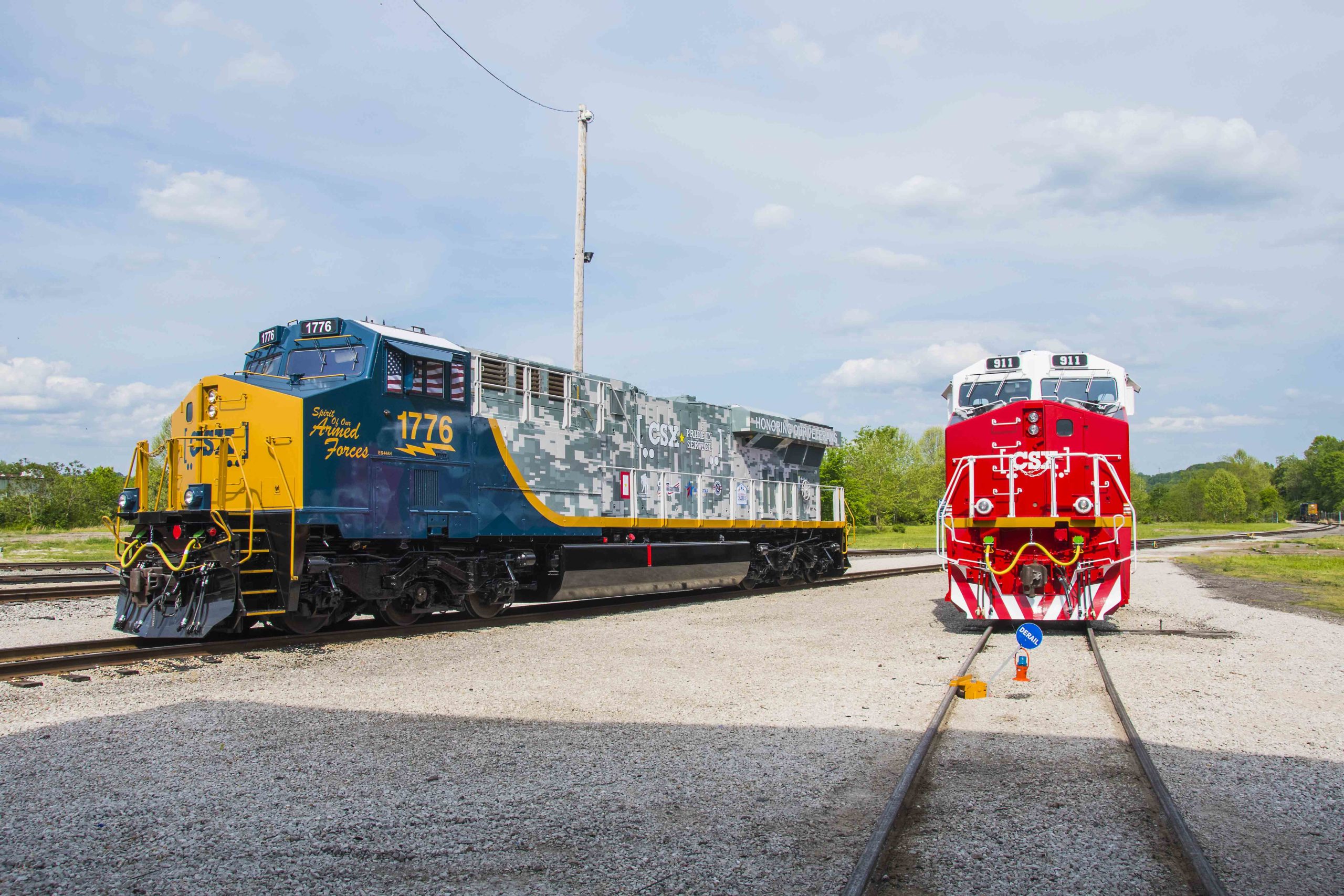 CSX commemorative units Nos. 1776 and 911 at Huntington, W.Va., on April 30, 2019.
Chris Anderson
HUNTINGTON, W.Va. — When specially-painted CSX locomotives Nos. 1776 and 911 rolled out of the paint shop in Huntington on Tuesday, the big GE Evolution Series engines essentially ushered in a new era at the railroad, one which could see more unique paint schemes on the railroad’s network.

ES44AH locomotives No. 1776, dubbed “The Spirit of Our Armed Forces,” and No. 911, designated as “The Spirit of Our First Responders,” were unveiled Tuesday afternoon at the railroad’s Huntington Heavy Repair shops in West Virginia.

No. 1776, renumbered from No. 3112, wears a combination standard CSX scheme on its cab and a highly-detailed digital camouflage paint scheme on its long hood which adorns CSX’s new “Pride in Service” logo. The seals of the five armed services branches are spread across the rear of the engine’s radiators, and logos for several support organizations for veterans and veterans’ families also appear on the locomotive. A screen-printed American flag covers the side cab windows. No. 911 is the most pronounced departure from the standard blue-and-gold scheme. New red and white fire truck-inspired paint covers the locomotive from end to end. Decals replicating the shields of police, fire and EMS appear on the long hood, and on the rear of the radiator a Sept. 11, 2001-inspired decal declares “Never forget.” The number 343 is also stenciled on the long hood of the locomotive, recalling the number of firefighters killed in the World Trade Center in the Sept. 11 terror attacks. Screen prints showing a police officer, firefighter and EMS worker also cover the windows of the 911.

At the Huntington shops, the buzz was from those to whom the paint schemes pay tribute. Local police, fire and EMS personnel, as well as members of the U.S. Coast Guard, attended the locomotives’ roll out from the paint shop. Among them was Dawn Lanham, an employee at Huntington who also serves as an EMT. Lanham kept track of the progress on the 911 as the paint was applied over the past several weeks, and she was on-hand to watch it roll into the open.

“It’s exciting because you can relate to it,” she said. “I can’t wait for it to roll out onto the road where everyone can see it.”

CSX Director of Network Planning Eric Hendrickson said the idea for No. 1776 came about as he and CSX Chief Operating Officer Edmond Harris rode a special Union Pacific business train last fall pulled by UP No. 1943, which is painted to pay tribute to veterans.

“We talked about how neat it would be for us (CSX) to do a special locomotive for veterans,” Hendrickson said.

That conversation led to Harris giving the go-ahead to begin researching what it would take to execute the project. Hendrickson said he turned to graphic artist Tyler Hardin, who produced a half-dozen renders for consideration for the project, including the one ultimately selected. Hardin, who has previously worked with the railroad on other special paint scheme projects, said he was attempting to be “conservative” with the design for the 1776’s paint scheme, and he wanted it to maintain a “CSX-centric” livery.

“It has the corporate look on the front that kind of swooshes into the camo,” Hardin said.

As the 1776 project progressed, Hendrickson said, discussions began about a locomotive to recognize first responders. By happenstance, Hendrickson said, the last time he was in Huntington — February’s unveiling of a restored C&O caboose for Kentucky Steam Heritage Corp. — No. 911 was at the shops for wreck repair and paint. He said Harris gave the go-ahead for the 911 project. Hardin said his design for the 911 is centered upon American fire trucks, many of which feature a lightning stripe and safety striping, two of the most prominent details on No. 911. Hardin said his original design would have seen a paint scheme similar to No. 1776, but a more unique design was ultimately chosen. Both paint schemes left those in attendance Tuesday in awe.

“It doesn’t seem real,” Hendrickson said. “What I take pride in is seeing the employees smiling and taking pictures of them. The paint shop guys always go above and beyond on these projects.” Dozens of Huntington employees are U.S. military veterans and they came out to view the locomotives and pose for photos. “There’s a lot of pride in those locomotives,” Hendrickson said.

Hardin said the entire project went smoothly and he received nothing but support during his part in the project. “I feel like I won the lottery,” Hardin said. “Making people happy is worth its weight in gold. The project is more than just another project.”