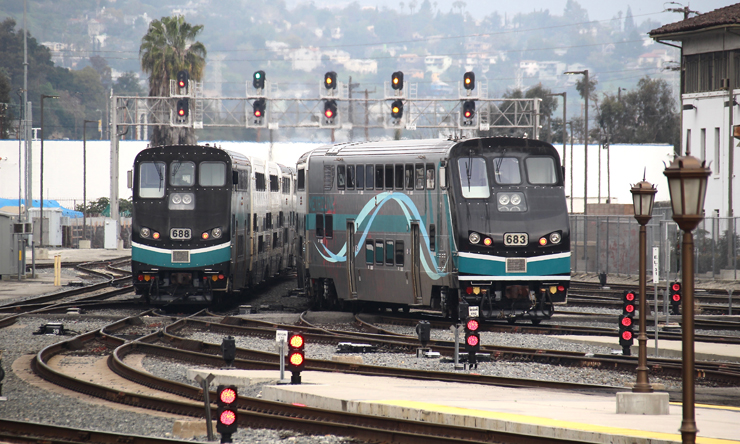 A pair of Metrolink trains depart from L.A. Union Station via the five-track station throat to be modernized as the first part of a project to make the station a pass-through, rather than stub-end, facility.
TRAINS: David Lassen 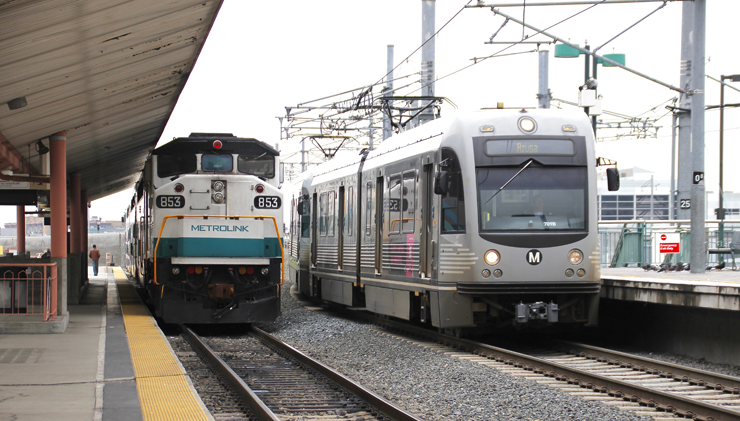 An LA Metro light rail train passes a waiting Metrolink train at LA Union Station. Right now, light rail trains are the only ones that run through the station.
TRAINS: David Lassen

LOS ANGELES — The long-planned and long-awaited addition of run-through tracks at Los Angeles Union Station, first envisioned in 2006, is moving closer to reality.

Handling more than 100,000 passengers a day, LAUS is the hub of Amtrak’s Pacific Surfliner service and Metrolink’s commuter railroad system. A stub-end terminal since it opened in 1939, through trains must enter a congested throat and reverse out to continue their runs, resulting in a minimum 20-minute dwell time in the station.

The “Link US” project will construct a two-track viaduct over U.S. Highway 101, extending station tracks to connect with the mainline near Amtrak’s 8th Street yard, enabling through operations from north to south. A total of $950 million is now in place to fund the first major portions of the project.

Six of seven Metrolink lines serve Union Station. The completion of run-through tracks in 2026, under the auspices of station owner LA Metro, will enable new opportunities for the commuter line.

“Having that run-through capability opens up a lot of additional service for us. It makes us a lot more efficient,” says Metrolink CEO Stephanie Wiggins in an exclusive interview with Trains News Wire.

First up is modernization of the five-track throat leading to Union Station, which Metrolink is managing under its SCORE (Southern California Optimized Rail Expansion) program. Work will include adding a sixth track and upgrading the signal system from outdated relay logic technology to modern digital systems. This work is scheduled to be finished in 2023.

“There’s immediate benefit with those upgrades where we can have following moves and freeing up the control points through the throat,” says Justin Fornelli, chief of program delivery for Metrolink.

Operating 407 route-miles across six Southern California counties, Metrolink is forging ahead with its ambitious $10 billion SCORE program to ready the Los Angeles region passenger railroad for the 2028 Olympics and for continued growth in ridership.

Wiggins explains that the rush-hour commuter pattern that was prevalent 30 years ago when Metrolink started operations is no longer relevant today. “The surprise for us is that ridership increase is driven by the weekends,” she tells News Wire. “We’re seeing people use it for all types of reasons,” she adds, noting changes such as telecommuting and flex schedules, along with leisure travel and special events.

“SCORE is our premier program to really transform Metrolink over the next decade,” Wiggins says. The project’s goal is to offer peak-hour service as frequently as 15 to 30 minute intervals in both directions, along with additional off-peak and weekend trains.

Metrolink shares most of its network with Amtrak, BNSF and Union Pacific. With about half of its system single track, flexibility and scheduling is limited. The SCORE project will add capacity that will benefit all rail users.

Burbank Junction, which sees 100 movements daily including Metrolink, Amtrak, and Union Pacific, will get track and signal upgrades to allow for higher speeds.

Busy Fullerton Interlocking will be reconfigured and the BNSF corridor adds 4.8 miles of new third track in Placentia and Yorba Linda.  Elizabeth Lun, acting assistant director for the SCORE program, says they are also looking at a fourth main track that would enable separation of commuter and freight trains.

A new maintenance facility is to be built in Irvine. It will handle up to 15 consists of two locomotives and eight coaches each, providing train washing, cleaning and preparation of train sets to ready them for the next day’s schedule. The $169 million project is partially funded.

Additional rolling stock is not yet on order, but will be needed to provide expanded, more frequent service and could include multiple-unit trains, perhaps using hybrid, battery or fuel cell technology. “My vision is for a low-emission future,” Wiggins says.