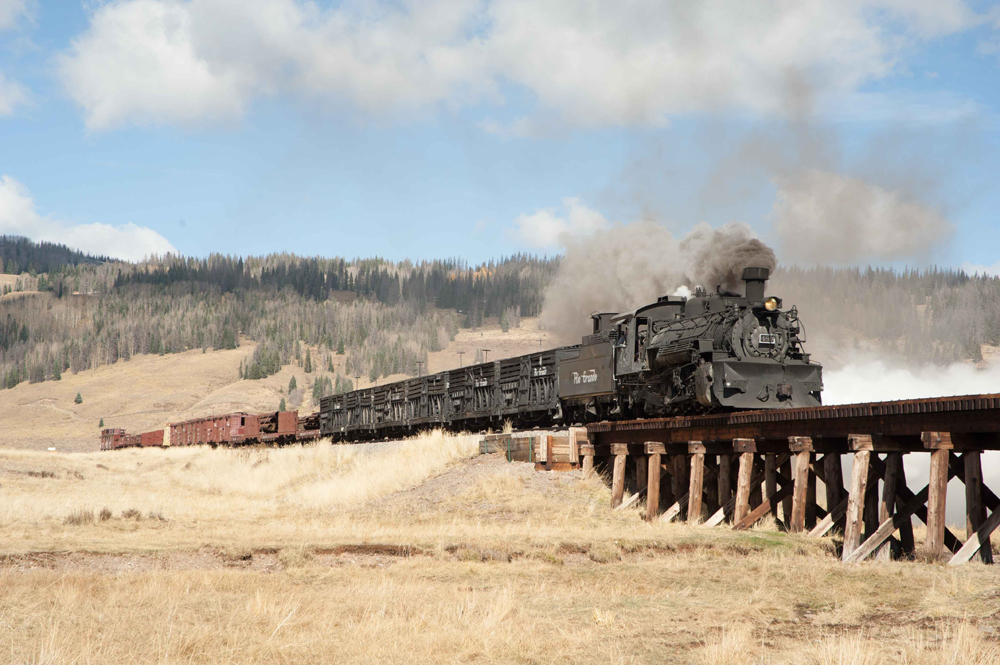 This two-day event will feature a 20-car freight pulled by double-headed Rio Grande K-36 Mikado steam locomotives, including No. 484 from the last run in 1968, and another K-36, which will be presented as No. 483 for this once-in-a-lifetime event. Participants will enjoy multiple photo runbys at exclusive locations, two hot lunches and a prime rib dinner with entertainment at Cumbres Pass on Saturday night, a night photo session on Friday, and the splendor of the Rio Grande narrow gauge in the San Juan Mountains. Every participant will receive a copy of our Colorado Railroads video and our forthcoming video Rio Grande Narrow Gauge Freights, a $50 value, as part of the ticketing.

Several articles about the Rio Grande narrow gauge appeared in Trains magazine in the 1950s and 1960s culminating with an October 1969 issue devoted to the narrow gauge when it looked like it would all be scrapped. In 1970, the most dramatic section, a 64-mile segment between Antonito, Colo., and Chama, N.M., along with nine steam locomotives, more than 100 freight cars, and servicing facilities were saved from the scrappers torch.

“The Cumbres & Toltec Scenic Railroad is a genuine functioning ‘time Machine,’” says CEO John Bush. “The ‘Time Machine’ is set for 1968. On Aug. 25-26, our time machine will carry 80 lucky people back there, using the same locomotives, the same cars, and traveling through the same unchanged scenery. Between Chama and Antonito, it is still 1968.”

“The Rio Grande narrow gauge on the Cumbres & Toltec is living history — an opportunity to step back in time, and in this case, we are stepping back to 1968, when one era of railroading ended and a new one began,” says Trains Editor Jim Wrinn. “If you’ve never been on a photo freight, or if you’ve never been to narrow gauge country, or if you’re a veteran narrow gauge fan, and you want to be there for this special anniversary, I hope you will join us.”

Tickets are available exclusively by calling the railroad at: 1-888-286-2737, and asking about the “Trains Magazine photo charter.”