The station at Jefferson Junction, Wis., might be small, but the area is big in details 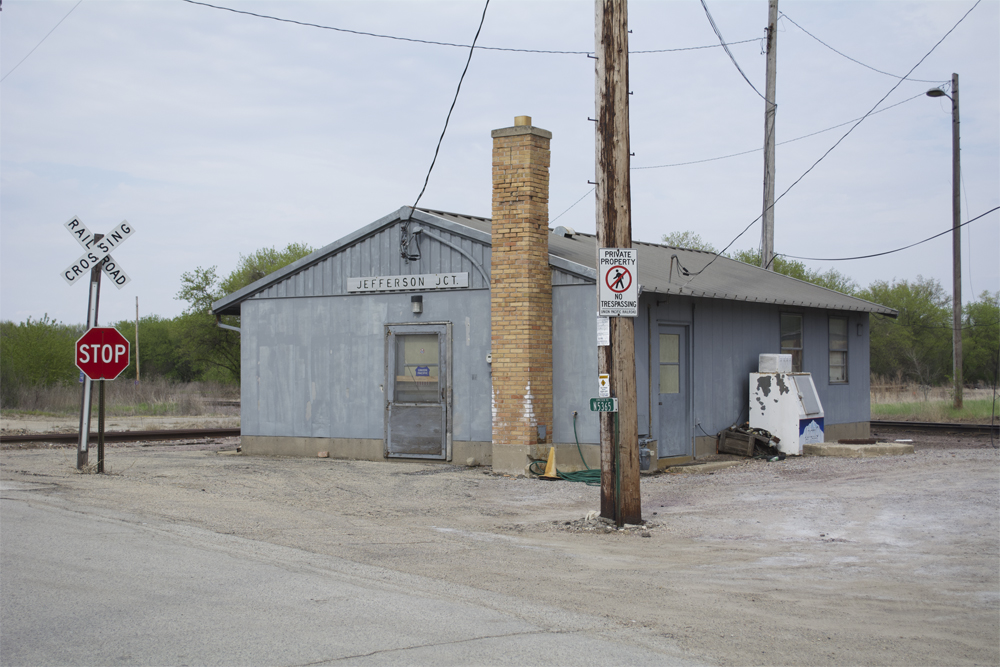 I’ve always had a soft spot for small stations. One such example can be found about 30 minutes west of Model Railroader’s Waukesha, Wis., headquarters in Jefferson. Just north of the city of 8,000 is a location on the Union Pacific (UP) called Jefferson Junction. When the Chicago & North Western (C&NW) operated the line, it was a bustling junction. The north-south line connected Fond du Lac and Janesville. The east-west line linked Milwaukee to Madison. A large wood depot was located along the east and south legs of the diamond. The towering Ladish Malting Co. elevator to the northwest of the station provided a steady stream of traffic. You can read about the heyday of Jefferson Junction in the October 1978 issue of the North Western Lines, the official publication of the Chicago & North Western Historical Society.

The wood depot was retired in December 1961 and replaced with an Armco metal building. Today, the junction is a minor location on the UP. Except for a mile-and-a-half stretch of track at Jefferson Junction, the Milwaukee-Madison line was abandoned and converted to the Glacial Drumlin Trail. The north-south line has been shortened at both ends. Today it runs from Clyman Junction, about 25 miles to the north, to Fort Atkinson, 10 miles to the south.

During a visit to Jefferson Junction on a quiet, overcast Sunday in May 2015, I took the opportunity to study the site. First, I looked at the station itself. Judging by the faded roller strokes, it appeared the metal building had been repainted a few times over the years, with gray being the color of choice. The brick chimney in the southwest corner of the building was something I hadn’t seen on many prefabricated buildings. A UP herald attached to the glass on the west door identifies the building’s current occupant. The weather-worn station sign above the door provides a clue to the line’s C&NW heritage. Other model-worthy details include a garden hose, a faded traffic cone, and an outdoor ice merchandiser. The utility pole, complete with climbing rungs, proved a convenient place to affix the no trespassing sign.

As I walked south from the station, there were a variety of details to examine. The railroad brought in a 20-foot intermodal container for additional storage. A door cut into the side provides employee access, and a pair of wind-driven turbine ventilators keep the air circulating inside. A red cabinet in front of the container is used to store flammable liquids. Other items near the container included an old signal bungalow, a discarded tractor tire, joint bars, tie plates, spike kegs, miscellaneous buckets, and two jugs of laundry detergent.

Continuing south, it became obvious Jefferson Junction was the central storage point for track supplies on the branch. Concrete panels and wood planks for grade crossings were neatly stacked in two separate piles. To learn more about grade crossings, check out my article, “Six grade crossings you can model” on Trains.com.

Adjacent to the crossing materials was track hardware. Joint bars, rusty metal storage bins, and shrink-wrapped pallets with spike kegs were grouped together. A tie-replacement project was taking place during my visit. New crossties were stacked east of tracks.

A few lengths of rail were stored at the far south end of the junction. The rail was placed on crossties. This makes it easier to lift the rail, either with a crane or a front-end loader with forks. The piece of rail closest to the road had a couple sections of the web painted white. Upon closer examination, I discovered this was a compromise rail. The single piece of rail provides a smooth transition between rail sections of different weight, eliminating the need for compromise joint bars.

Before I left, I took a picture of the mailbox to the west of the depot, which features a Chicago & North Western “ball-and-bar” herald. After years of being exposed to the elements, the red ball and “Chicago System” lettering had completely faded. The black bar with the “And North Western” lettering was still holding strong, even though the metal box had more rust than paint.

The Jefferson Junction station isn’t offered as an off-the-shelf model, so kitbashing or scratchbuilding would be the way to go if you want to re-create the structure. Below are options on how to source the details in HO scale:

Fashion from solder or solid wire

All Scale Miniatures no. 899