Home / How To / Prototype Railroads / Do you know where your boxcar is? 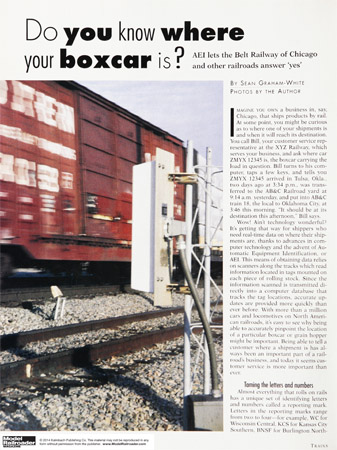 In the December 2014 Model Railroader, Seth Neumann and Chris Drone wrote an article about using radio-frequency identification (RFID) and a computer to track rolling stock and new possibilities for operation.

Prototype railroads have been using scanning technology since the late 1960s. Automatic Car Identification (ACI) used an optical reader and a color-coded plate to identify rolling stock, but the system began to fail as the plates got dirty or the colors faded. It was abandoned in the late 1970s. Automatic Equipment Identification (AEI) uses a system based on RFID technology and was instituted in North America in the late 1980s with full compliance by the end of 1994.

One thought on “Do you know where your boxcar is?”