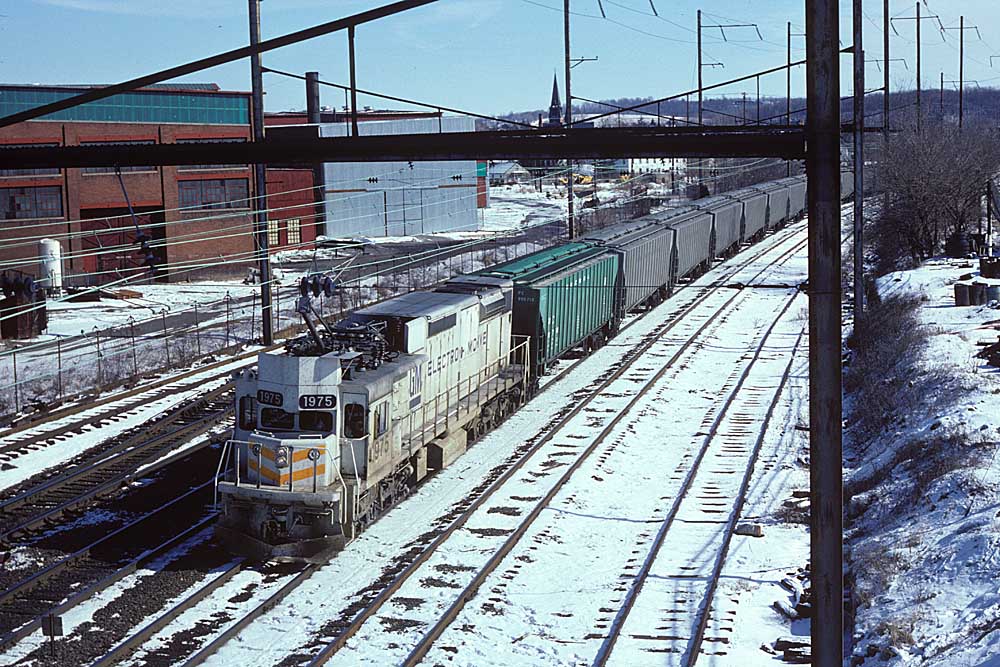 The GM6C began testing in 1975, the GM10B in 1976. The only practical choice for evaluation at that time was on the Penn Central, which was in the final stages of its bankruptcy and about to become Conrail. You could hardly select a more indifferent operating environment.

The railroad had no money to spend maintaining or troubleshooting someone else’s locomotives, and discouraged management had its hands full just operating the basic service with its own tired equipment.

The electrics demonstrated they were capable when and if they were run, but the railroad was understandably skeptical of this new, unproven product from a manufacturer with little electric locomotive experience.

It was hardly a surprise that one of the technical engineers was passed an insult by a shop manager who said that the best tool for measuring the availability of the two electrics was a stopwatch.

They did have their moments though, and one of the better features was the ride quality of the very unusual

B-B-B-trucked GM10B. Several people commented on how stable the locomotive was and that it surprisingly negotiated track that was in very poor condition. One rider mentioned pulling through a yard where the rail had many low joints and watching the freight cars rock back and forth behind the GM10B which was giving little indication in the cab of how bad the track was underneath.

As the test period progressed, EMD’s Engineering Department was able to get useful information back about the functioning of the new products. This was valuable for the design process of a new electric passenger unit that would be bid the next time Amtrak put out a Request for Proposals. The passenger carrier was continuing to deal with E60CP issues and the opportunity to build some new passenger electrics was soon to arrive.

Meanwhile, the overall situation for electric freight locomotives was moving from bad to worse. In 1973, in the wake of the Regional Rail Reorganization Act, Amtrak had begun acquiring portions of the Northeast Corridor that were not already owned by regional transportation authorities. By the time Conrail was formed in 1976, the passenger carrier owned the entire corridor except for portions owned by Massachusetts Bay Transit Authority and Connecticut Department of Transportation.

In the mid-Atlantic region, Amtrak also owned the electrical distribution network on the former Pennsylvania Railroad lines, a major part of electric freight operations in the Eastern U.S.

Amtrak’s mandate was to operate passenger service, not haul freight, and the Conrail freight traffic on the electrified lines was increasingly unwelcome. Amtrak initiated surcharges on electricity and car movement, and Conrail responded by moving as much of its traffic as possible onto its other lines that paralleled the electrified routes. Conrail was retiring the electric locomotives passed along from Penn Central, except for the ex-Pennsy GE E44 units, and there were no signs that the need for new electric freight units was going to surface again.

In this environment of lack of need and neglect, the EMD electric freight locomotives continued to test for several years. The GM6C was versatile and was operated on many parts of the Conrail electrified system. The GM10B was more of a specialty locomotive for high-speed, high-value freight, and tended to be operated between Harrisburg, Pa., and Kearny, N.J., on intermodal trains operated at night to keep out of Amtrak’s way during daylight.

Conrail decided in 1982 to discontinue electrified freight operations and dispose of their remaining dedicated locomotives. This slammed the door on any prospect of a large market for new electric freight locomotives developing in the United States.

Diesels were improving in efficiency and effectiveness, and no railroads were interested in the GM6C and GM10B. They were quietly returned to La Grange and slowly deteriorated in the back lot while various parts were “liberated” from them for use in other engineering prototypes.

Years passed, they deteriorated, and finally were relegated to the scrap yard. No museum stepped up to preserve them and their passing went almost unnoticed.

The effort that went into them was not wasted, however. Two subsequent orders for EMD electric freight locomotives were handled by affiliates using technology based on the experience with the GM6C locomotive.

Electro-Motive’s involvement in the electric freight locomotive market was brief. Despite the failure to sell the GM6C or GM10B in the U.S., overall, it was successful. Ultimately, it was the failure of the market to expand in the manner many had predicted in the early 1970s that ended the efforts to sell EMD electric freight locomotives in the U.S.