The U28CG and U30CG models did what they were designed for, but only for one railroad 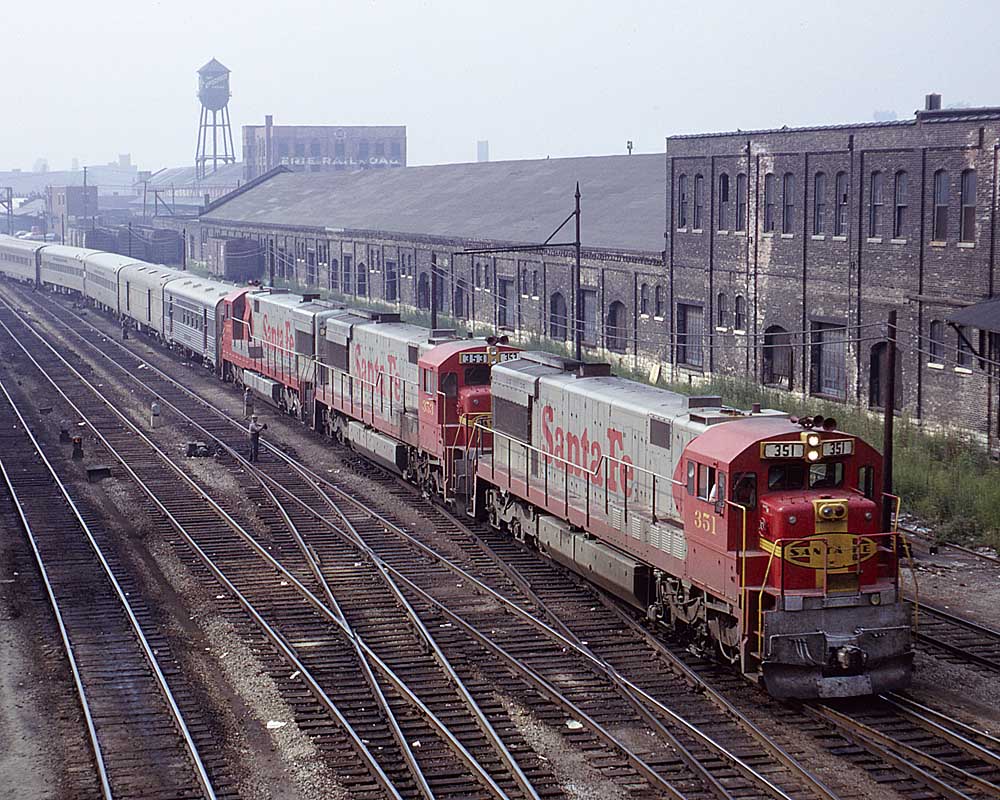 The General Electric passenger U-boats filled a niche in the 1960’s locomotive market. Santa Fe, like many Class I railroads at the time, was still proud of its passenger service. But its roster of suitable diesel locomotives was getting old and any thought of Amtrak was still years away. Keeping its aging fleet of silver and red passenger diesels in good operating order was becoming more difficult by the trip. The Alco PAs and EMD Es and F3s were on their last legs, putting the burden on its fleet of F7 A and B units. The roster was becoming too small to adequately service the fleet and if several of them fell down at one time the railroad would be in a severe locomotive crunch.

Competitor railroads were in the same predicament. Union Pacific’s fleet of E units was starting to get cranky. Supplementing them were several four-axle first-generation Geeps with steam generators. The railroad ordered many of its EMD GP30Bs with that accessory as well.

Southern Pacific was retiring its Alco PAs when they had major breakdowns and its small fleet of EMD FP7s was supplemented by some freight units equipped with boiler controls. Another small group of steam-generator equipped EMD GP9s was also available.

This mix and match approach didn’t especially appeal to Santa Fe management, and they searched for another alternative. The answer came from locomotive builders GE and EMD. Both were successfully marketing six-axle road-switchers with space available under the long hood that could be filled by a steam generator. General Electric passenger U-boats got the first nod.

Externally the first offering pretty much looked like a regular freight U28C, a six-axle 2,800 hp road switcher except adorned in a splashy slightly modified Santa Fe red and silver instead of freight blue and yellow. Tyros could spot the bulge in the left side of the long hood where GE engineers successfully carved out additional room for the Vapor-Clarkson generator and its auxiliary equipment. Ten joined the roster numbered 350-359 between July and August 1966.

Considering they were among the first GE locomotives to power Santa Fe passenger trains, crews had to get used to the subtlety different handling techniques over the EMDs but soon trios of them were regularly assigned to long distance trains.

Santa Fe management was happy enough with their performance that management returned to General Electric for more, but this time six cowl versions of the newer-in-the-catalog 3,000 hp U30C. Dubbed U30CG it was respondent with fluted stainless steel side panels. GE delivered them in November 1967 with numbers 400-405. This would be Santa Fe’s last passenger order for GE. A few months later the first of the red-and-silver 3,600 hp EMD FP45s would be on the property.

The units operated for just a few years in passenger service. A derailment involving a U30CG in Illinois led Santa Fe management to take the side of caution. They pulled both models of General Electric passenger U-boats from the high-speed passenger pool and re-assigned to freight duty.

Santa Fe renumbered the U28CGs 7900-7909 and the U30CGs 8000-8005. As they came due for shopping, yellow-and-blue replaced their red-and-silver passenger colors. Shop crews re-geared both models to 74:18 for their new assignment.

The units roamed the Santa Fe in general freight service although were seen most often working in and around Colorado. Finally, in 1980, after giving good service as “just another freight unit” they became trade-in fodder for new GE B36-7s.