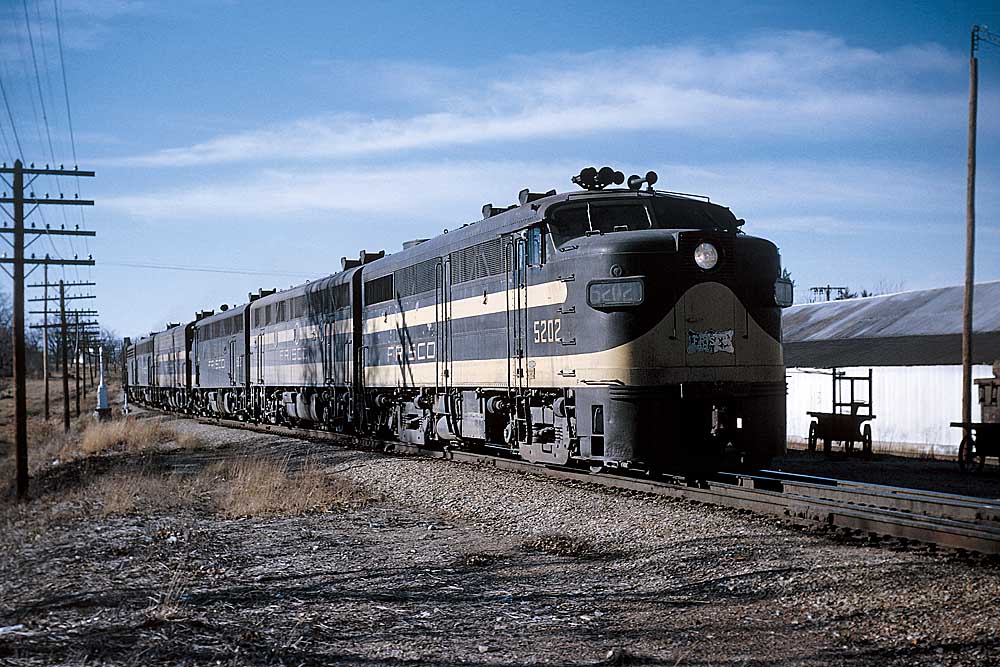 The St. Louis-San Francisco Railroad was a survivor and an innovator. It weathered some very rough times, including at least five bankruptcies. It started running unit coal trains from Fort Smith, Ark., the city across the Arkansas River from my hometown of Van Buren, in the 1930s. It helped move Texas and Oklahoma oil east during World War II. It was among the first big railroads to dieselize, in 1952. It was one of the first to be in a coast-to-coast run-through freight-train operation, with Santa Fe and Seaboard Coast Line. It ordered some of the first pioneering U25B diesels from General Electric. It developed the tri-level auto-rack, which helped recapture much of the nation’s automobile traffic from the truckers. It was the first large road to consolidate its train dispatching into a central office, in Springfield, Mo.

The Frisco was a great system, and I am a Frisco fanatic and proud of it. Until I completed graduate school, I lived no farther than five or six blocks from Frisco tracks. My only memories of Class I railroad steam are visions of Frisco engines on the front of passenger trains seen from a coach window as we rounded curves. During my freshman year at the University of Arkansas in Fayetteville, I made sure to see the passenger train — the Meteor’s Fort Smith section — every night. As soon as the train stopped, I was on the engine talking to the crew. Those friendships lasted many years; they led to exciting times riding the cabs of passenger, freight, and switch engines.

When the A&P went bankrupt, the Missouri Pacific Railroad and the St. Louis & San Francisco Railway were formed. The latter would use “SLSF” as its initials and reporting marks until the end, but everyone quickly called it by the nickname of the big California city. SLSF used Missouri Pacific tracks into St. Louis until completing its own.

In the 1870s and 1880s, Frisco began to increase its mileage dramatically. It built tracks south from Monett, Mo., through Fort Smith to Paris, Texas; west from Pierce City to Tulsa, Okla., and also to Wichita and Ellsworth, Kans. It extended southwest from Tulsa to Oklahoma City, Okla., and on to Quanah, Texas. A line from Sapulpa, Okla., went south to Dallas and Fort Worth. For several years, beginning in 1879, Frisco was under control of the Santa Fe, which during this time completed its line to California using land grants that had been issued to Atlantic & Pacific for the Frisco’s line to San Francisco.

Under the leadership of Gen. B. F. Yoakum as general manager, president, and chairman of the board, Frisco became a system serving the Southeast as well as the near Southwest. It reached to Kansas City, Memphis, and Birmingham, Ala., through the lease of the Kansas City, Fort Scott & Memphis, whose tracks the Frisco crossed in Springfield, Mo. Frisco built a line from Amory, Miss., south to Pensacola, Fla., on the Gulf of Mexico, and later acquired the Alabama, Tennessee & Northern, giving it access to Mobile.

The Frisco was a family type operation whose employees took great pride in their railroad. They put its famous “coonskin” logo on structures as well as rolling stock. Legend has it that the emblem originated from an official discovering a raccoon hide drying on the side of the station at Neosho, Mo. Employee pride was also evident in the care given to locomotives, diesel as well as steam.

The St. Louis-San Francisco Railroad, in my opinion, had some of the most handsome steam locomotives ever built, sporting clean lines and visored headlights hung from smokebox fronts. Many passenger engines, ranging from modern 4-4-0s to upgraded heavy 4-8-2s, had gold lettering and gold striping. Freight 4-8-4s were delivered with “fireball”-style “Frisco Faster Freight” lettering on their tenders.

Management was conservative, not wasting money on fancy appliances for its locomotives. Near the end of the Depression, Frisco began experimenting with rebuilding old locomotives into more modern machines. Seven 2-8-2s were rebuilt from 2-8-0s, 10 4-6-4s from 4-6-2s, and 34 fast 4-8-2s from 2-10-2s, arguably the most dramatic transformations. The 4-8-2s received new cast steel beds and cylinders, keeping their huge boilers, and the first 22 received Scullin disc drivers from on-line Scullin Steel in St. Louis. Frisco’s last steam engines were 25 4-8-4s built by Baldwin in 1942-43.

The road also did some serious experimenting with streamlining, on Pacifics, Hudsons, and Mountains. The most radical was on three 4-6-2s for the Firefly, a Kansas City-Oklahoma City train. Heavyweight cars got some streamlining to match the locomotives.

St. Louis-San Francisco Railroad ran passenger trains to the Southeast, including the Kansas City-Florida Special and the Sunnyland, and others with great regional names including the Black Gold, Oklahoman, and Will Rogers. But its top name trains were the St. Louis-Oklahoma City Meteor and the Texas Special, run jointly with Katy from St. Louis to San Antonio via Vinita, Okla. The 1942 Meteor was assigned three 4-8-4s lettered for the train and painted blue-and-white like the cars.

After World War II, Frisco ordered 38 streamlined cars from Pullman-Standard to re-equip the Texas Special and Meteor. The only lightweights in the road’s history, they had stainless-steel fluting, bright red roofs and window areas, and maroon skirts. Each carrier supplied one complete train for the overnight Texas Special, and Frisco owned two trainsets for the Meteor; extra cars were used on the Kansas City-Florida Special. Both the Texas Special and Meteor for a time had through sleepers to cities beyond St. Louis, and Meteor cars served Fort Smith; Lawton, Okla.; and Joplin, Mo. The Meteor and all but two other runs came off Sept. 17, 1965, and discontinuance of the K.C.-Birmingham Southland in December 1967 made the 4,565-mile Frisco the largest freight-only U.S. railroad at the time.

Frisco took great pride in its diesels. In my youth, our local roundhouse at Fort Smith was home base for 40 or so GP7s, a half dozen Baldwin VO switchers, and the road’s eight 44-tonners, and they were kept as the shiniest black diesels you’d ever see. Early switchers, like those three 4-8-4s, were dark blue with a white stripe, but when road diesels came, the switcher fleet went all-black. Frisco and Katy each bought two E7s for the Texas Special, and St. Louis-San Francisco Railroad bought four more for the Meteor, then added 17 E8s to replace steam. In the beginning, the E7s had stainless-steel fluting to match the cars. Later, all 23 Frisco E units were named after famous horses and painted red and gold. The names began to disappear in the early ’60s as a simplified red-and-yellow was applied, and in the last days of passenger service, three E8s were repainted into the bright Mandarin orange and white introduced on freight units in 1965 for better visibility.

The road freight diesel fleet included EMD Fs and Alco FAs (about half later re-engined with EMD 567s) wearing an attractive black and yellow. Frisco ads in the Official Guide for freight featured artwork of four F3-powered trains lined up. Road-switchers, mainly 128 GP7s, were solid black with yellow end stripes. There were also 11 RS1s, owned by AT&N, plus 5 RS2s, which were re-engined with derated 567Cs.

The first order of GP35s and the first two orders of U25Bs (one with high short hoods, one with low) were black, but the next orders came in orange and white. Frisco took 33 GP35s and 32 U25Bs, then went for 49 SD45s before returning to four-motor GEs, amassing 71 in three models, including the first and last production U25Bs plus four demonstrators, the last U30B, and the first B30-7. Its GP7s were replaced by 146 GP38s and GP38-2s; meantime, 46 SW1500s, and five MP15s replaced the yard-goat fleet of Alcos, Baldwins, and Fairbanks-Morse H10-44s.

Although gone for nearly four decades, the St. Louis-San Francisco Railroad remains alive in the hearts of its admirers through the Frisco Museum in Springfield, Mo.; two operating steam engines; dedicated e-mail list-servers; and miniature railroads in our homes.

Yes, the Frisco was a great railroad.