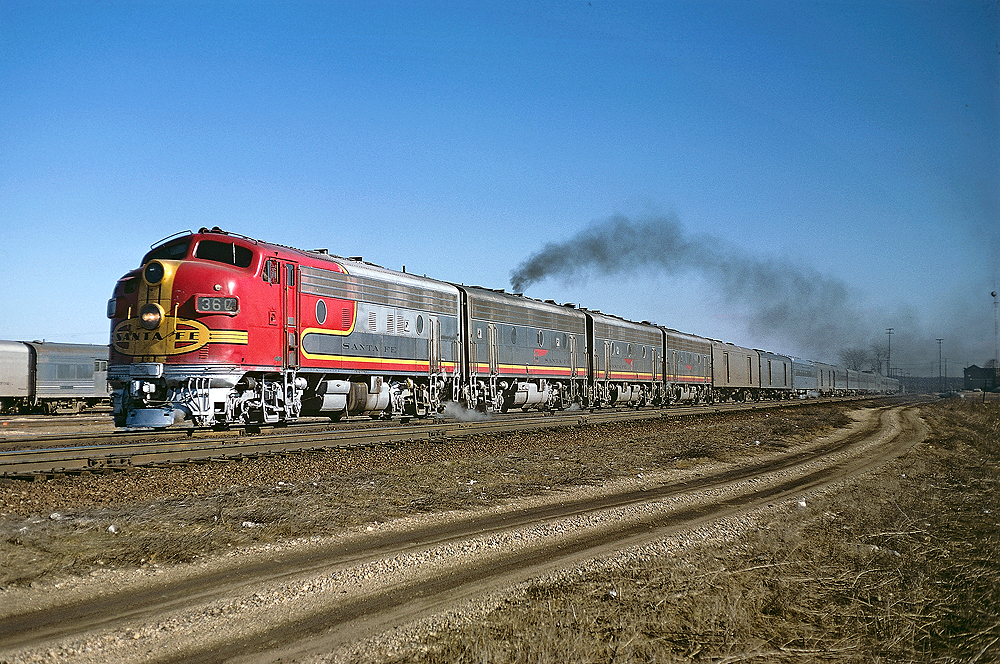 History of the Santa Fe Railway
The Atchison & Topeka Railroad was chartered in 1859 to join the towns of its title and continue southwest toward Santa Fe, New Mexico.

“Santa Fe” was added to the corporate name in 1863. Construction started in 1869; by the end of 1872 the railroad extended to the Kansas-Colorado border, opening much of Kansas to settlement and carrying wheat and cattle east to markets. The railroad temporarily set aside its goal of Santa Fe — once the trading capital of the Spanish colony in that area — and continued building west, reaching Pueblo, Colorado, in 1876, just in time for the silver rush at Leadville, Colorado.

In 1878, the railroad resumed construction toward Santa Fe, building southwest from La Junta to Trinidad, Colorado, then south over Raton Pass. It chose that route instead of an easier route south across the plains from Dodge City because of Native American attacks and a lack of water on the southerly route and coal deposits near Trinidad, Colorado, and Raton, New Mexico.

Clash with the Rio Grande
The Denver & Rio Grande was also aiming at Raton Pass, but Santa Fe crews arose early one morning in 1878 and were hard at work with picks and shovels when the Rio Grande crews showed up after breakfast. At the same time the two railroads skirmished over occupancy of the Royal Gorge of the Arkansas River west of Canon City, Colorado; the Rio Grande won that battle. 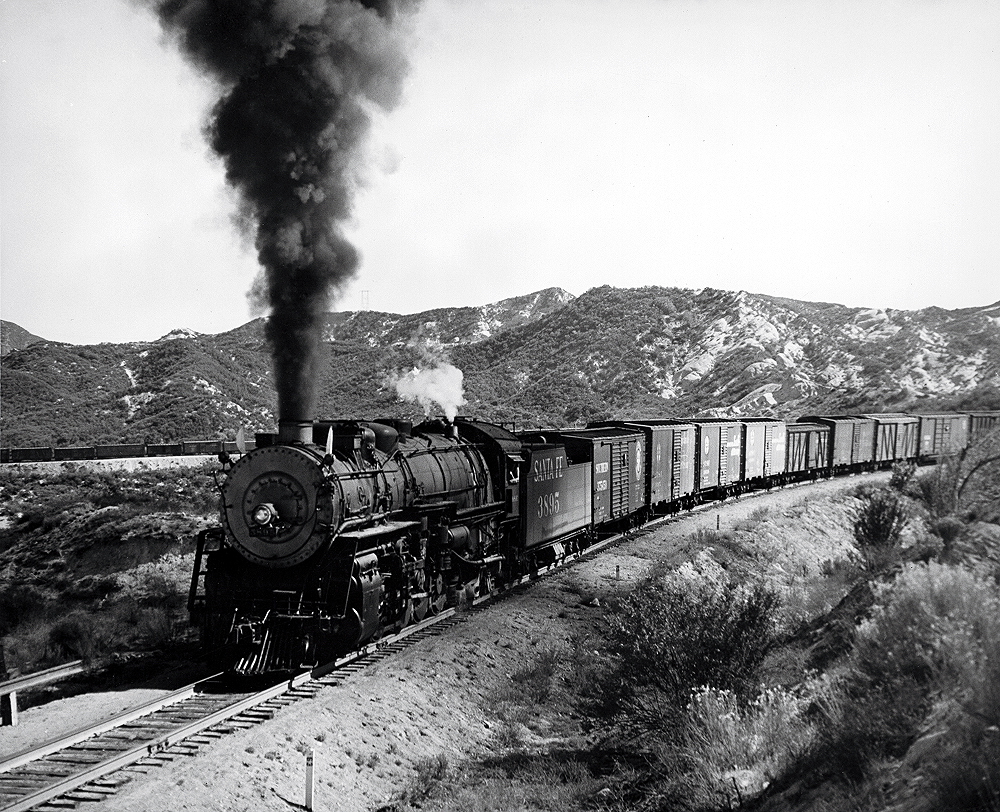 2-10-2 No. 3895 works slowly up California’s Cajon Pass with an eastbound freight in 1949. Because the railroad originated the wheel arrangement, the 2-10-2 type came to be known as the Santa Fe type.
Donald Sims

Atlantic & Pacific
The Atlantic & Pacific Railroad was chartered in 1866 to build west from Springfield, Missouri, through Amarillo, Texas, and Albuquerque, to a junction with the Southern Pacific at the Colorado River. The infant A&P had no rail connections. The line that was to become the St. Louis-San Francisco Railway (the Frisco) wouldn’t reach Springfield for another four years, and the Southern Pacific did not build east from Mojave to the Colorado River until 1883. The A&P started construction in 1868, built southwest into what would become Oklahoma, and entered receivership. As an operating railroad, the A&P dropped out of sight briefly, but not as a charter and corporate structure.

In 1879 the A&P struck a deal with the Santa Fe and the Frisco: Those railroads would jointly build and own the A&P west of Albuquerque. Construction began at Albuquerque, and in 1883 the A&P reached Needles, California, and a connection with the SP. Construction still hadn’t begun on the Tulsa-Albuquerque portion of the Atlantic & Pacific.

Expansion
The Santa Fe began to expand:
• a line from Barstow, California, to San Diego in 1885 and to Los Angeles in 1887
• control of the Gulf, Colorado & Santa Fe (Galveston to Fort Worth) in 1886 and construction of a line between Wichita and Fort Worth in 1887
• lines from Kansas City to Chicago, from Kiowa, Kansas, to Amarillo, Texas, and from Pueblo to Denver (paralleling the Denver & Rio Grande) in 1888
• purchase of the Frisco and the Colorado Midland in 1890

The depression of 1893 had the same effect on the Santa Fe that it had on many other railroads: financial problems and subsequent reorganization. In 1895 Santa Fe sold the Frisco and the Colorado Midland and wrote off the losses, but it retained control of the Atlantic & Pacific, and purchased it in 1898.

Subsequent expansion of the Santa Fe encompassed:
• a line from Amarillo to Pecos in 1899
• a line from Ash Fork, Arizona, to Phoenix in 1901
• the Belen Cutoff from the Pecos line at Texico to Isleta, south of Albuquerque, bypassing the grades of Raton Pass in 1907
• the Coleman Cutoff, from Texico to Coleman, Texas, near Brownwood in 1912 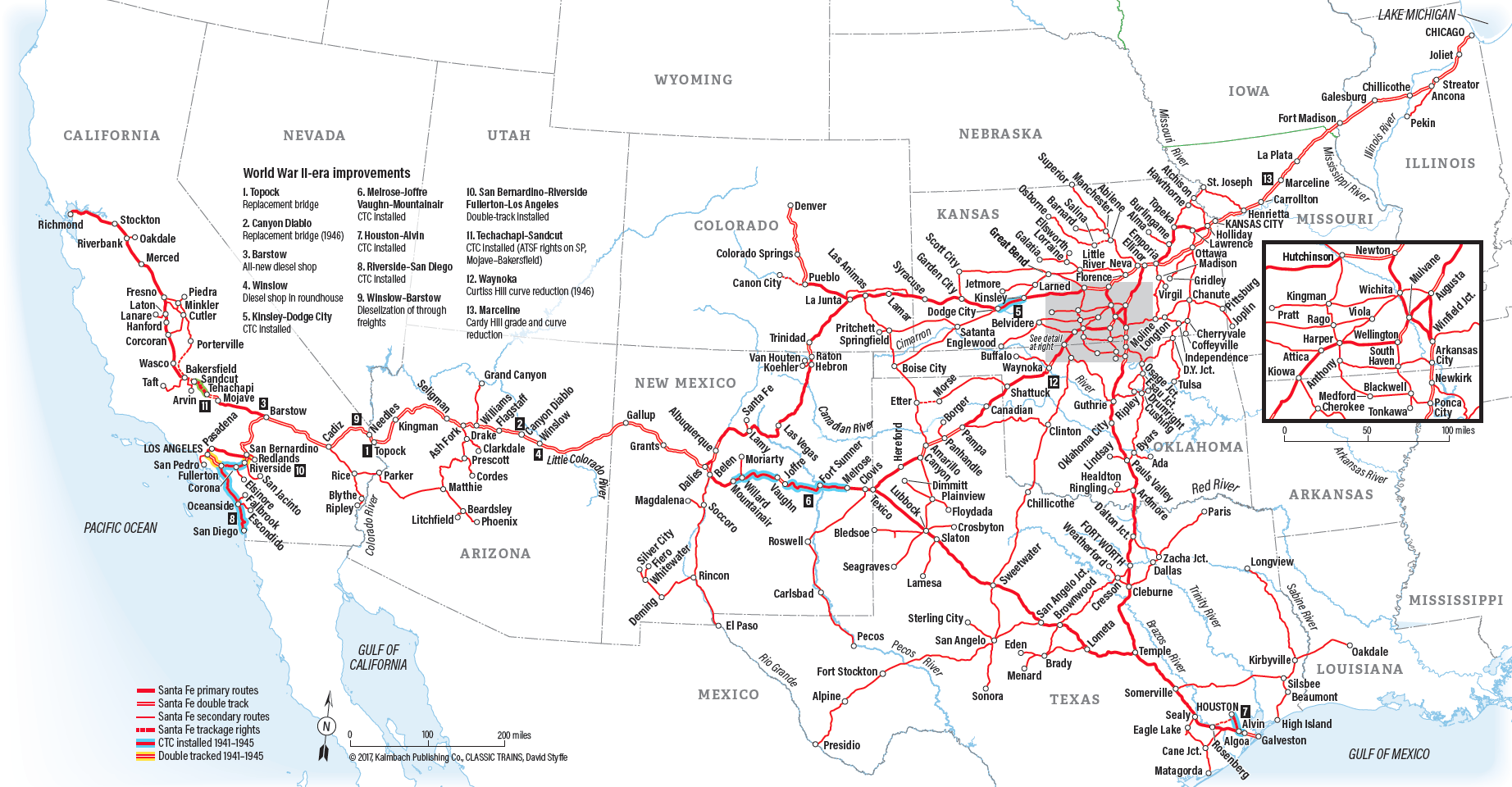 The Santa Fe Railway
Alone among railroads during the classic era, the Santa Fe extended from Chicago clear out to the Pacific Coast, giving rise to its famous slogan, “Santa Fe, all the way!”
Illustration: David Styffe

In 1907 Santa Fe and Southern Pacific jointly formed the Northwestern Pacific Railroad, which took over several short railroads and built new lines connecting them to form a route from San Francisco north to Eureka. In 1928 Santa Fe sold its half of the NWP to Southern Pacific.

Also in 1928 the Santa Fe purchased the U.S. portion of the Kansas City, Mexico & Orient Railway as a way to reach the oilfields of west Texas. Post-World War II construction projects included an entrance to Dallas from the north and relocation of the main line across northern Arizona.

Because long stretches of its main line traversed areas without water, Santa Fe was one of the first purchasers of diesel locomotives for road freight service. The road was known for its passenger trains, notably the Chicago–Los Angeles Super Chief, and for the on-line eating houses and dining cars operated by Fred Harvey.

Mergers
In 1960 the Santa Fe bought the Toledo, Peoria & Western Railroad, then sold a half interest to the Pennsylvania Railroad. The TP&W cut straight east across Illinois from near Fort Madison, Iowa, to a connection with the Pennsy at Effner, Indiana, forming a bypass around Chicago for traffic moving between the two lines. The TP&W route didn’t mesh with the traffic pattern Conrail developed after 1976, so Santa Fe bought back the other half, merged the TP&W in 1983, then sold it back into independence in 1989. 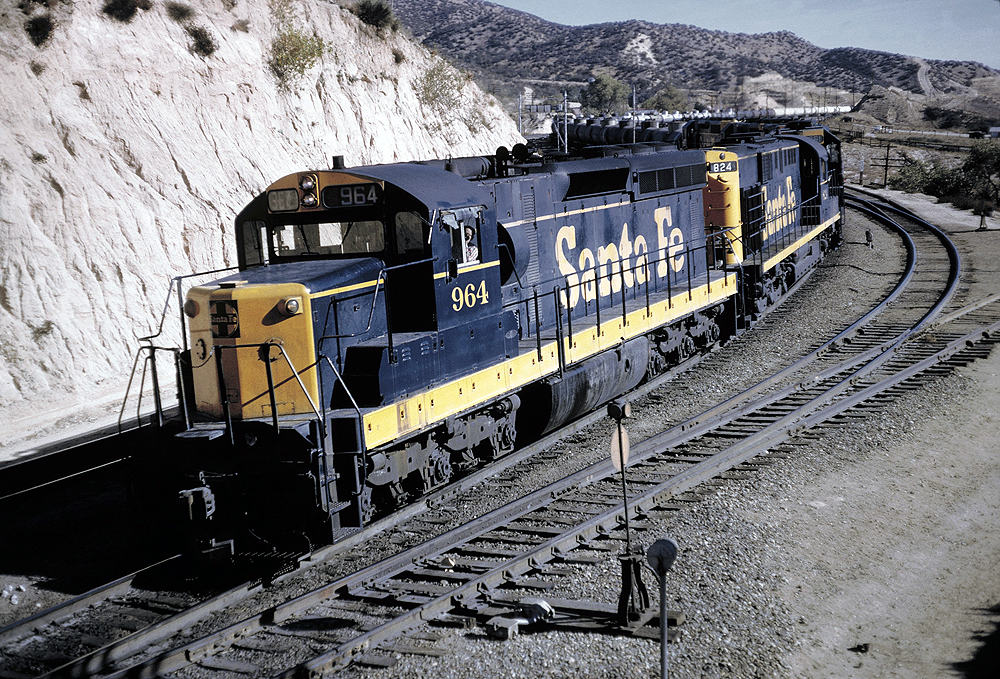 During the 1960s the Santa Fe explored merger with the Frisco and the Missouri Pacific with no success. By 1980 Santa Fe, which had been the top railroad in route mileage in the 1950s, was surrounded by larger railroads. It was well managed and profitable, and it had the best route between the Midwest and Southern California, but its neighbors were larger, and friendly connections had been taken over by rival railroads. Southern Pacific was in the same situation. In 1980 Santa Fe and SP proposed merger. Approval seemed certain, but in 1986 the Interstate Commerce Commission denied permission because the merger would create a railroad monopoly in New Mexico, Arizona, and California.

The Santa Fe, suddenly the smallest of the Super Seven freight railroads, began spinning off branches and secondary lines and became primarily a conduit for containers and trailers moving between the Midwest and Southern California. In June 1994 Santa Fe and Burlington Northern announced their intention to merge — BN would buy Santa Fe. The deal was consummated in 1995, forming the Burlington Northern Santa Fe, known today as BNSF Railway.