Check out these photos featuring trains at night submitted by our readers and railroad photographers. 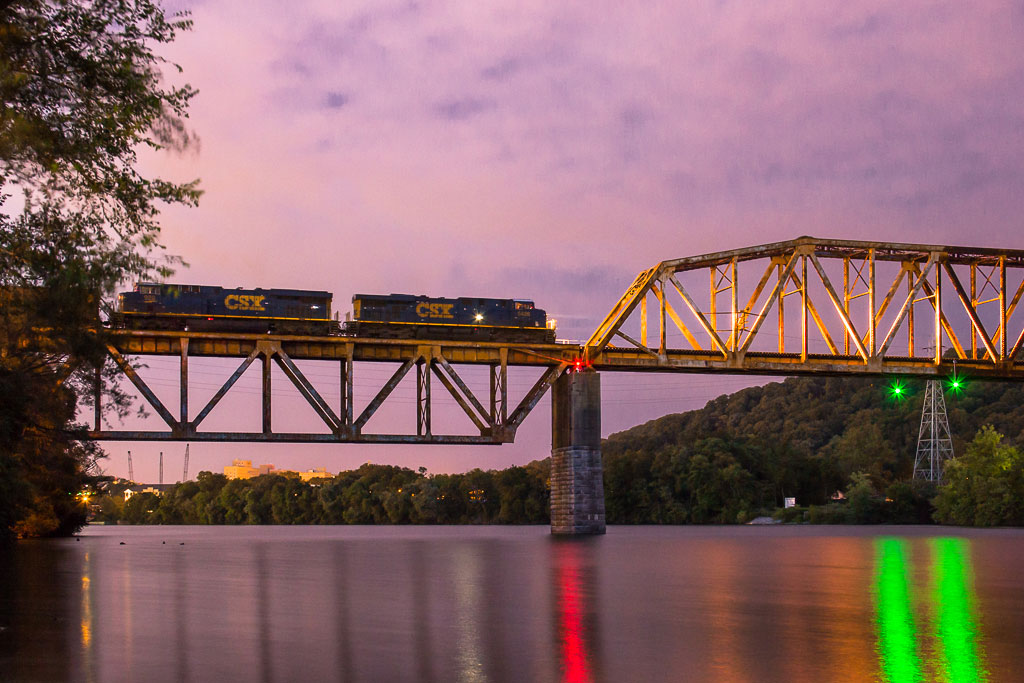 Plenty of power is gathered around the fuel racks at the North Platte Diesel Facility as the yard lights begin to fight the encroaching darkness. Even though night has fallen, Union Pacific's Bailey Yard never stops, evidenced by the auto racks rolling down into the East Hump bowl tracks at right. A CSX unit is the lone interloper in a sea of Armour Yellow at the fuel racks. This September 2008 view was made possible thanks to the then newly-opened, eight-story Golden Spike Tower, which provides two observation decks to view the yard action.
Christopher Blaszczyk

CSX Q539 illuminates the impressive bridge over the Tennessee River in downtown Knoxville on a beautiful first night of June 2014. While waiting to set off cars for a local scrap industry, locomotives 5426 and 928 pause for a moment as the conductor walks the train. The manifest would continue on the Atlanta after finishing its work around Knoxville. Noted rail photographers Chip Allen and Chris Starnes were also shooting this scene as we all enjoyed the opportunity to witness night operations on the old Louisville and Nashville mainline.
Jordan Hood

One of the highlights of the “Streamliners at Spencer” festival held at the North Carolina Transportation Museum May 29 through June 1, 2014 was the nightly night photo sessions. For three nights of the event, vintage cab unit diesels were placed at three different areas of the facility. A dozen vintage cab unit diesels were arranged around the turntable adjacent to the 37-stall Bob Julian Roundhouse for the night photo sessions, which were illuminated with continuous lighting. Participants were free to walk around the grounds and photograph the three displays. With the continuous lighting exposures could be bracketed and checked immediately after talking the photos, ensuring that the exposures were accurate. In this scene, taken on May 30, nine EMD cab units, plus Doyle McCormack's restored PA-1, were captured in one frame at the turntable.
Alex Mayes

On the second to last day of the Valley Railroad's 2013 North Pole Express Season, with the permission of the railroad, I set up in the south end of Essex yard to photograph the locomotives shuttling around in between the four nighttime runs. At the end of the night, veteran locomotive No. 40 was moving cars around the yard, and I grabbed a shot, using four strategically placed flashes, showing the conductor and engineer working the south end of the yard.
Tom Nanos

Night shots have always been a favorite of mine to do since I started taking railroad photos. I always liked the challenge of illuminating a parked train with my spotlight in certain amount of time. And timing is a crucial part of the equation when one is trying to illuminate a parked train with one passing in the background without overexposing the shot as seen here. Since the A&WP was having a tie replacement blitz during the date of the photograph, trains were routinely running at night after the curfew ended. This also meant that the local train A746 would be working at night as well since it could not get out during its normal daylight hours. Seeing them parked in Opelika one evening and hearing a Q612 on the radio, I decided to try a night shot of A746 parked as the lights from Q612’s locomotives passed it on the main. While waiting for Q612, I practiced my technique of illuminating A476 during a 45 second window a few times. Once I knew which areas to illuminate first before Q612 showed up such as the ground, background tree and power of A746, I ended up with what you see here.
Frank Orona

While out taking storm photos, I happened to notice these two units sitting on the north leg of the Bain wye. I knew the storms were approaching the location from the west, so I had a few minutes to set up the shot, as well as feed a few thousand mosquitoes.

You can see in the cloud just above the right-facing unit some of the coloration from the in-cloud lightning; also just in front of the same unit you can see a small lightning bolt. The storm cloud was actually fairly far away (about 25 miles – over South Milwaukee) so the lightning is rather smallish. What I hadn’t counted on was that the moon would make an appearance above the thunderhead.

The lettering and striping on the locomotives was illuminated by a separate flash unit. The camera was on a tripod.
Jim Ribar

After dropping off it's passengers, an outbound Metra leaves the Downers Grove Fairview Avenue station on a very cold February 12, 2013 evening on the BNSF District. The purpose for the stop on this night was to capture images of the Fairview Avenue signal bridge, one of the last remaining CB&Q era signal bridges on BNSF's triple track "Racetrack" through Chicago's suburbs. The signal bridges were rumored to fall in the not too distant future, but a late season burst of cold and snow helped prolong their life. The signals finally went dark 13 months later, in March 2014. Fairview was the only one that fell during the immediate cutover.
David Scharenberg

Check out these photos featuring trains at night submitted by Trains readers and railroad photographers. 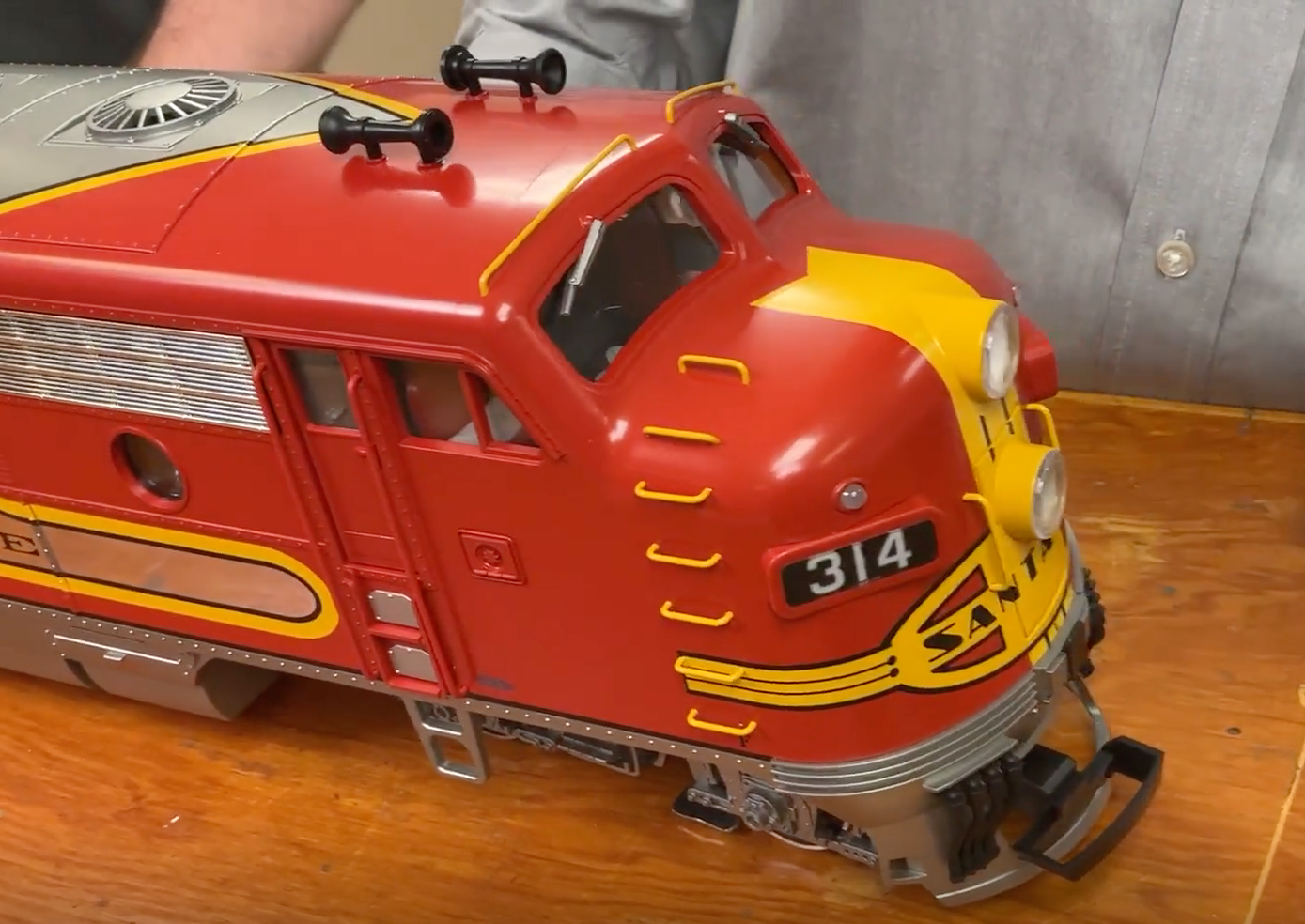