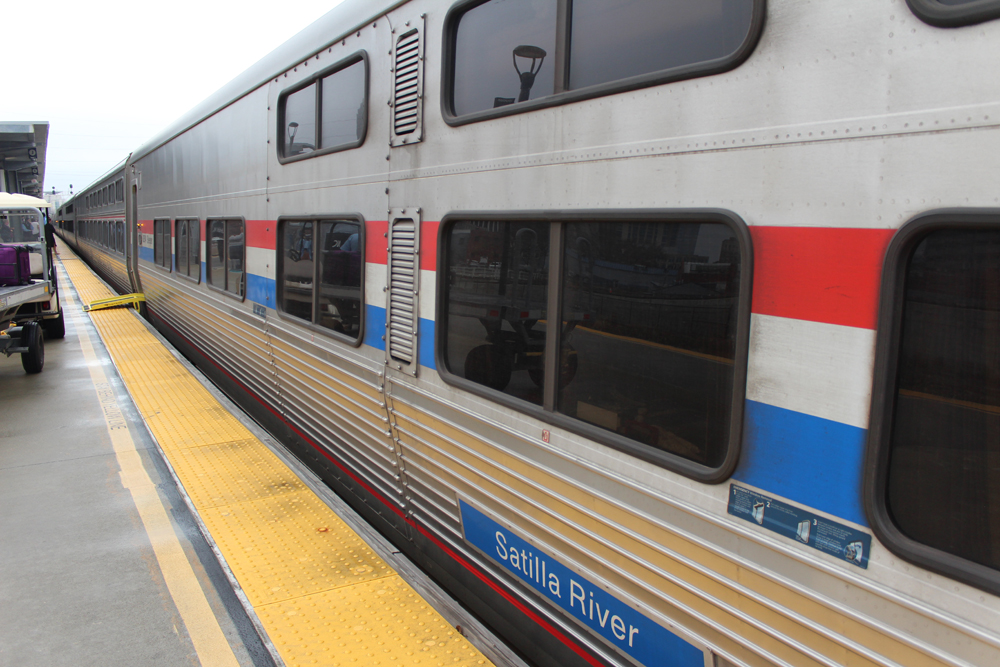 But the latest arrivals are now operating alongside what had been the newest rolling stock in the company’s overnight fleet: 50 Viewliner I cars which first entered revenue service in 1995. Trains.com rode in one of the new cars on the northbound Silver Star from Orlando, Fla., to Alexandria, Va., in February 2022.

Viewliners were conceived by Amtrak’s engineering and mechanical departments in the mid-1980s to address the need to replace hand-me-down heritage single-level sleeping and dining cars. Two prototype sleepers and one diner were assembled at the Beech Grove shops near Indianapolis using fluted stainless steel provided by Budd. The contribution was the veteran carbuilder’s intercity passenger car swan song.

Basic designs haven’t changed. Both versions of the sleeper offer a one-of-a-kind overnight experience in a roomette’s upper berth, seen here when the Star stopped at Cary, N.C. Yes, the windows are dirty — the train hadn’t been washed before it left  Miami — but it was also a foggy morning. Dusty glass is less of a problem, however, when gazing at passing towns in limited light conditions, on moonlit nights, or at sunrise when drifting in and out of sleep.

From a passenger standpoint, the most significant change is that the new cars don’t have in-room toilets. Instead, there are two unisex restrooms “down the hall” (the same arrangement  as in all Superliner roomettes). The pull-down sink has been retained (shown here in the closed position).

Replacing the commode are fixed shelves also serving as steps to the upper berth when it is pulled down from the ceiling. The wider steps are an easier target for feet to hit when climbing down at night or in the morning. Another plus is the extra space below the steps that can accommodate a carry-on-style rolling suitcase, which might not fit under the adjacent seat and remains available when the bed is down.

On the Viewliner II, the enclosed loft above the hallway is not as deep as on the older cars, so that black suitcase which fit comfortably under the wash basin protrudes into the room. This out-of-the-way cubbyhole comes in handy when two people are occupying a roomette, since Viewliners don’t have a separate baggage area as Superliners do. Yet it has always been difficult to lift and maneuver luggage into this space. Doing so requires the upper berth to be lowered slightly to swing the suitcase up and in; it’s best to have the sleeping car attendant assist. In the photo, a strap has been removed that is normally hooked to the ceiling. It is part of a harness that prevents passengers from rolling out of the upper bunk when the train lurches.

With wider folding flaps, a blond coloring that complements the roomette’s decor, and wide elbow cushions next to the window, the Viewliner II table seems much sturdier than the clunky gray metal tables installed in Superliners and Viewliner Is. It dwarfs the “flexible dining” spaghetti and meatballs entree at lunch as the Silver Star drifts above the former Seaboard station at North Weldon, N.C.

Although the car has bright LED lighting throughout (and is far superior for night reading than dimly-lit Superliner roomettes), simulated dark wood paneling in the halls make it warm and inviting. This is the view of the closed accessible bedroom door.

The ice and coffee stand has been relocated from the end of the car to a corner in the hallway between roomettes and bedrooms previously occupied by a linen closet and long-eliminated audio and video entertainment gear. Though this mini-pantry was not operational on the Silver Star trip, the ice container is now a sanitary dispenser rather than a slide-out drawer with a scoop.

Bedrooms have mixed reviews. As on the earlier Viewliners, each car has two standard bedrooms with a wider lower berth and enclosed toilet and shower. Beds are perpendicular to the windows rather than parallel to them, and for this reason do not provide the same overnight experience as a roomette.

Trains Magazine reader John Nicoles listed some other Viewliner II bedroom drawbacks in an unsolicited email. Among them were the constantly-rattling folding door between the two bedrooms (also a recurring problem in Superliners and Viewliner I bedrooms); sharp ladder steps to the upper berth (“it tears up your feet!” he says); and a blustery ceiling air vent. To counteract that complaint, attendants occasionally make the bed so the pillow is near the window, but Nicoles points out there is no upper-berth reading light at that end.

On the other hand, disabled passenger Doug McClair was extremely impressed and satisfied with his accommodation. Riding from Tampa to Washington, D.C., he invited Trains.com to observe how he could maneuver his motorized wheelchair to access the bed and wash basin. Visible at right of McClair in the photo, the simulated porcelain-lined sink bowl is a fixed adaptation of the roomette’s fold-up model. “If I don’t have this room, I can’t travel on the train,” McClair said.

OK, maybe taking a herky-jerky shower doesn’t make everyone’s bucket list for a variety of reasons, but the Viewliner II showers are definitely a cut above previous versions. The Viewliner I accessible bedroom has no shower, but one ingeniously appears in the same Viewliner II accommodation when the hallway door is closed. McClair confirms that this is a valuable improvement.

The public shower for roomette occupants at the other end of the car near the restrooms is brighter and much more spacious than the Viewliner I version. This is achieved by adding a mirrored dressing area, high ceilings, bright lighting and an enlarged shower stall with a rounded door.

A pleasant surprise occurs when stepping on a floor that has been cold in every other Amtrak shower room. Not here.

Instead, a vent at floor level blowing hot air keeps the surface warm and provides foot comfort when getting dressed.

Travelers can’t specify a car when booking online. An Amtrak call center agent told Trains.com, “They don’t tell us [which type of car operates in each line] because they don’t want whether the room does or doesn’t have a toilet to be a selling point.” Yet agents do have the ability to move or book a reservation to a specific room or car.

The only other train now featuring a Viewliner II is the New York section of the Lake Shore Limited in line numbers 4812/4912; the other New York sleeper and the Chicago-Boston car is a Viewliner I, as are all sleepers assigned to the Cardinal and Crescent.

Given the number of trainsets it takes to provide daily operation — even if, as at this writing in April 2022, trains aren’t running every day— Amtrak is currently operating 15 of 25 Viewliner II cars and 16 of 50 Viewliner I sleepers. This does not count spare “protect” cars that may be stationed in Miami, New York, Chicago, and New Orleans. It isn’t known how many sleepers of each type have been either temporarily or permanently sidelined, but it is likely additional Viewliner II cars will appear on more Eastern overnight trains in the near future.