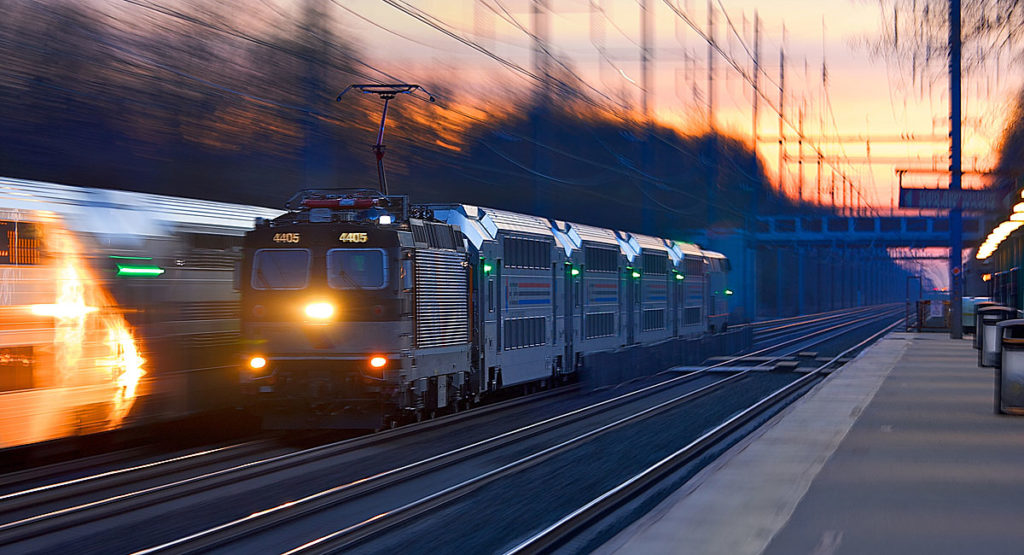 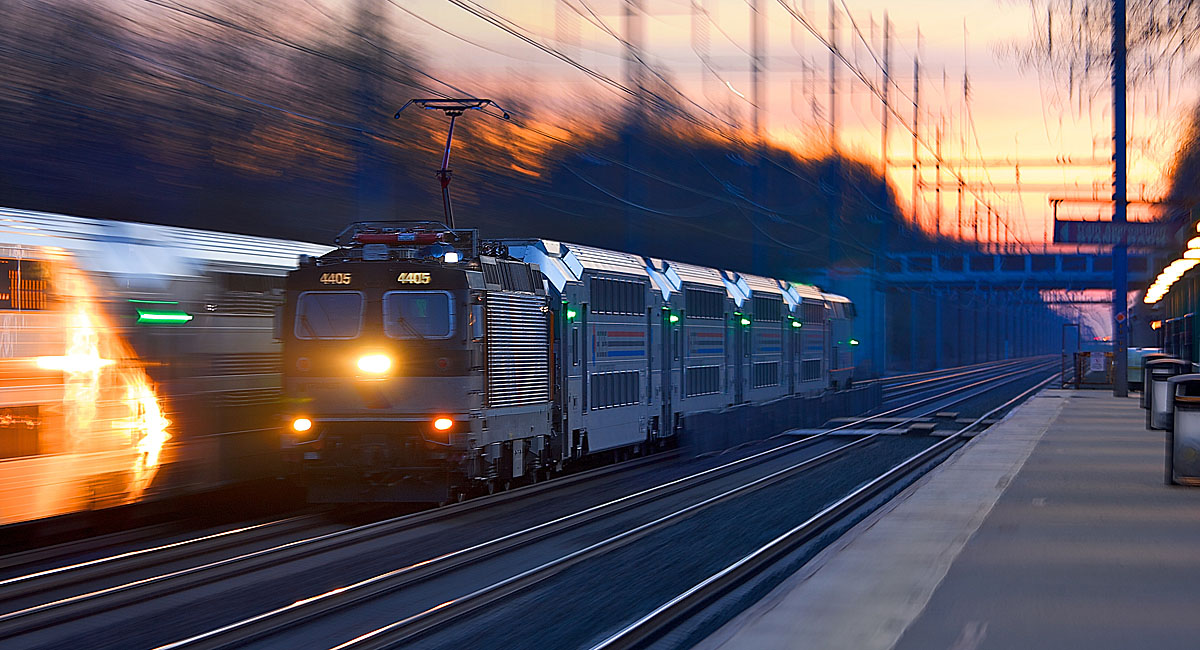 A New Jersey Transit train zips northward from Atlantic City to New York’s Penn Station on Jan. 23, 2010. If the crew were to err, they could report the close call and be part of a bigger program to improve safety, rather than be punished.
Dennis A. Livesay
No question, it is a violation.

That is, if an engineer forgets a speed restriction and proceeds at normal speed, it is a violation.

In the old days on New Jersey Transit, if no one else saw the speeding incident, that engineer would keep quiet and avoid the mandatory suspension of up to 30 days.

Now, with the Federal Railroad Administration’s Confidential Close Call Reporting system, the engineer can report his mistake and instead get a long interview to see what happened.

“Then we can look at meaningful ways to preclude that from happening again. The goal isn’t to say ‘gotcha’ to take people out of service or to fire people. It’s to make it so this becomes a safer environment,” says Kevin O’Connor, vice-president and general manager of operations for NJ Transit.

The Confidential Close Call Reporting program has its roots in the February 1996 collision of a MARC Maryland Rail Commuter train and Amtrak’s Capitol Limited near Silver Spring, Md. That crash killed 11 people. A National Transportation Safety Board report that followed cited “several close calls preceding the crash,” according to the U.S. Department of Transportation website.

The DOT concluded that reporting those close calls, or near misses, was the best way for railroads to study operating behaviors that prevailed, often without management awareness. Jo Strang, FRA associate administrator for railroad safety and chief safety officer, says on the FRA’s website that the program is now a “cornerstone” of its Risk Reduction Program.

The New Jersey commuter railroad has been part of the Close Call reporting system since November 2009. At that time, O’Connor was a deputy general manager for operations and a big supporter of voluntary reporting.

“I think it’s a benefit to employees and the railroad. [Railroaders] can honestly come forward with serious issues, mistakes, whatever you want to call them,” O’Connor says. Most close calls would otherwise end up unreported and without consequences for the railroader or the public.

“The hundredth time or the thousandth time we might not get so lucky,” he says.

NJ Transit’s employees can report any incidents they witness to a central data center that are combined with information from Union Pacific’s North Platte, Neb., yard; Canadian Pacific’s yard operations in Chicago; and Amtrak yards in various spots on the East and West coasts. Information then passes to the U.S. DOT’s Bureau of Transportation Statistics and NASA for technical analysis. Those agencies scrub the data of train numbers, locations, and information that could identify employees involved in mistakes before returning data sets to railroad-based Peer Review Committees composed of labor and management on each property.

Union Pacific was the first railroad to join the pilot program in February 2007, but a spokesman declined to comment. Messages to representatives for the Brotherhood of Locomotive Engineers and Trainmen International and to the United Transportation Union International offices went unreturned. However, Pat Reilly, general chairman of UTU Local 60, representing railroad workers on NJ Transit, did comment. Reilly was one of the local union members to negotiate a required memorandum of understanding between the unions, railroad, and the FRA.

Reilly says he first signed on with the Erie Lackawanna Railroad near Scranton, Pa., in the 1970s. He has since been a railroader, an NTSB accident investigator, and an FRA inspector.

“By far, this is the best safety program I’ve seen,” Reilly says.

As a union representative, he also likes how Close Call reporting has brought management and labor closer together, especially since near misses reported through Close Call take an alternate track, even if railroad management later finds out.

“No reprisals – if there was a concern, I would go to the VP and general manager. He won’t tolerate nonsense. Here, management and the union are on the same side,” Reilly says.

Now, with four years of data and more coming in, FRA officials are starting to see some results from the project.

“For the three carriers that have been operating the [Close Call] program for a year or more, the first six of the top 13 event types are identical among the carriers,” FRA spokesman Bob Kulat says. “In some cases, the underlying reasons for why these events occur are common across the three carriers. In other cases, operational differences appear to influence the different factors contributing to close call events.”

Kulat adds that the FRA does not have access to individual railroad data or to any specific incident. And only recently have officials had enough information to start analyzing patterns of incidents so they can be reviewed anonymously.

“Following accepted data confidentiality practices, [Close Call] could not report out results before there were enough railroads reporting to the system in order to obscure or anonymize the information source,” Kulat says.

While specific reports remain confidential, Reilly at NJ Transit says at least one mistake appeared that he did not expect would be a problem: opening the wrong door on a passenger train.

“A lot of stations are high-level,” he says, meaning that many station platforms are elevated to meet car doors for easy loading and unloading. “Sometimes the wrong doors are open. The passengers, like cattle, could flow and fall out onto the tracks.”

Even though NJ Transit hasn’t experienced an accident due to a passenger falling on the tracks because the wrong door was open, that does not mean that it could not happen.

“One wrong mistake could be tragic,” Reilly says.

Analysis of why those doors were opened incorrectly could be more difficult to determine. It could have been a mistake by an inattentive conductor. It could as easily be the result of poor instructions, poorly designed or damaged equipment, or miscommunication within the train crew.

Instead of discipline, what employees receive when they report the incident is a veil of confidentiality, a promise of protection from retribution from the railroad or the union and a thorough interview from Close Call investigators. They will ask questions leading to both a description of the circumstances leading up to an accident and employees’ frame of mind before, during, and after the incident.

That answer seeking beyond the raw, who, what, where, when, and how of the accident gives a kind of four-dimensional quality to the reporting — and makes it more valuable.

With the additional information in hand, railroad management and federal regulators can get into the minds of the railroaders to change or create rules, change schedules, routes, and instructions – anything that could affect a positive outcome for a similar future situation.

This makes the future for Close Call reporting indefinite. All involved seem to approve of the results they have received so far, but even the FRA declined to put a numeric goal for achievement, an end date for the pilot program, or a starting period for broader expansion throughout the United States rail system.

O’Connor, from NJ Transit, thinks that Close Call reporting, or something like it, will eventually become the primary safety reporting method for all railroads.

This story originally appeared in the March 2012 issue of Trains Magazine.

2 thoughts on “The ‘gotcha’-free zone”